IT GETS so incredibly relatable, that the soul-baring of Mace (Angelica Panganiban) and Anthony (JM de Guzman) makes one feel like an eavesdropper.

Total strangers, fast friends, potential lovers—it must be fate. Or, at least, deep attraction for the interim. Whichever the case, Antoinette Jadaone’s “That Thing Called Tadhana” succeeds in smartly telling that special tale, a relatable romantic comedy that often shifts into a tearjerker of epic proportions.

With a title like this, one can’t help but be mindful of that momentous first meeting. It starts at an Italian airport with a weepy Mace (Angelica Panganiban), a young woman bound for home, ditching personal stuff from her overweight luggage. A kind stranger, fellow Filipino Anthony (JM de Guzman), who declares himself neither a “manyak o magnanakaw” (pervert or thief), offers to help out, so she wouldn’t have to throw away her things.

That’s just the start of an inevitable, if strange, friendship. Anthony immediately learns that Mace carries heavy baggage inside as well, having just broken up with her longtime boyfriend. She needs a shoulder to cry on, and there’s something about Anthony that makes her spill out her true feelings. In time, the scenario leads to an unprecedented journey of discovery and deconstruction.

“Tadhana” eschews the typical rom-com rotes; its free-flowing conversations mirror real-life interactions, down to the awkward pauses. It’s not groundbreaking, to be sure, but the film is certainly creative enough, showing two characters that are genuine, recognizable persons with personalities and thoughts that the audience can identify with—often throughout its roughly 90-minute running time.

It gets so incredibly relatable that the soul-baring of Mace and Anthony makes one feel like an eavesdropper, privy to information likely to come only from the oldest of friends, and in the most secure of places.

It slowly makes us root for the companions who, rather impulsively, decide to go to Baguio before going home to their families, shortly after they reach Manila. The candidness works; cuteness naturally ensues. Scenes like the two in a videoke joint, singing (off-key) Whitney Houston’s “Where Do Broken Hearts Go”—legally used here, by the way—are predictable, but no less endearing.

Another thing that it does right is focusing on these 20-somethings’ lives; they’re somewhat jaded, their early dreams faded or replaced by demands of reality.

Panganiban, no surprise, is the personification of vulnerability and grief, tempered by De Guzman’s believability as the stable, supportive one. De Guzman, what John Estrada and Piolo Pascual would probably look like if they were gene-spliced, gets to do much by being subtle. You’ll be a fan of both by film’s end, if you aren’t already, mid-movie.

For all its spotlight on dreary life and treacherous love, the film has redeeming optimism. It fits all that in one talky, painful catharsis of a movie, and for that, those who relate to it have much to be thankful for.

A decent, if at times predictable, sci fi/teen romp, “Project Almanac” asks and answers the question, “What if teenagers could change history?” 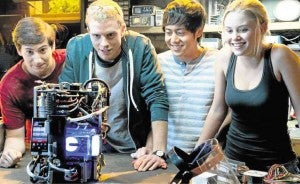 Just a few years ago, the scenario of teens acquiring powers, specifically telekinesis, was presented in “Chronicle.” Somewhat reminiscent of that movie, “Project Almanac” is about a group of friends that discovers blueprints of a time machine which they assemble, test and eventually upgrade. Soon enough, they are able to alter their shared history. They fail, however, to see the repercussions to the bigger picture.

The Dean Israelite film follows David (Jonny Weston), a high school genius who hopes to get a scholarship in a prestigious university. His loyal sister Christina (Virginia Gardner) regularly films his activities. They stumble upon an intriguing video of his seventh birthday, where he spots his current-day self in the background.

“Project Almanac” has its share of time travel references, among them “Doctor Who,” “Terminator,” “Time Cop” and “Looper.” Oddly, it praises “Looper,” which has baffling cause-and-effect scenarios—in which a future assassin tries to change his reality by drastically transforming the past of a parallel/entirely different timeline. Thankfully, “Almanac” doesn’t cop out by saying that time travel is too difficult or messy to explain.

It’s primarily about the consequences of changing history and, interestingly enough, the characters mulling over relatable desires. These teens want money, respect, revenge, acceptance, sex…and they have the power to have them, until they realize that altering the past doesn’t always lead to feel-good, happy consequences.

Unnecessarily shot in the “found footage” style, you’d expect it to end horribly—“Blair Witch Project,” “Cloverfield” “Paranormal Activity” and the aforementioned “Chronicle” wielded that sense of foreboding adeptly. Here, it’s an excuse to make the camera work look amateurish and “real,” but it’s just dizzying and quite tiresome, and it isn’t necessarily “found,” just nonstop documentation.

“Project Almanac” is flashy (Michael Bay is one of three producers), so it’s visually busy and quite loud. It can get too chaotic: Imagine unceasingly hyper, noisy, frantic teenagers—a testament to the young 20-, 30-something actors’ talents—for an hour and a half, and you pretty much heave a sigh of relief right after.

Read Next
‘T-Bird at Ako’ in UP Diliman
EDITORS' PICK
Notice of 2020 regular meeting of stockholders June 18, 2020
SM prepares for ‘safe malling’
Duterte expected to make announcements on quarantine measures Thursday
Public school enrollment to proceed on June 1 – Palace
Leveling up your ‘lutong bahay’ with the kitchen companion you never knew you needed
Año: IATF recommends GCQ for Metro Manila with localized lockdowns on June 1
MOST READ
Metro Manila mayors told: Keeping bus, jeepney ban ‘catastrophic’
Revillame tells Roque: ABS-CBN is in my heart despite being in rival network
Jeepneys banned, buses allowed to operate at 50% capacity in GCQ areas — IATF
DepEd: No need to buy gadgets for alternative learning
Don't miss out on the latest news and information.