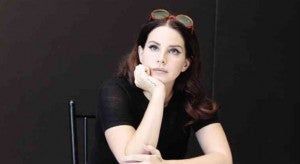 ON RELATIONSHIPS, she confesses, “I’m usually the one who’s not to be trusted because I’m never quite sure.” Ruben V. Nepales

LOS ANGELES—“I was very wild,” admitted Lana Del Rey, who recalled her troubled past in our interview. The singer-songwriter suffered from alcoholism at a young age. “I went to a boarding school (Kent School in Connecticut), which was unusual because I’m from Lake Placid (New York).” She was only 15; her parents sent her to Kent hoping she would get sober.

“We didn’t know anyone who ever went to boarding school,” recounted Lana, a striking beauty in a black top and skirt, sunglasses perched on her head.

She had told GQ about her alcohol addiction: “I was a big drinker at the time. I would drink every day. I would drink alone. I thought the whole concept was so f—ing cool. A great deal of what I wrote on ‘Born to Die’ is about these wilderness years. My parents were worried, I was worried. I knew it was a problem when I liked it more than I liked doing anything else. At first it’s fine…you think you have a dark side—it’s exciting—and then you realize the dark side wins every time you decide to indulge in it. It was the worst thing that ever happened to me.”

Even then, Lana felt her artistic drive. “In my heart of hearts, I really wanted to be creative. I was really looking for direction and validation, for someone to say it doesn’t have to be business; you could do something where your entire life will end up being an extension of your profession.”

Lana, who is of Scottish descent, said she wrote her first song at 11 years old. “It was called ‘China Palace.’ It was about being a princess.”

She always hoped she had talent, said Lana, who was raised a Catholic. “I was the cantor in my church choir. I was an angel in Christmas pageants. I just really liked to sing.”

The New York native, whose real name is Elizabeth Woolridge Grant (her former stage name was Lizzy Grant), added, “Even at a young age, I really wanted to have a career. I didn’t know if I could. That frustration was part of what led me down that path. I do have inspirational people in my life—people I met along the way who aren’t really well-known.”

She made special mention of one such individual, Jane Powers. “She’s a real estate agent. I met her seven years ago in New York and I loved her. I really wanted to be a singer. I would say, ‘I don’t know what’s going to happen.’ She’d say, ‘God didn’t save you from drowning just to beat you up on the shore. All you really need is patience when you have persistence.’ She’s just an angel.”

She cited her father, Robert England Grant Jr.: “He’s another wonderful person. I have a lot of creative inspirations. I love (Federico) Fellini. There’s a documentary about him, ‘I’m a Born Liar,’ that was really interesting.”

Bob Dylan inspired her, she said, in “the way he kind of created his own history and which allowed him to create his own future. I moved to the West Village (New York) because I loved this era in the 1960s when they were creating a new world.”

Lana loves the ’50s and ’60s so much that she described herself as “gangsta Nancy Sinatra.”

On her relationships which have included a record label executive and musicians, Lana confessed, “I’m usually the one who’s not to be trusted because I’m never quite sure. They say when you know, you know. I’ve never known. When you continue in things even though you don’t know, that doesn’t exactly make you trustworthy. I’ve had disappointments in relationships that I was really hopeful about, but never because the person was dishonest—maybe not entirely himself yet.

“I was lucky to be in a relationship for a long time where so many coincidences happened within the relationship, almost like finishing somebody’s sentences. I’ve been lucky to be, without sounding loopy, almost psychically connected on another level with someone. It really set that relationship apart from others that felt good but maybe, I realized, weren’t as meaningful in my big, karmic picture of life.

“Unfortunately, he hadn’t been feeling well for four years. Eventually, I decided to move on and try something new. I’m traditional, I guess, looking for something that makes everything even more beautiful than it already is.”

Is she in love now? “Maybe,” she replied with a smile. Lana is reportedly dating Francesco Carrozzini, an Italian fashion photographer.

As for her music career (her third album, “Ultraviolence,” debuted on top of Billboard 200 last year), Lana said, “I feel that the three records were so heavy and autobiographical. It’s been so cathartic. I like to use my previous work as a jump-off point to do something new.

“I’m ready to go into more of a ‘Lucy in the Sky With Diamonds’ surrealist place. That’s why I really do like what I heard about Fellini and all of the movies that were overdubbed and the actors were counting and not saying lines. I couldn’t believe that.” 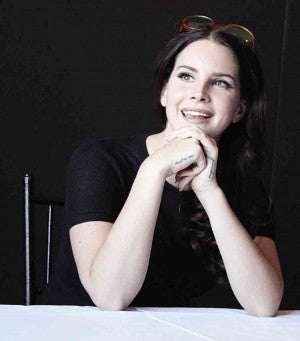 SINGER prefers to be in love when she is writing. photos by Ruben V. Nepales

The singer-composer, whose “Big Eyes” from the movie of the same title earned a best song nod in the recent Golden Globes, exulted the power of words.

“I’m one of those people who believe that words are some of the last forms of magic that exist,” said Lana, who earned her first Grammy nominations last year. “If you can alter people’s feelings through rhymes, couplets and melodies, it’s really a fun job to have. I find myself sometimes going back and forth between writing autobiographically and living vicariously through my own lyrics.

“It’s a form of escapism for me in some ways, now that I don’t go out much. So, definitely, if you’re lucky enough to do what you love, it can be your whole life. I’m very lucky.”

She described her songwriting process: “I like to write at night. I lived in New York for 10 years. I never thought I’d move to the West Coast. Now that I’m in California, I find that I actually love writing when it’s really hot. So I like summertime; I’m a sun chaser. Everything is summertime. I’ve been banned from incorporating that word.

Love and the tropics

“I like to be in love when I’m writing. I like anything tropical and exotic, anything Tahitian, Hawaiian.”

Lana took it hard when her early work was panned. “I’ve been sad for different reasons. I have my own personal reasons. I was disappointed when I was criticized early on for those records that I was attached to because I considered myself a writer. Maybe the way I looked got in the way. That was disappointing for a few years.

“New York was my big inspiration. And then being on TV in New York and feeling like it didn’t really go that well (her ‘Saturday Night Live’ performance of two songs that was criticized)…and moving to the West Coast and reorienting everything. It was a lot to change.”

Asked how she is now, Lana, 29 and about to embark on a concert tour this year with Courtney Love, answered, “The first thing I need is to be happy, which can be difficult when you tour for seven months out of the year.”