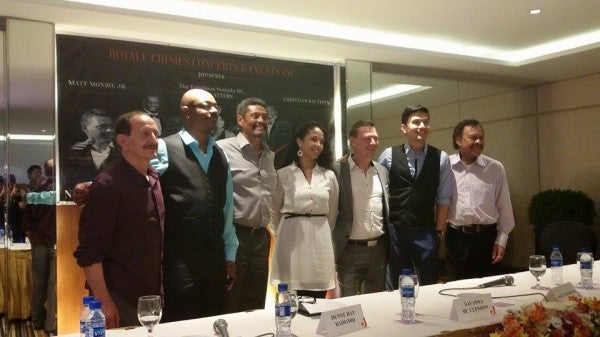 The Platters, Matt Monro Jr., and Christian Bautista during the “Only You” Valentine’s Day concert press conference.

MANILA, Philippines—Timeless music icons The Platters and Matt Monro Jr. will be serenading Manila in a two-night concert dubbed “Only You” this weekend. The shows slated Feb. 14 and Feb. 16 will happen at the Philippine International Convention Center (PICC) Plenary Hall and at the Resorts World Manila Newport Performing Arts Theater respectively. The country’s very own balladeer, Christian Bautista, will be sharing the stage with the hit makers in these nights.

Asked how he feels to be performing with iconic artists such as The Platters and Matt Monro Jr., Bautista said in a press conference held on Thursday that he was “a bit nervous but pretty excited” to be with his idols. But more importantly, “…there’s going to be magic on stage for sure, so watch out for that,” the balladeer added.

Valentine’s Day in the Philippines

For Matt Monro Jr., to be performing a Valentine’s Day show for the Filipino people is “very, very special” for him because he has always admired “the culture and the love” that our country has.

Meanwhile, The Platters lead singer Donne Ray Radford said he has known about the Philippines for a long time as he grew up having close relationships with friends who are “mixed” (Filipino-American), reason why he has always wanted to come over.

What’s an ideal Valentine’s date for Matt Monro Jr.? “Definitely being with my girlfriend, that’s one,” Monro said, but “…to share what I have in my heart with you guys means so, so much to me,” he added, pertaining to “Only You.”

Asked to share a love advice with Filipinos who listen to The Platters songs whenever in love and otherwise, “Well they have to listen to the words. Go back and listen to the words of The Platters music and it tells you the advices there. What we believe is in commitment, trust, love, and mutual respect; and the most important thing, friendship and have fun,” Radford said.

Meanwhile, Christian Bautista—who openly admitted that he is single at the moment—was a ray of light for the “broken-hearted” when he said “…we sing the songs that they can connect with so that they can remember the good times and still somehow move on. But later on, we’re also here to sing love songs of hope [as well] so that yes, this is a hard time, you just got to go through it, everyone has, but we move on and we discover a new kind of love, maybe even greater than the past love.”

The “Only You” concert was organized by Royal Chimes Concerts & Events. Tickets to the show are available at ticketworld.com.ph.