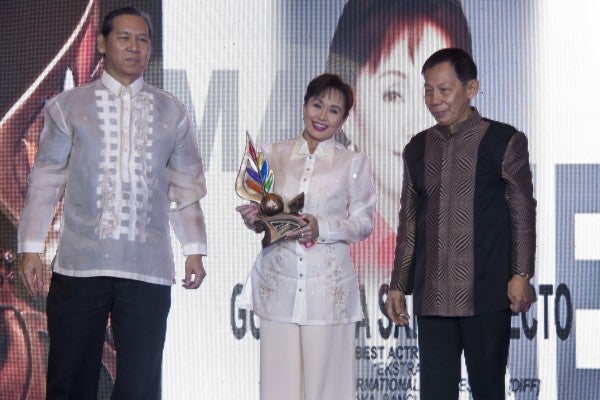 Batangas Governor and multi-awarded actress Vilma Santos led several artists from various disciplines in this year’s Ani ng Dangal awards given by the National Commission for Culture and the Arts (NCCA) in ceremonies at the National Museum of the Philippines on Feb. 12.

The Ani ng Dangal is given to Filipino artists who have won international awards the previous year.

Santos got the  special award for winning best actresss in the 2014 Dhaka International Film Festival in Bangladesh for the critically acclaimed and commercially successful 2013 Cinemamalaya movie, “Ekstra,” in which she deglamorized herself to play a movie and television bit player.

Santos, widely considered the most lastingly successful Filipino movie and television actor of all time, made the acceptance remarks on behalf of the other awardees, many of whom came like her from the media arts as well.

ADVERTISEMENT
Read Next
Piolo Pascual ‘doesn’t have a problem’ with KC Concepcion bonding with his aide
EDITORS' PICK
What’s happening to the ICT Industry and its role in helping businesses today
Water remains our saving grace right now
ABS-CBN chairman Gabby Lopez resigns from network, other Lopez-owned firms
AFP chief asks Facebook to bring back pages of ‘advocacy groups’
Siomai King Express debuts with mouth-watering seasonal products
US Congress bill seeks to halt assistance to PH police, military
MOST READ
ABS-CBN chairman Gabby Lopez resigns from network, other Lopez-owned firms
Pogo exodus seen to empty more than a tenth of Metro Manila offices, condo units
He’s a Herro: Heat top Celtics, move a game from NBA Finals
Suspension of US security aid to PH ‘not only our loss but theirs as well’ — Lacson
Don't miss out on the latest news and information.