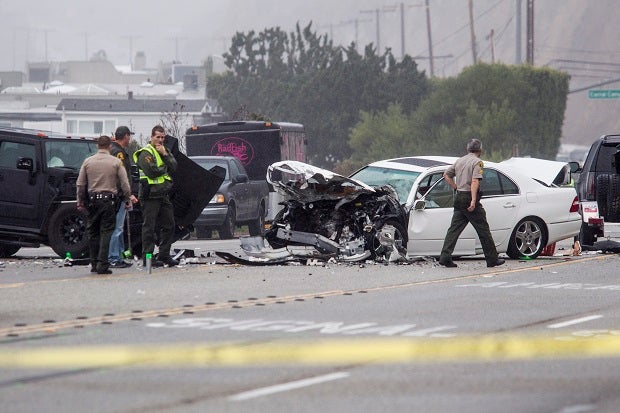 LOS ANGELES, United States – The step father of celebrity Kim Kardashian, olympian Bruce Jenner, was involved in a car crash Saturday in which he appeared unscathed while one woman was killed and several more people were hurt, TMZ reported.

The deadly accident took place on the Pacific Coast Highway in the Los Angeles metro area, while Jenner was being chased by paparazzi, according to the gossip news website.

It added that eight people were injured.

Jenner, pictured at the scene standing upright with no obvious injury, was being trailed by at least five paparazzi when he collided with a white car that then swerved into oncoming traffic, TMZ reported.

The white car’s driver was killed.

Jenner, 65, has Americans’ rapt attention amid talk that he is soon to come out as transgender.

People magazine, a trusted conduit for Hollywood publicists, has reported that the motivational speaker turned reality TV star would open up in a forthcoming interview with ABC News.

Jenner became an American sports hero when he set a world record with his Montreal decathlon victory.

But it was through his marriage to the former Kris Kardashian that he once again became a household name in the reality TV series “Keeping Up with the Kardashians,” in which he appeared as the sometimes bemused stepfather of her flamboyant daughters Kourtney, Kim and Khloe, and their younger girls Kendall and Kylie.