On point of unified effectivity and achievement, the new show wasn’t really all that great—but, what made it exceptional was its “casting coup” of getting three Padilla siblings, Robin, Rommel and BB Gandanghari, to costar in the new production.

BB hasn’t been seen all that much onscreen, so her feistily enthusiastic participation in this show is its most attention-calling gambit. Like her or lump her, some viewers will at least be tempted to sample the show, just to see if her gender-bending moves are worth all the fuss and bother. 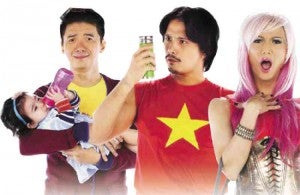 The good news is that despite some cliché antics and an occasionally less than secure “woman’s” voice, BB’s portrayal in her first sitcom makes for good, idiosyncratic viewing.

Yes, her female impersonation occasionally comes off as dated but they’re also droll and diverting, and provide the show with its unique “color” and “flavor.”

The challenge for the sitcom now is to keep the fun and games going after the initial “golpe de gulat” appeal of BB’s gender-bending characterization shall have ebbed.

Perhaps this is where BB’s siblings can step into the breach and help “carry” the show. Thus far, all Robin has done is his usual, gung-ho shtick—coming on like a house on fire, as macho as macho can be.

Will the time come when his character will also relax and “soften up?” Now, that would be different!

As for Rommel, his projection is less tough and more “playboy-playful” than Robin’s but he could up his “fun” performance ante, as well.

It really all depends on how cleverly the show’s scriptwriters can think up new possibilities for its three stars, so they won’t be limited by their signature screen personas.

At the moment, BB is the sitcom’s most persuasive argument for being viewed, but Robin and Rommel, if properly scripted and showcased, can make the show more viewable by developing their own characters more fully.

They may not have as radical a transformation to make as BB, but they shouldn’t get stuck in their respective tough-guy and playboy ruts.

Finally, one of the best things about “2 1/2 Daddies” is the proof that it so winningly offers that the Padilla siblings have gotten over their initial hesitation and finally embraced their new “sister” BB.

It’s quite amazing that these stellar brothers known for their hyper-macho orientation have been able to take this radical step.

It will go a long way in persuading other families with “gender” issues to also look beyond the initial impediments, and remind themselves that the person hasn’t changed, and should still be understood, embraced—and loved.

It’s impressive to see all this happening on mainstream TV, which isn’t exactly famous for going against the grain, and challenging safe and predictable attitudes and points of view. The fact that the Padillas and their new sitcom have accomplished so much so soon, in our view, spells a bright start for the new TV year!