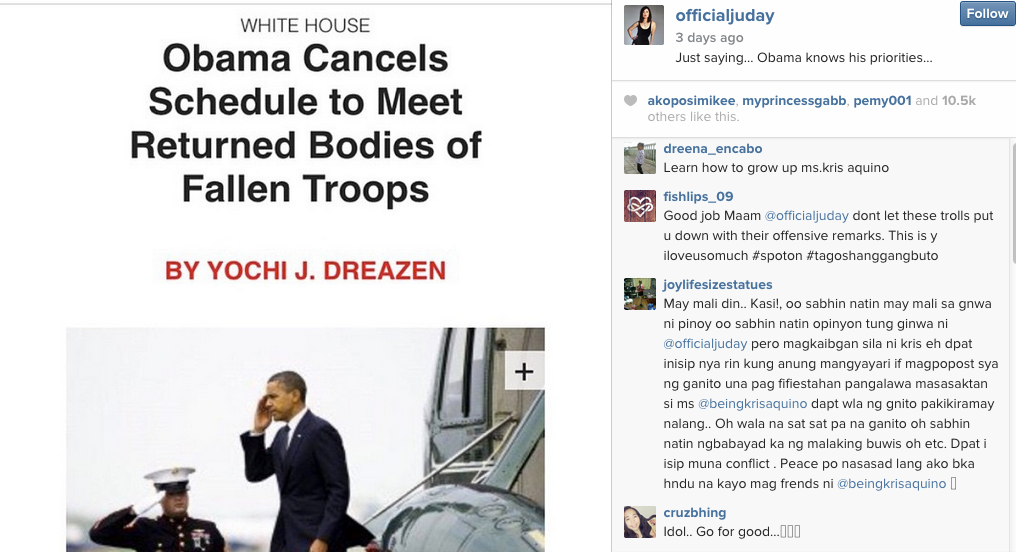 MANILA, Philippines — Actress Kris Aquino has unfollowed “friends” on social media in support of her brother, President Benigno Aquino III, who has received flak for not attending the arrival honors for 42 members of the Special Action Force (SAF) killed in Mamasapano, Maguindanao

Could Judy Ann Santos be one of those that Kris unfollowed?

On Friday, Judy Ann posted on her Instagram a screengrab of a National Journal article titled “Obama Cancels Schedule to Meet Returned Bodies of Fallen Troops.” The article was about US President Barack Obama canceling a trip to honor troops killed in Afghanistan in 2011.

She captioned the screengrab with “Just saying … Obama knows his priorities…” a reference to President Aquino who chose to attend the inauguration of a car plant in Laguna instead of meeting the bodies of the lawmen at the Villamor Air Base in Pasay City on January 29.

Judy Ann defended her post to bashers saying she also had the right to express her views on the issues.

“Dear @ellahdecastro.. I respect your opinion.. Lahat tayo may karapatang magbigay ng sarili nating opinion at saloobin sa mga bagay na gobyerno ang involved (We all have the right to express our opinion and feelings about matters involving government),” responded Judy Ann to the Instragram user who called her “epal” (slang for interloper) for posting Obama’s picture

Judy Ann added: “You might want to check other ig accounts of other public figures as well… we all share the same sentiments…”

On her own Instagram, Kris admitted being hurt by the comments of some of her friends when she apologized to singer-couple Ogie Alcasid and Regine Velasquez for misinterpreting their posts.

She also hinted at unfollowing friends for “defending people I love.”

User @yanplatino asked Kris: “So why did you unfollow some of your friends? Did they threatened (sic) your brother’s life? Nasaktan ba nila ang feelings mo? (Did they hurt your feelings?) Na-offend ka ba? (Were you offended?) ”

She added, “Truth, I have friends who privately spoke to me about how they wished the president had done things differently, the word there is private & w respect. We listened to each other, we may not agree but at least we listened.”

And in instances that she got hurt, she simply quit reading their posts.