Kris Aquino condoles with kin of slain SAF men: ‘I know what they’re going through’ 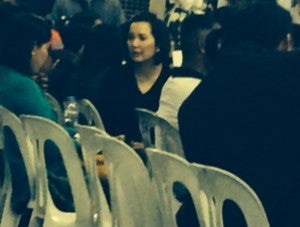 MANILA, Philippines—Amid the uproar caused by the absence of President Benigno Aquino III during the arrival rites for the slain Special Action Force (SAF) members at the Villamor Airbase on Thursday, his sister Kris Aquino went ahead to visit their wake and sympathize with their families.

The TV host-actress visited the wake of the fallen men at Camp Bagong Diwa in Taguig City before dawn Friday. She said she asked for Aquino’s permission if she could visit the victims and their kin.

(I asked for my brother’s permission if I could come here because I know what they are going through. I experienced the same. I lost a loved one in a violent manner and I just want to extend to them my sympathy and prayers.)

Aquino’s father, the late Senator Benigno “Ninoy” Aquino Jr., was gunned down at the tarmac of the former Manila International Airport upon his return to the Philippines from exile in the United States on Aug. 21, 1983.

Kris was not the only relative of Aquino to visit the SAF members’ wake ahead of the President’s appearance at their necrological services Friday morning.

His aunt, former politician and socialite Tingting Cojuangco also paid her respects for the victims.

The President has gotten flak for attending the plant inauguration of a well-known automotive company instead of welcoming the bodies of 42 of the 44 SAF members. The hashtag “Nasaan Ang Pangulo” even became a top local trending topic on Twitter as netizens questioned Aquino’s priorities.

His spokesmen, however, maintained that he did not snub the ceremony, citing that his itinerary for Thursday did not include attending the arrival rites. IDL