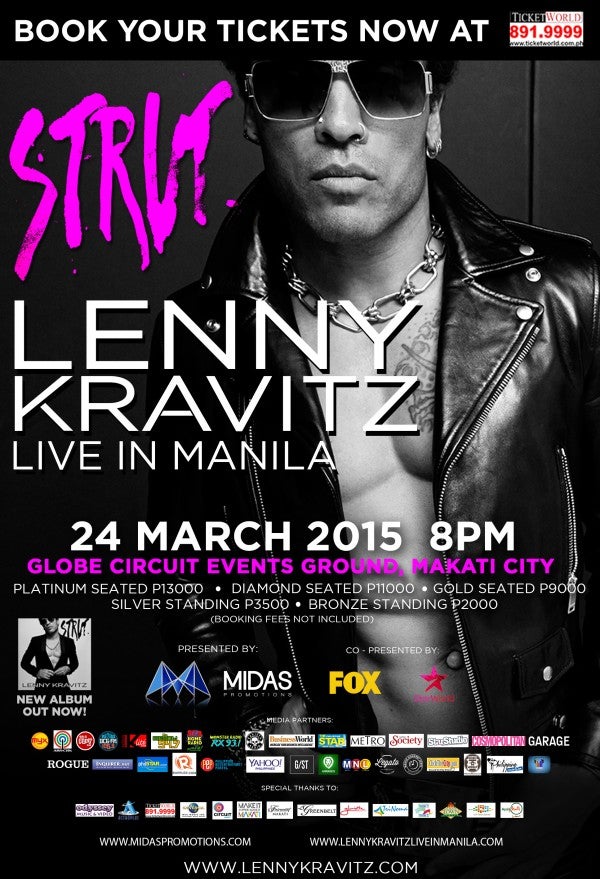 MANILA, Philippines–Lenny Kravitz, one of the most distinctive and successful recording artists of the past quarter century, is about to set foot in Manila for an amazing concert. MIDAS Promotions, the company responsible for sold-out concerts in the Philippines and the rest of Asia, is proud to present Lenny Kravitz Strut Tour LIVE in Manila this Mar. 24, 2015 at the Globe Circuit Events Ground in Makati.

Just what are the reasons why one shouldn’t miss this awe-inspiring musical extravaganza?

In 2014, Kravitz debuted his 10th studio album, Strut. Kravitz is currently on an extensive world tour, and has chosen Manila as one of its stops. He will be performing songs from Strut as well as from a distinguished career that has made him one of the most admired recording artists of today.

It’s going to be a great loss to miss seeing this living legend perform. Buy your tickets now!

Tickets are on sale at www.ticketworld.com.ph or at any Ticket World Outlets. For inquiries, call 891-9999. Ticket prices are as follows: