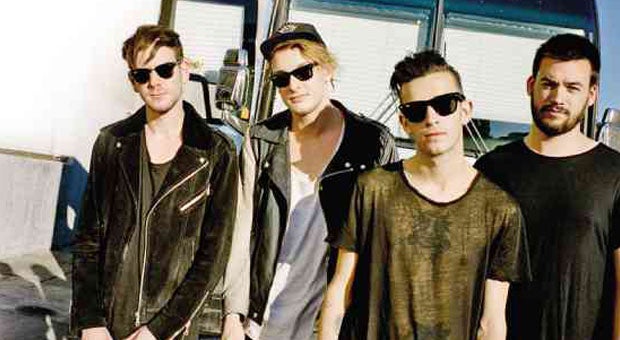 The 1975’s music video for the band’s sprightly hit, “Girls,” starts with frontman Matt Healy sarcastically saying, “Everything feels totally wrong. We’re not a pop band… This whole scenario is not what we’re about… It needs to be black-and-white for a start.”

It was obviously just about Healy—who loves pop music, by the way—making fun of the melancholic and monochromatic aesthetic of their past videos. But the remark sparked a debate on YouTube about the British band’s genre.

Is it pop, alternative, indie-rock? For the 25-year-old musician, labels shouldn’t matter.

The Manchester-based group—with Adam Hann (guitar), George Daniel (drums) and Ross MacDonald (bass—enjoyed breakthrough success in 2013 with a string of hits including “Chocolate” and “Sex.”

The band is part of the wave of British acts performing in Manila this year. It takes the stage Saturday, Jan. 24, at the SM Mall of Asia Arena in a show mounted by MMI Live, Viva Live and Ovation Productions. (Call SM Ticket, tel. 470- 2222).

Excerpts from out interview with Healy:

A good song is a good song. That’s all I ever wanted to do—write good songs. Everything else is superficial. If a song is coming from a particular place, is genuine and is a form of creative expression, then it doesn’t matter what genre it is.

What have you been listening to lately?

Who are your influences?

A lot of [film] soundtracks shaped our band. We didn’t aspire to sound like a band, but a soundtrack. I love “Pretty in Pink,” other 1980s movies, and teen flicks like “American Pie.”

But of course there are Michael Jackson, Prince and bands like The Sundays and The Blue Nile.

What do you make of your success?

There’s a bit of pressure… I try to continue writing songs about what’s happening to me, about what’s truthful. I try not to think whether people will like it.

You and your band mates have been friends for ages.

Yes, that means … the creative process is clear and clean. There are no arguments… We can rely on each other’s talents.

When will you release a new album and will it be different from your first?

We’ve been writing songs, but will probably start recording in April till October. It will be different, but we’ll just have to wait and see.

You were in Manila last year for a mall tour. What was that like?

I love Manila… it was intense. Lots of crazy kids there.

Are you still surprised to see you have fans on this side of the world?

Yes, of course. Traveling to different places, seeing so many people—anyone who’s in a band will tell you that it opens up your mind.