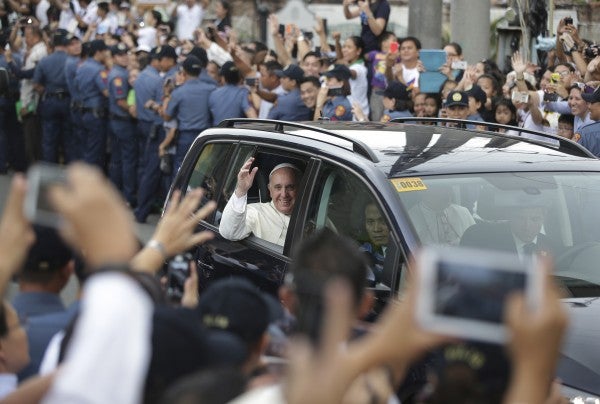 Pope Francis waves to Filipinos in Manila on Friday. AP

MANILA, Philippines—Even stars are awed by the presence of the biggest celebrity to land on our shores.

The Pope disembarked 5:58 p.m. on Thursday from a chartered SriLankan Airlines plane to much cheers and adulation from the faithful who greeted him upon arrival at Villamor Airbase all the way to the motorcade to his residence at Apostolic Nunciature.

Government officials, celebrities and other prominent personalities coming in close contact with the Pontiff are expected to share on social media their experiences during the Church leader’s five-day state and pastoral visit.

Actress and TV host Kris Aquino, sister of President Benigno Aquino III, was one of the stars present at Malacañang Palace during the Pope’s courtesy call on Friday.

In an Instagram post on Thursday, Kris said she and cohost Boy Abunda taped their talk show at an earlier time “because Boy and I are super blessed to get to see Pope Francis in Malacañang,” adding they are expected to be at the Palace at 7 a.m. on Friday.

No selfies so far, but Kris on Friday updated her Instagram account with a photo of herself sharing a light moment with the Pope: “It was just so thrilling to see the Pope smile so warmly when I held up the rosary that my sons and I treasure.”

The Philippine National Police earlier discouraged its ranks from taking a selfie with the Pope, saying they were there to secure the visiting head of the Church and the people and not to take pictures and brag about their involvement in the activity.

The Pope arrived at the Palace at 9:21 a.m. on Friday for a closed-door meeting with the President and to give his first speech to the Filipino people.

He then proceeded to Manila Cathedral to celebrate Mass at 11:15 a.m.

The Pontiff then met with families at Mall of Asia Arena in Pasay City on Friday afternoon. 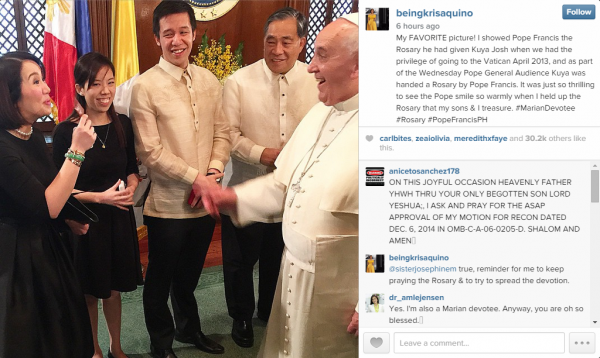 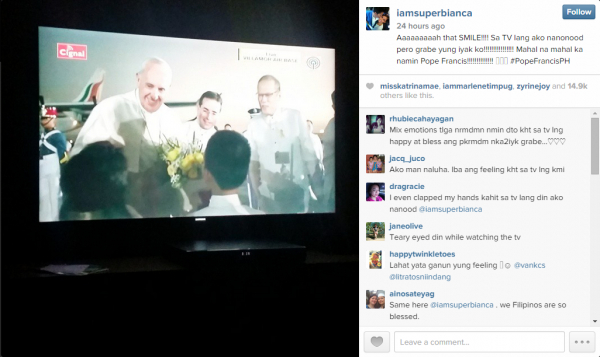 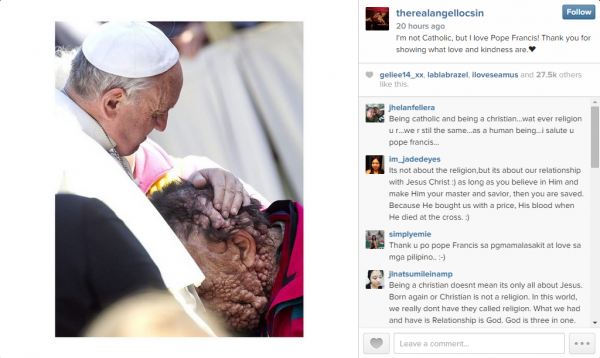 Non-Catholic Angel Locsin showed her love and appreciation for the Pontiff. 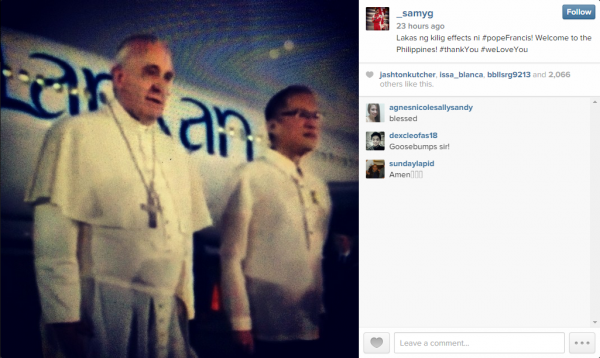 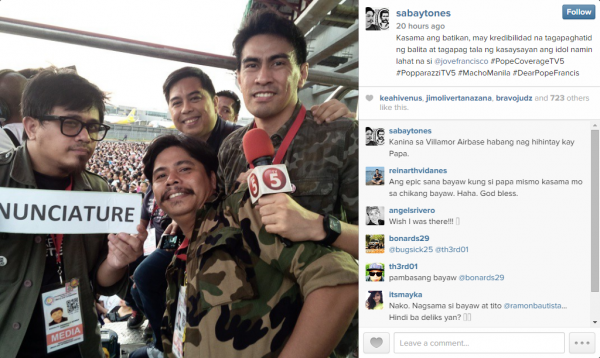 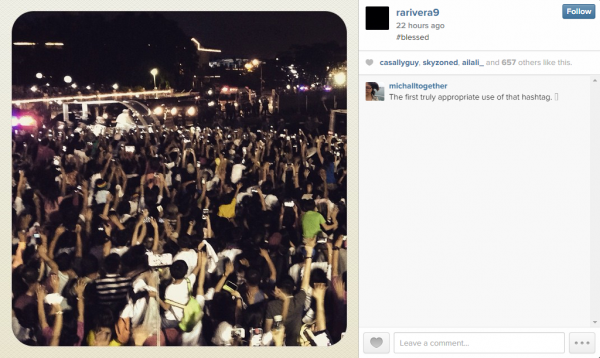 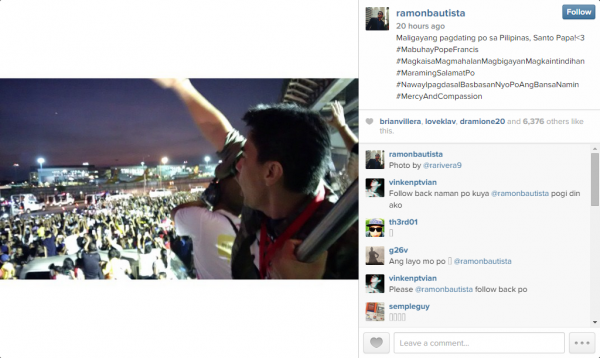 Jun Sabayton, RA Rivera and Ramon Bautista honored the Pope during their coverage of his arrival. 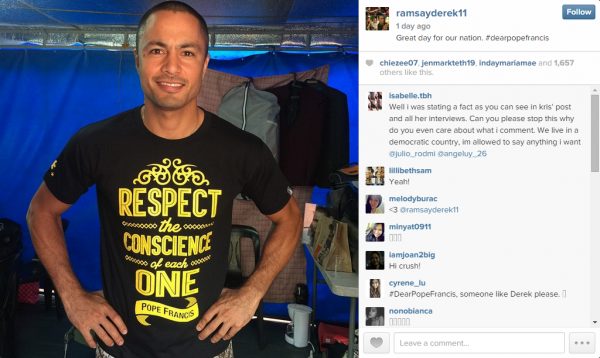 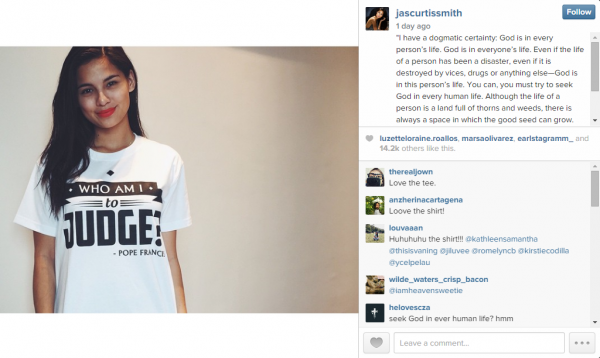 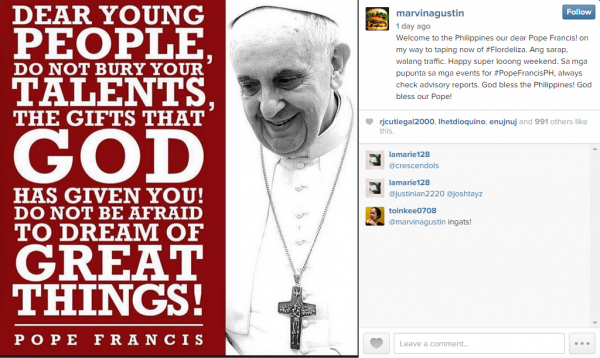 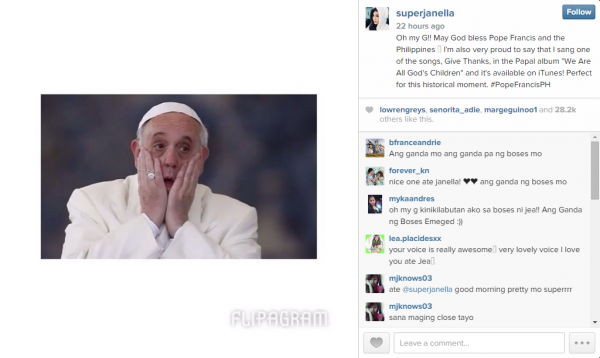