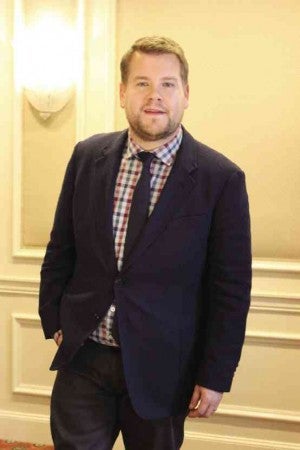 LOS ANGELES—From the Baker in “Into the Woods” to the new host of “The Late Late Show”—this will be quite a year for James Corden, who takes over hosting duties from Craig Ferguson on the CBS nightly series.

James, who got good notices for his performance as Emily Blunt’s husband in “Into the Woods,” joked in an interview that he has to get in shape in preparation for his new nightshift job in March. Blessed with self-deprecating British wit, James was a hoot of an interviewee.

A Tony Award winner for “One Man, Two Guvnors,” the London native is an acclaimed comedy writer, as well. James started 2015 on a high note—he was appointed Officer of the British Empire in the UK’s New Year Honors for services to drama.

“My New Year’s resolution is to work out more,” James shared. “Someone said to me that his bad health habit was eating between meals. I didn’t even know that this was a bad thing.

“I am going to host this show and be on television every night. I have to try to work out—that’s my plan. It’s difficult—my wife (Julia Carey) was pregnant. She was consuming chocolate at such a rate that it was very difficult to be around her in our house.”

Julia gave birth to a girl last November, an addition to the Cordens who have a 3-year-old son, Max (more about him and his interesting connection to Paul McCartney later).

On his plunge into the highly competitive late-night talk-show arena, James quipped, “I think it’s going to be a disaster. I’m mystified that I would be picked. I’ve never done anything like this. I consider myself an actor. I didn’t lobby for the job. There’s a wonderful man called Les Moonves and Nina Tassler (both top CBS executives) whom I adore. They were asking me to write a sitcom for CBS. In the end, I signed a deal with HBO.

“Then, Les called me and said, ‘Look, how do you fancy doing this show?’ I thought, well, who am I to say no? I would much rather regret doing something than not doing something.”

James said that his would-be rivals have been gracious. He shared, “Ever since the announcement of the job, Jimmy Fallon, Stephen Colbert and Seth Meyers have gotten in touch, reached out and said, ‘If there’s anything you need or want, I am here,’ which is thrilling! So, I am going to try my best—and then it will probably get canceled.

“To show you how much I think it’s going to be canceled, my wife said, ‘Should we buy (a house) somewhere in Los Angeles?’ I went, ‘Absolutely not. We are getting something on a month-by-month lease, because there’s a very strong chance that, when this show is canceled, we will be marched to the airport and told to never come back.’”

The actor-writer revealed who attended an after-school performance arts school with him—Eddie Redmayne and Aaron Johnson. “Eddie was the very handsome choir boy who would sing like, ‘Walking in the Air’ at Christmas. I would always do the funny songs, like ‘Sit Down, You’re Rockin’ the Boat.’ Aaron would always do big tap dancing numbers which, I am sure, you can’t imagine, now that he’s a huge stud action hero.”

On his comedy-writing career, James explained how it began. He has won many awards, including a Writer’s Guild of Great Britain for Comedy Writer of the Year prize. “I started writing when I was in ‘The History Boys,’ because I wanted a greater sense of control over my career,” he recounted.

“Endless film scripts were coming in. But, the parts they would want me to audition for was like the man who dropped off a television to Hugh Grant, had three lines and then left. So, I thought, if they aren’t going to (offer lead roles), I’m going to have to muscle my way onto that table. That’s when I started writing. I sent a script to the BBC. They said, ‘We love this, and we would like to commit to a series.’ That really changed my career!”

James actively supports Comic Relief, a major charity based in the UK that raises funds to help poor and disadvantaged people around the world. James does sketches with talents that folks can download in exchange for a donation. James recalled an over-the-top pitch he made to Paul McCartney so the music legend would agree to appear in a sketch with him.

James recalled the former Beatle’s reaction: “Sir Paul went, ‘Bloody hell, James. I have heard some pitches in my time, but this is a bit thick’ (laughs). I said, ‘This is nothing. If you had said no, I was going to name my unborn child after you, to try and convince you to do it. He said, ‘Deal. If you name your child after me, I will do your sketch.’ He was joking. We shot the sketch. It was ridiculous how huge it went!

“Two months later, our son was born. We christened him Max McCartney Corden. I took a picture of the birth certificate and texted it to Sir Paul. He couldn’t believe it. Two days later, the most beautiful cashmere blanket arrived. It was embroidered with, ‘Dearest Max, from one McCartney to another. All my love, Uncle Paul.’

James’ next goal—to get Paul to guest on “The Late Late Show.” “I don’t know how I am going to get him on the show,” James said. He joked, “I am going to name my daughter Paul or something—but, we will see!”