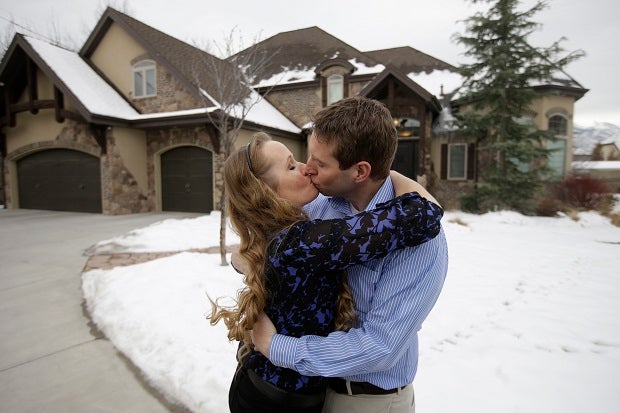 Jeff Bennion and his wife Tanya kiss in front of their home, Monday, Jan. 5, 2015, near Salt Lake City. Two Utah men set to appear in the reality TV show My Husbands Not Gay, say theyre fulfilled in their relationships to their wives even though theyre attracted to other men. The shows concept has come under fire since it was announced by the TLC network last month. AP

SALT LAKE CITY — Preston “Pret” Dahlgren has led what might seem like a picture-perfect Mormon life: He met his future bride in Sunday religious classes as a teenager, completed his mission and married her. He is active in the church and the proud father of two young daughters.

Dahlgren also is attracted to men.

His story is the subject of a new TV show called “My Husband’s Not Gay,” which gay-rights advocacy groups are calling irresponsible and dangerous. They want the TLC cable network to pull the plug on the program before it airs Sunday.

Dahlgren and another Mormon man from Utah featured in the show say they’re happy in their marriages, and they hope the program gives stories like theirs a foothold in the conversation about sexuality.

Dahlgren, 32, said he’s known he was attracted to men since he was about 12 years old, but he also always wanted the kind of family he grew up in: a father, mother and children.

The gay rights group GLAAD, however, says the show sends the wrong message and is a sad reminder of so-called gay conversion therapy, often faith-based efforts designed to change sexual orientation that can be emotionally scarring.

“No one can change who they love, and, more importantly, no one should have to,” GLAAD president Sarah Kate Ellis said in a statement. “By investing in this dangerous programming, TLC is putting countless young LGBT people in harm’s way.”

The organization pointed to a change.org petition asking TLC to cancel the show that so far has gathered more than 80,000 signatures. Responding to GLAAD, the network says it will tell compelling stories about different ways of life, and the four men on the hour-long show speak only for themselves.

Jeff Bennion, 44, met his wife, Tanya, more than 13 years ago after he had dated men. He told her he was attracted to men after they’d been dating for about a year and a half.

“I was devastated because I didn’t know what that meant for me,” said Tanya Bennion, 42. She worried that he’d cheat on her with a friend but said the couple’s strong connection helped her work through her questions.

Megan Dahlgren says her marriage remains strong, including the physical aspects of their relationship. “We do have a happy, healthy sex life,” she said.

Dahlgren and Bennion both said their upbringing in The Church of Jesus Christ of Latter-day Saints was a big part of why they wanted to remain in a husband-and-wife relationship.

“I would say it was part of my decision early on, especially, and a big influencer of that,” Dahlgren said. “It certainly helped guide me toward where I’m at today, no doubt about it.”

“While the church does not promote marriage as a treatment method for same-sex attraction, couples who are trying to be lovingly supportive of each other while being true to their religious convictions deserve our support and respect,” Hawkins said.

Jeff Bennion said he would be horrified if a parent told a gay child that they should be more like one of the men on the show.

“My Husband’s Not Gay” is not the only show about people from Utah in unusual marriages. TLC also airs the shows “Sister Wives” and “My Five Wives” about polygamous unions.