Most fascinating interviews of 2014 (part 2)

LOS ANGELES—Eddie Redmayne, Brad Pitt, Alejandro G. Iñarritu, Jim Carrey and Robert Kirkman are some of the personalities who kept us engaged in our interviews with them in 2014. These talents mercifully didn’t make us look at our watch, stare at the ceiling, look at the window and wish we were out there instead of in a room. 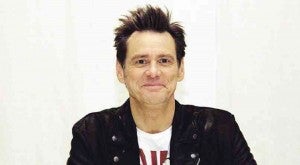 Conversations with the comedian over the years are not going dumb and dumber; he’s always surprisingly profound.

Jim on painting and sculpting, which he dabbles in: “I’m a firm believer in affirmation—that you’re already in the place you want to be. Don’t think about how much you are getting paid. It’s the same with my art right now. I am just painting and sculpting until I know [I have] something truly original to show.

“Everybody wants to make it real quick. They get a tiny bit of heat, get offered a reality show and sell themselves out.

The scariest Tweet that “The Walking Dead” creator got from a fan?

“I get scary tweets all the time. My weirdest fan interactions are tweets, because they say weird things to me sometimes. One guy said, ‘If you kill Daryl Dixon (a character in ‘The Walking Dead’), I’m going to burn down my entire apartment complex.’ Not necessarily threatening to me, but that’s a terrifying thought!

“I have to think that most of these people are joking, because Casper the Friendly Ghost is their icon. But, I do get a lot of like, ‘If you kill Carol (another character), I will kill you!’ It’s like a cavalcade of death threats every time I get on Twitter. I should probably take those seriously, but I am a big guy.”

Alejandro on “Birdman’s” central character, played by Michael Keaton, who hears his alter ego’s voice in his head: “I personally recognized myself in Riggan Thomson because my creative process has always been torturous for me. I’m a perfectionist. When you demand perfection from yourself, it’s a very difficult role to follow. The cost is high. That voice inside me is always telling me, how bad, stupid and mediocre I am. Or, how I could be doing better. There’s always that voice that tortures you.”

He recounted how hard it was to get “Birdman” off the ground: “It was absoultely difficult to get money for this film—it took me one year! Nobody believed in it. Why would they give money to a Mexican guy who only shows people suffering?” 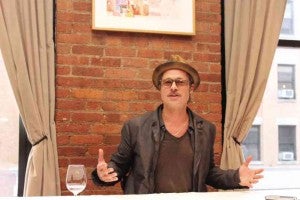 PITT. Directed by his wife in “By the Sea.” RUBEN V. NEPALES

The actor talked about being directed by his wife Angelina Jolie in “By the Sea,” which is set in the mid-1970s.

“She’s tough as nails, you know that,” Brad dished with a smile on his boss-director on the Malta set. “She wrote this beautiful, intimate, elegant European story about a couple dealing with grief. I am surprised what a challenging piece it is. I watch her set up the shots, and I am immensely proud. She knows what she’s doing; she’s good!”

As for dinners in the Jolie-Pitt household, Brad said, “We always try to have dinner together. It’s our time to talk about the day, and what everyone is feeling . . . Some dinners involve talking about why people die and what you want to get out of this life. Other dinners involve singing Jimmy Fallon’s ‘Balls in Your Mouth’ song. So, it can be anything!”

We asked if there was a singular point in his intense preparation to play Stephen Hawking when he finally thought he got it. “You never think you get it, particularly when you’re playing someone who is living, and you’ve met him, and you’ve watched every bit of footage,” said the young actor, who has already won an Olivier and a Tony.

“Because we couldn’t shoot chronologically, James (Marsh, director) allowed me to see the rushes each night, just to check if all the physical aspects were going OK. It was disappointing because [I am] used to seeing the real thing.”

He added, “Every single time, I would see what’s not right, but I suppose what I gleaned from my meeting with Stephen was this amazing optimism, energy, vibrancy and humor. I took that to the film.

“For all the things that were thrown his way, he still found humor. There were moments when I felt like I caught that!” (To be concluded tomorrow)