Garcia’s starrer could be a tough act to follow 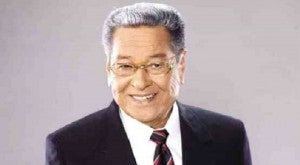 GARCIA. Topbilled moving tale about the importance of family above all else

ABS-CBN’S first “Christmaserye,” “The Gift Giver,” with Eddie Garcia, started off slowly, but effectively picked up pace and ended up as a moving tale about the importance of family above all else in our lives, both in and after the Yuletide season.

We hope that the same happy outcome will happen to the studio’s second “seasonal” series, “The Gift of Life,” topbilling Gerald Anderson and Maja Salvador.

In the new show, Gerald portrays a young man who has to undergo dialysis thrice a week due to injured kidneys. For her part, Maja plays a cash-strapped, street-smart girl who is forced by financial problems to sell one of her kidneys to Gerald—and then changes her mind before the organ transplant can be effected! —Not the best way to start and develop a loving relationship, right?

Still, since this is apparently a medical and romantic drama series, a happy ending must be in its telecasting stars—so, hope springs!

After several weeks of late-morning telecasting, the show’s plus points have emerged: They include its two stars’ obvious “chemistry” and its relatively realistic depiction of Gerald’s grave illness and Maja’s dire financial straits.

But, it soon becomes apparent that stellar “chemistry” isn’t enough to keep a series vital and involving. For that to happen, more attention should be paid to these other considerations:

After an edgy start, the series has become much too passive and talky, with one dialogue-oriented scene following another—until we wish that everyone would hush up for a spell and becomes more dynamic and active!

It would also be great if the stars’ away-bati relationship arc would take a less predictable turn. Yes, fans love the traditional alternation between squabbling and then kiss-and-make-up scenes— but, a less predictable approach would be more than welcome, for a change!

To balance the picture, we should express our appreciation for the series’ occasional use of realistic details, like Maja’s having to repair her only pair of shoes for an important meeting with Gerald’s parents.

These may be seemingly inconsequential details, but they’re significant to us, because they reveal that the people behind the camera are trying to keep things believable and real—unlike many other TV storytellers who keep playing the light fantastic and escapist, over and over again!

Most show biz denizens are all too easy to categorize, but a few unexpected and thus exciting or controversial exceptions to the rule have surfaced this season, thus inviting our special attention and scrutiny.

First off, viewers of the Italian edition of “The Voice” were thrown for a loop last year, when a young “singing nun” named Sr. Cristina Scuccia performed Alicia Keys’ “No One” during the tilt’s “blind” auditions.

Millions viewed the video of her stop-the-band performance—and Sr. Cristina went on to romp off with the competition’s top plum. She’s now a recording artist, and her debut album has been uploaded gazillion of times!

The formerly recondite nun now threatens to surpass the amazing success story of “Britain’s Got Talent” discovery, Susan Boyle. What about her religious vocation? —No contradiction there—music sings to and enhances the spirit, not just the hit parade.

Next on our list of unusual acts is the “color-blind” casting of the lead players in the new “Annie” film musical. The first movie was as W.A.S.P.-ish as you can get, with the lead roles of Annie and her super-wealthy adoptive dad essayed by European-American stars.

This time around, however, Annie is portrayed by black child (now adolescent) sensation, Quvenzhané Wallis, one of the youngest Oscar nominees ever. For good measure, her wealthy surrogate pater is another African-American star and Oscar awardee, Jamie Foxx!

The production isn’t making that big a deal about its “color-blind” casting ploy, because it really doesn’t have to—it’s sure to be talked about for weeks on end after the new film starts its theater run.

Fact is, “Annie’s” now black orientation is only the latest salvo in terms of “freer” casting that has been “exploded” in the entertainment world for some years now.

If memory serves, one of the earliest innovations was a black “Hamlet”—followed by a “Hamlet” staging in which the title character was portrayed— by a woman!

In addition, there are any number of “straight” plays in which the gender attribution has been reversed, like all-male versions of famous romances.

—No surprises there, actually, since even lolo William Shakespeare himself puckishly went in for role reversal in some of his plays!