BOCAUE, Bulacan—Fans of American rap singer Chris Brown, outraged over his canceled show at the Philippine Arena in Bulacan, sought immediate refund of tickets from the organizers on Wednesday night.

But as of posting, the organizers, through representatives from the Iglesia ni Cristo, the Arena owners, said they had yet to come up with a solution for the “unexpected” cancellation of the show.

Many fans who sought refund had bought VIP tickets worth around P3,000. 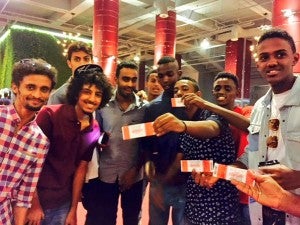 Brown was to be the main act in the “2015 Philippine Countdown” event at the Philippine Arena in Ciudad de Victoria in Bocaue, Bulacan. The event also features local artists including Bamboo, Sam Concepcion, Enrique Gil, KZ Tandingan and the Japanese girl group Tempura Kidz.

The countdown would include a pyromusical display promised to be the “brightest and most spectacular” in the country.

Sorbito gave his contact number to the complainants and signed their tickets to assure them that they could contact him once the organizers came up with options.

As Sorbito negotiated with the disappointed fans, security personnel of the Philippine Arena asked INQUIRER.net to stop taking videos of the incident.

But one of the fans, John Andrew Mon, insisted that he be interviewed so “their complaints would be heard.”

Mon said the organizers should have at least informed them that Brown would not be showing up.

Mon and his companions, Jasmin Maglaque and Michael Concepcion, who said they have been fans of the rap singer for years, took a cab from Makati City.

Maglaque said a video of Brown was shown after the performance of a local band.

“The video was dark. It’s as if the video was taped through a video call. He apologized to the fans saying he couldn’t make it to the Philippines because he left his passport,” Maglaque said.

“As soon as the performances started, we had a hunch that Chris Brown wouldn’t come. Hindi man lang siya binabanggit sa (His name wasn’t being mentioned in the) line-up,” she added.

“We bought our tickets just to watch Chris Brown. We wouldn’t spend that much if it weren’t for him,” Maglaque said.

Before INC representatives spoke to the fans, the group of Themo Khudhair, Osama Alsharfy and Saud Mohamed Ali, all from Yemen, went around the Philippine Arena looking for the organizers of the show to seek refund of their tickets, but failed to. Angered, they tore up their tickets and tossed them into the garbage bin.

While many of the Yemenis and Africans who came for the Brown concert are studying in the Philippines, some flew into the Philippines just for the concert.

One of them, in utter disgust, flashed the dirty finger when asked to give a message for the American artist.

After failing to have their tickets refunded, Khudhair said they would just go back to Manila to join the New Year countdown in the Mall of Asia in Pasay City.

Brown, 24, has been in and out of jail and rehab after a series of complaints against him including the assault on his ex-girlfriend and Barbadian singer Rihanna.