Star-studded ‘royal wedding’ with a cast of a thousand 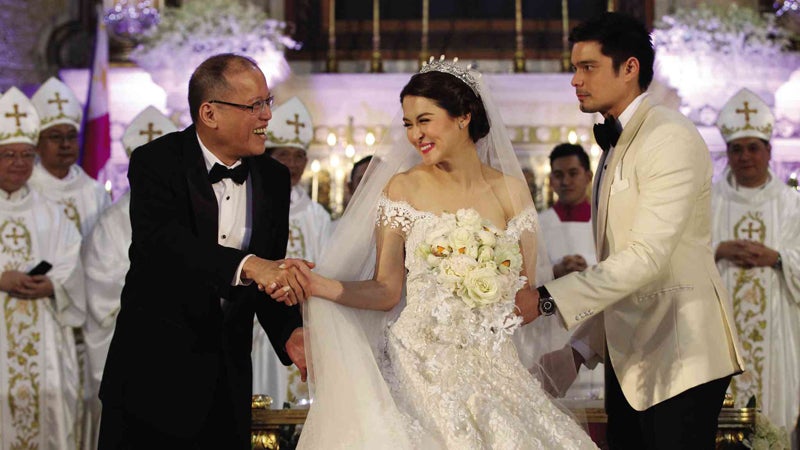 ‘DONGYAN’ WEDDING Perennial bachelor President Aquino is First Witness at the wedding of Dingdong Dantes and Marian Rivera at Immaculate Conception Cathedral in Cubao, Quezon City, on Tuesday. The wedding described by their home network GMA 7 as fit for royalty was officiated by Cubao Archbishop Honesto Ongtioco who was assisted by eight bishops and seven priests. MALACAÑANG PHOTO BUREAU

MANILA, Philippines–They looked deep into each other’s eyes as they said their vows, and when at last they kissed, it was simply “sweet and solemn” and lasted under 10 seconds.

Nothing elaborate or overly dramatic, said a friend of the groom, who was nonetheless moved to tears.

Their home studio, GMA Network, tagged it a “Royal Wedding.”

Roads leading up to the cathedral were closed “for a special event” from 7 a.m. Monday to 9 p.m. Tuesday, as a giant TV monitor, bleachers for the fans, metal barricades and portalets were set up. Security in and around the church was tight, with about 500 security personnel—including the Presidential Security Group meant to secure Witness of Honor President Aquino, the MMDA staff and local police—deployed to regulate traffic and assist guests, according to barangay (village) captain Ramon Salas.

If that were an accurate count, it’s a lot more than the number employed to secure all the major local awards nights combined.

Which was what the wedding initially looked like: an awards night.

Guests trickled in at 1:45 p.m., with the ceremony slated to start at exactly 2:38 p.m.—something to do with the couple’s favorite number 8, according to wedding planner Teena Barretto. Reception was set at 6:08 p.m. across town, at the Mall of Asia Arena.

Even the normally stern members of the security contingent couldn’t help smiling at the glittery sight.

Groom on a Ducati

The crowd erupted in ear-splitting shrieks when the dashing groom sped past the barricades and got off a shiny black Ducati motorcycle. He turned to an assistant for his coat—a cream-colored number by Randy Ortiz, who has dressed up the actor for the past 10 years—slipped on a pair of eyeshades and looked around the church where he was christened. Dantes obliged a few fans for photo-ops, before striding into the church to await his bride.

Rivera arrived around 3 p.m., 22 minutes past her “call time.” She was driven in a restored blue vintage 1976 Mercedes Benz sedan that could barely contain her gown. All that the oglers could see were a pile of wispy fabric and a giddy smile on her pixie face.

As the car, said to be one that Dantes learned to drive in—slowed down and finally stopped before the main entrance of the church, the designer, Dubai-based Michael Cinco, and several assistants rushed to pry Rivera and her voluminous gown off the vehicle. She stood up and faced the doors, while Cinco’s staff scrambled to lay out her meters-long train.

All the while, fans watching the proceedings on a jumbo screen screamed and called out Rivera’s name. A middle-aged woman gasped, “So beautiful, she looks like the Virgin Mary!”

Inside, the principal sponsors had commenced their march to Pachelbel’s “Canon in D.”

Dantes looked upbeat, at one point giving a double thumbs-up while making his way to the altar. The cool demeanor was just for show, it turned out. Standing next to President Aquino at last, he grew visibly more and more anxious as they made small talk.

The 60-piece children’s choir began singing and the main doors swung open to reveal the resplendent bride. She walked down the aisle ever so slowly, looking to the left and then the right, smiling into the sea of blinding camera flashes.

White flowers, including roses and orchids, filled the church, recalled Quezon board member Gerald Ortiz, a longtime friend of the groom. “The whole setup was very elegant,” he said, adding that the refurbished air-conditioning system was the couple’s gift to the church.

Ortiz estimated the seating capacity of the church to be between 600 and 800. “There were just enough guests, with an average of only four people seated on every pew. There were as many production people as guests. It was like a movie set.”

He added: “It was also like a show of high fashion and expensive jewelry. I had never seen such expensive-looking accessories.”

Midway through her walk, Rivera was joined by her parents, Francisco Javier Gracia and Amalia de los Santos. From where he stood, Dantes watched, on the verge of tears, puffing his cheeks and rubbing his palms together as his bride inched closer. “He’s about to cry,” some friends were overheard saying.

The Mass, which ran for more than an hour, was officiated by Cubao Bishop Honesto Ongtioco and seven other bishops. Retired Novaliches Bishop Teodoro Bacani, Jr., a close friend of the groom, delivered the very personal homily.

Bacani, who apparently follows the couple’s show-biz career, jested, “Pinagsama kayo sa ‘Dyesebel’ (You worked together in the teleserye Dyesebel)… Dingdong, you fell for a mermaid!”

Though Dantes looked nervous and a bit sweaty, Rivera seemed to be very relaxed, smiling a lot and casting longing looks at her partner.

Bacani urged the couple to star in their own “theo-drama.” He explained: “A teleserye is a work of fiction; a ‘theo-drama’ is real. A teleserye has writers, directors and producers; in a ‘theo-drama,’ God is the producer, writer and director, and you’re the principal characters.”

Dantes’ hands shook a little as he slipped the ring on Rivera’s finger. When he lifted the new Mrs. Dantes’ veil for the much-awaited kiss, she briefly rested her head on his chest, and giggled. They mouthed, “I love you.”

They then raised each other’s hand, as the crowd outside broke into a chorus of cheers, the kind heard every time boxing icon Manny Pacquiao vanquishes an opponent.

Television brought these lovebirds together. In 2007, Dantes, already a matinee idol, was paired with fledgling star Rivera for the network’s remake of the Mexican telenovela, “Mari Mar.” Their chemistry was palpable. The show, a hit, interestingly ended with a wedding and reception episode that was aired live.

They have since top-billed other TV series and movies like “One True Love.” In 2009, Dantes and Rivera revealed they were dating exclusively.

More recently, the couple had been neck-deep in numerous pre-nuptial engagements on top of promotional activities for separate entries in the ongoing Metro Manila Film Festival. Dantes admitted on television that he was feeling a bit stressed, but said he and his fiancee would make sure to take a breather.

Three days before the wedding, the couple had a long talk with Fr. Tito Caluag, former principal of Ateneo de Manila High School, Dantes’ alma mater. “The most important preparation of all is prepping the spirit,” the actor said in a post on Instagram.

Who’s who in show biz

The reception was held at past 6 p.m. at the SM Mall of Asia Arena, where more of the newlywed couple’s friends were invited, reportedly 1,100 invited guests in all.

What’s next for the couple? Rivera was quoted in online reports as saying she wants a baby as soon as possible: “After the bridal showers, baby shower naman!”

TV5 head of entertainment division Wilma Galvante said she wished for the newlyweds to “always have laughter in their lives. They joke around a lot. It’s good that they are lovers and at the same time friends.”

GMA president and CEO Felipe Gozon also said he would like the couple “to have plenty of children.”

Belo’s advice to the couple: “There should be balance in everything you do. It’s good that Marian also involves herself in Dong’s interests—his motorcycles, his NGOs. I hope Dong continues to be the romantic type and showers Marian with gifts, as well as love and affection.”

Television host and entertainment columnist Lolit Solis was “both happy and sad” about the wedding. She explained: “So it’s true that they consider me their second mom because they asked me to be a ninang (principal sponsor). But that means I can no longer expect Christmas gifts from them—and they’re very good gift-givers. I’m their ninang now. In any case, I think they will produce cute little DongYans soon.”