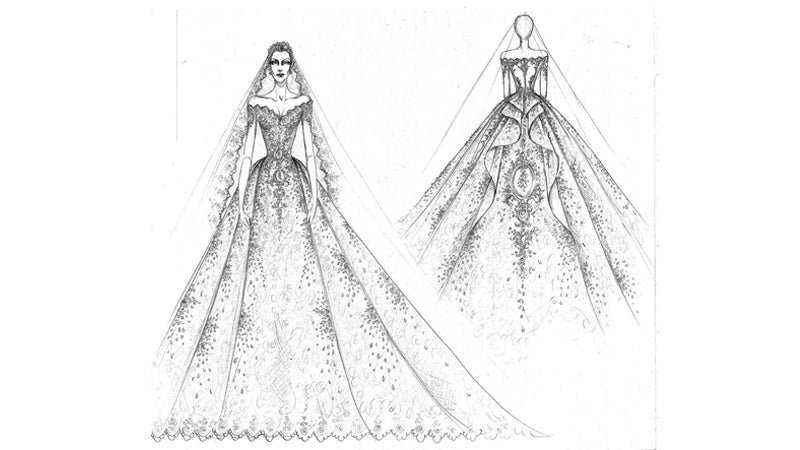 Sketch of the wedding gown of Marian Rivera

MANILA, Philippines–Actress Marian Rivera walks down the aisle Tuesday at the Cathedral of the Immaculate Conception in Cubao, Quezon City, to become Mrs. Dingdong Dantes.

She will wear a wedding gown by Michael Cinco in ecru French lace studded with Swarovski crystals and reportedly costing around P2 million.

The gown has an off-the-shoulder neckline with a cinched waist and a flowing ball gown skirt.

Rivera will also wear a mother of pearl crown especially designed by Cinco and made in Lebanon, and a veil of scalloped tulle and lace.

Cinco, who is based in Dubai, is here in Manila to supervise the couple’s wedding day with its Spanish romance theme.

“My inspirations are the architecture of the Alhambra as well as ancient tiles from Madrid. Marian is actually petite at 5’2” so I designed gradual scalloping on the wedding veil and the train,” the designer said.

Marian will wear two trains—one for the church ceremony and the other for the reception—a sit-down dinner for 1,000 at SM Mall of Asia Arena.

As a young boy, the actor-groom Dantes attended Mass at the Immaculate Conception Cathedral where he prayed that he would someday walk hand in hand with his partner for life.

The Spanish-themed wedding party will involve many local designers. Stylist Noel Manapat instructed all the designers to do specific outfits for the wedding party. The groom will wear a formal tuxedo by Randy Ortiz while the parents of the couple will wear suits and gowns by designer Paul Cabral.

The bridesmaids and flower girls will wear red gowns by Michael Leyva. The secondary sponsors will wear creations of Joey Samson and Ivarluski Aseron.