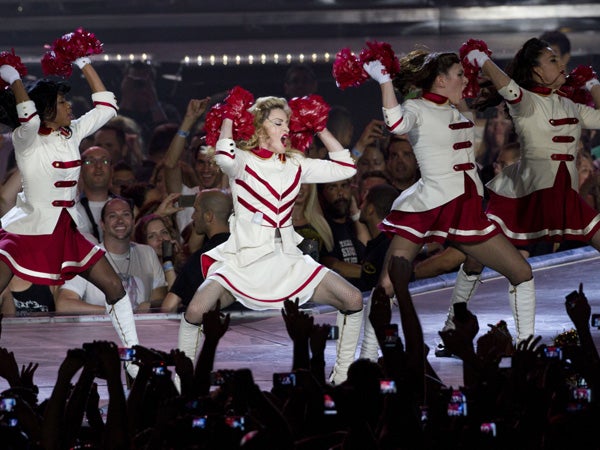 U.S pop icon Madonna performs at the Ramat Gan stadium near Tel Aviv, Israel, May 31, 2012. The pop music star abruptly released six new songs ahead of schedule after early versions of them were leaked online. AP

NEW YORK, United States – Madonna on Saturday suddenly released six new songs months ahead of schedule, furious that early versions had leaked online in what she had described as “artistic rape.”

The songs will appear on the pop icon’s first album in three years, “Rebel Heart,” which comes out in March. The six tracks show Madonna going further in a hip-hop direction and include collaboration with leading female rapper Nicki Minaj.

The Material Girl said she decided to put the songs on sale online after in-studio versions of her tracks dripped onto the Internet.

“I would prefer my fans to hear completed versions of some of the songs instead of the incomplete tracks that are circulating. Please consider these six songs as an early Christmas gift,” Madonna said in a statement.

Madonna earlier took a more livid tone on social media. On Instagram, she called the distribution of her unfinished songs “artistic rape” and “a form of terrorism” against the creative process.

Madonna deleted the message but in a series of further postings — including one accompanied by a scantily clad photo of herself off the Internet that she said had not intended to release — she asked for leads to figure out how her demos got out.

The leaks came as entertainment giant Sony suffered a major hack, linked by US investigators to North Koreans upset over mockery of their leader in the since-cancelled film “The Interview.”

The leaks of Madonna’s music are unlikely to be connected as she is distributed by rival music group Universal.

Leaking has become an increasingly common problem for artists in an age where copying music takes little technical skill. Lady Gaga last year also released music early after leaks, while Beyonce avoided the problem by releasing an album with no prior publicity.

Going in an R&amp;B direction, ‘bitch’

The new songs show Madonna — the creator of some of the most recognizable dance pop of the 1980s — further going into an R&B style, which she had touched on going as far back as 1989’s “Like a Prayer” and embraced on her 2008 album “Hard Candy.”

One of the new songs, “Living for Love,” merges elements from Madonna’s career. Her vocals show clear R&B influence as a funky urban beat builds into club-packing house music.

The song could be read as delving into Madonna’s notoriously turbulent love life, with the anthem-like lyrics, “Lifted me up, and watched me stumble / After the heartache, I’m gonna carry on.”

Madonna, whose purported romances have provided tabloid fodder since her eight-year marriage to British filmmaker Guy Ritchie ended in 2008, unleashes anger to an unnamed ex-lover in the evocatively titled “Unapologetic Bitch.”

Pursuing a lyrical theme, another song is called “Bitch, I’m Madonna” as the 56-year-old pop icon raps with the younger Minaj in a hip-hop anthem on the joys of unabashed late-night partying.

Madonna shows her warmer side on the ballad “Ghost Town” and goes in a completely different lyrical direction on “Illuminati,” in which she plays on the 18th-century conspiracy theory of a global secret society.

“It’s the Enlightenment that started it all / The Founding Fathers wrote it down on the wall / And now the media’s misleading us all,” Madonna sings as she name-checks everyone from Steve Jobs to Queen Elizabeth II to ISIS.

The songs come after what had been a quiet 2014 for Madonna, who dropped off Forbes’ annual list of the highest-earning female musicians after topping it a year earlier.

Madonna has yet to announce concert plans. “MDNA” was accompanied by an extensive global tour that grossed more than $300 million and generated controversy as she raised her voice on issues from gun control to gay rights to Europe’s far right.

Singing nun gives pope CD with ‘Like a Virgin’

PH off US list of piracy hot spots after 20 years