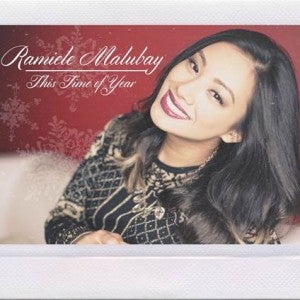 The Christmas EP Album is now available on iTunes http://ow.ly/FuH2b.

The album is also available on Amazon.com.

Ramiele, based in Miami, Florida, has been singing and performing since a young age. She is known for successfully auditioning and becoming a part of the television show, “American Idol” (Season 7), where she finished ninth.

On the show, she received rave reviews for her performances and finished ninth place. After American Idol, Ramiele toured with American Idol Season 7 Top 10 Finalists, toured the Philippines, appeared on several television shows in the United States and performed the “American National Anthem” for the Manny Pacquiao and Miguel Cotto fight at the MGM Grand Las Vegas.

Aside from performances, Ramiele has also been able to return to school to complete her nursing degree. As a gift to all of her fans and supporters over the years, Ramiele brings the holiday spirit in the Christmas EP, This Time of Year.

Ramiele states, “I’ve always wanted to be release a Christmas album and I really hope that people do enjoy it, as much as the team and I enjoyed creating it.”

The EP includes favorite Christmas hits, such as “Have Yourself a Merry Little Christmas,” ‘The Christmas Song,” “O Holy Night” and a duet with R&B singer Russy Isberto for “Baby It’s Cold Outside.”

With the craft of producer/songwriter Elvin Reyes and songwriter Manilene Ginelsa, the EP features an upbeat original titled “Holidays Are Here” and the title song, “This Time of Year.”

Chris Baldomero and Anthony Ancheta of Breakstone Productions, along with Elvin Reyes, are featured producers who will be working on Ramiele’s full-length album to be released in 2015.

This Time of Year

This Time of Year is Ramiele Malubay’s first EP album release, distributed by 37 Entertainment and Select-O-Hits Distribution. The album’s executive producer is The Luna Company, Inc., the management company for Ramiele Malubay and other artists.