‘Singin’ in the Rain’ next on his list for PH 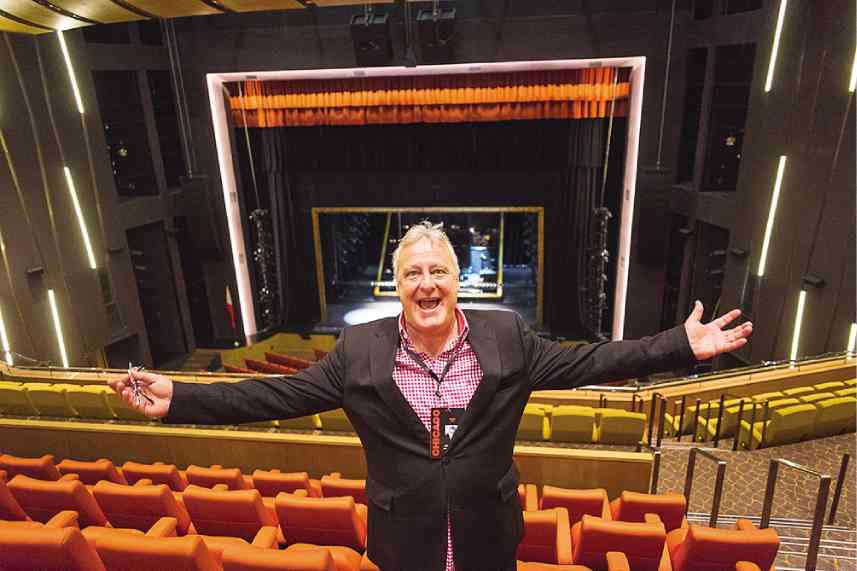 We shouldn’t be talking about him, he insists, “We should be celebrating this wonderful place!” British theater producer James Cundall is exclaiming about The Theatre in Solaire Resort and Casino, where the Manila season of the Broadway hit “Chicago” winds up tonight.

“Rhapsodizing” may be more appropriate. It is, after all, a lyric theater. “It is nothing short of historic that Manila has built something like this now. Before this, there was only the Cultural Center of the Philippines for me,” says Cundall, who has brought several West End and Broadway shows to the CCP. “I love it (the CCP) still, but (again) look at this.”

He pats his seat almost lovingly—we’re inside The Theatre the morning of the “Chicago” premiere. “Look at these… 1,760 in all and so much legroom! You’ve seen how cramped West End theaters are.”

We suggest that there were probably smaller British people when those theaters were built? “Or big people who didn’t mind being squeezed together. I’d take this anytime,” Cundall says, beaming. “State of the art. Look—crewmen walking above us, as we speak!” 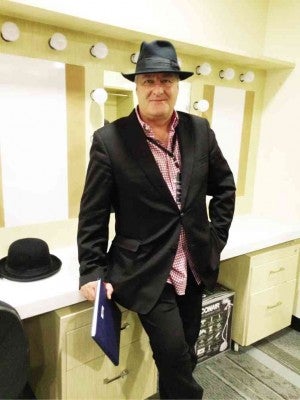 CUNDALL—producer, former banker—tries on another hat in one of 12 dressing rooms. EMMIE G. VELARDE

We think there can be only one explanation for this unbridled enthusiasm and we verbalize it, only half in jest: Does he partly own it? “No, no, no, heavens, no,” Cundall laughs. “But we sat down many times with the designers and builders. You may say I’m emotionally invested.”

It is just fitting, he says, to have a “proper Broadway show” inaugurate The Theatre. Cundall’s Lunchbox Theatrical Productions and local partner Concertus Manila have brought to the Philippines “The Phantom of the Opera,” “Wicked,” “Mamma Mia,” “Stomp,” “Potted Potter” and “The Music of Andrew Lloyd Webber.”

He points out, “This is the first time, with ‘Chicago,’ that we have produced a Broadway show here with a Broadway cast.”

“Chicago” is Cundall’s favorite, to boot. He’s watched it “close to 40 times around the world” and knows most of the songs by heart. Which is not hard to believe, considering that, in Sydney alone in 2009, he produced the musical for a 15-week season.

He sings, with a little wink, “Give ’em the old razzle-dazzle…” but his true favorite is “Class” because, he says, it evokes so much nostalgia for the old days. (It does, even if the lyrics, as deliberately and succinctly written, would better suit the title “Crass.”)

Cundall gives the Inquirer a backstage tour, like a kid showing off his playroom. “I have never had a production work in such a big and bright space,” he says.

He opens the door to the laundry room: “Will you look at that?”

Next, one dressing room: “See?”

Next, another dressing room, where he tries a hat on: “There are 12 of these rooms, plus a green room, a rehearsal studio, production offices… it’s a dream for any theater company.”

His next planned project for Manila audiences: “Singin’ in the Rain,” based on the 1952 movie directed by and starring Gene Kelly. “We’re talking of 12,000 liters of water on that stage per performance,” Cundall says, and assures us, “It will all be recycled.”