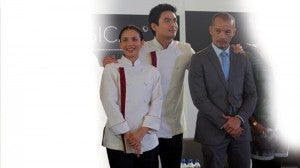 SINGAPORE – Australian choreographer Jason Coleman described the Filipino actors in the drama series “The Kitchen Musical” as “very natural,” adding that the best part of the project is the Filipino influence on- and off-screen.

“They’ve got great spark,” Coleman pointed out. “I call it the Judy Garland effect – Karylle has this. She’s very likeable. There’s something in her eyes. There’s fire within her, there’s spunk.”

Coleman is in charge of overall choreography in the TV series, which premieres in various Asian and European countries this month. In the Philippines, its first episode airs tonight at 10:45 on ABS-CBN. Succeeding episodes air on Saturdays at 7:30 p.m. starting October 8 on Studio 23.

The musical follows the story Maddie, played by Karylle, a rich young girl who goes to work at her father’s famous restaurant, The Avilon, after graduating from the culinary school Le Cordon Blue in Paris. Christian Bautista is sous chef Daniel, Maddie’s childhood friend and shoulder-to-cry-on. Arthur Acuña is Harry, the restaurant’s general manager.

“These Filipinos are amazing singers,” Coleman noted. “I know because to be considered a singer in the Philippines, you have to be really good. Off set, we have a bunch of Pinoy folks in here. We’re such a family, and this has a lot to do with the Pinoys. They’re caring and sharing people. They’re also very funny. They smile at everybody and about everything. That’s a good thing.”

Coleman called Bautista a “smart and hardworking” performer, even as the actor admitted having difficulties with some of the dance routines.

“The first thing I did with Christian was to make him feel comfortable,” Coleman said. “Then I created dance steps for him. You see, I don’t make up steps at home and expect him to be able to do them. I create with Christian in my head, with his ability, his limitation, with what he’s good at.”

He then recalled the time Bautista’s family came by to visit. “His dad asked me, ‘Jason, what did you do to make Christian dance so well?’ I just said I made him believe in himself and worked with him on a daily basis,” he said.

FilharmoniKa founder and conductor Gerald Salonga is the show’s musical director and arranger.

Coleman was the choreographer and dance consultant for the animated film “Happy Feet.” He is currently a judge in the Australian hit TV series “So You Think You Can Dance.” In 2008, he opened the Jason Coleman’s Ministry of Dance, currently the largest dance school in Australia.

“The makeup has to last for 12 hours,” said Della Maggesa, better known in the fashion circuit as Max the Joker. He has collaborated with the likes of Gianni Versace, Missoni, Alberta Ferretti and the Estee Lauder Group.

To keep Karylle looking perfect as Maddie, Della Maggesa applies “only natural colors and do a little bit of contouring.” He added: “I use natural, rosy lipstick. I use colors that are young and less sexy. After all, she’s working here. She’s always in the kitchen.”

Della Maggesa said it was so easy to make Vanderbroucke pretty that he could do it with his eyes closed. “She’s naturally beautiful. When I do her face, I get really quiet. Like when you look at the Mona Lisa, you just shut your mouth and stare.” He added that since Rosemary is a supermodel, she can wear makeup that is “fashionable and real at the same time.”

He said he would apply on Rosemary colors that are “natural and sexy, with a lot of gloss and shimmer. I give her shiny eye-shadow and lots of mascara and contouring.”

For the show, Della Maggesa has created a special collection of lip colors. He called them Jelly Butter, Aubergine, Carrot, Red Radicchio and Red Tomato. “I created them just for the musical. It’s a gift to the audience,” he explained. “Some of the cast members can become icons. People would actually want to be like them, eat the food they eat, sing their songs and want to be in the same mode. It’s so easy to be in the mode with makeup.”

The Hong Kong-based Vanderbroucke, considered one of the most significant fashion icons in the former British colony after having won the Elite Model Look in 1996, admitted it was hard to look fabulous all the time. “Especially when you’re always called in at 6:15 a.m. like today,” she told Inquirer Entertainment.

“Sometimes we work 12 hours a day,” she revealed. “I just try to find a balance in between. I love to run for 45 minutes a day. It’s not working out, it’s more of a release. I also meditate. It’s so healthy for a person to have that throughout the day.”

Vanderbroucke said adjusting to the show’s work schedules had been tough. “We have only have one day off. There’s not very much downtime. It’s very challenging because I’m also studying to become a health and fitness professional. It’s actually a certification in Hong Kong, so once I finish this [show] I have to go back and take my exam. It’s hard but I’m loving every bit of it.”

Raghman Hughes agreed, adding that work is very physical. The cast all attended a kitchen boot camp prior to shooting the series. “We all learned the skills –chopping, plating, even passing time deadlines. We had to cook certain things just to get to feel the pressure and the mentality of cooking,” he said. “The kitchen is an incredibly animated place. We had to understand that and make sure we bring that to the show.”

Learning about food, he said, “opens your mind because suddenly you’re now thinking, ‘what’s in this food?’ I was in a fine-dining restaurant the other day. I saw my meal and thought to myself, ‘this is finely presented but I’d rather put this here and there.’ I now think about the presentation of the food. It’s very strange.”

“It’s actually very interesting,” added Vanderbroucke. “I had to learn mixing cocktails.” She added that the most significant part was learning about wine pairings. “I can’t reiterate how valuable it is to complete the whole dining experience. I really appreciate that. Now I know what to order. Sometimes, you keep ordering the same bottle even though your food is different, and you’d say ‘this wine isn’t as good as I remembered it.’ What you don’t know is that your palette keeps changing.”