All we want for Christmas is Michael Bublé 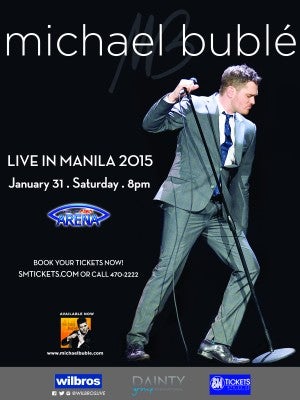 All we want for Christmas is Michael Bublé, and he’s coming to Manila on January 31, 2015, at the Mall of Asia Arena.

The Canadian four-time Grammy Award winner, Michael Bublé, delivers a full-length Christmas album with an old-fashioned taste, done in the best possible way. The album, entitled “Christmas,” is a beautiful coalescence of swing and contemporary pop that satisfies lovers of music. Regardless of one’s music genre choice, Michael Bublé’s “Christmas” will surely hype up the holiday cheer.

Bringing together the most popular Christmas songs such as “Have Yourself a Merry Little Christmas,” “Silent Night,” “Jingle Bells” and “All I Want for Christmas is You,” this 16-track album perfectly encapsulates the holiday season vibe. An evident standout is his rendition of Mariah Carey’s “All I Want for Christmas is You” as he injects a pop ballad touch to the Motown-influenced original. A Bublé original, “Cold December Night” is also included in the album.

Bublé said, “Christmas has always been my favorite time of the year for me and my family, so naturally, it’s been a dream of mine to make the ‘ultimate’ Christmas record. Even though it was summer and 95 degrees in LA, we totally got into the spirit of the holiday.”

Over the years, Bublé has already made an indelible mark in the international music scene. His phenomenal albums which has spawned chartbusting hits like “Fever,” “Home,” “How Can You Mend a Broken Heart,” “Sway,” “To Love Somebody” and many more are testaments of his caliber as an artist.

Pinoy Big Band enthusiasts will once again catch a glimpse of Bublé’s stellar performance as the multiawarded crooner graces the Mall of Asia Arena stage.

Have yourself a very Bublé Christmas. Catch Michael Bublé Live In Manila on January 31, 2015, at the Mall of Asia Arena.