TV actress apologizes: Rape is ‘certainly not a joke’ 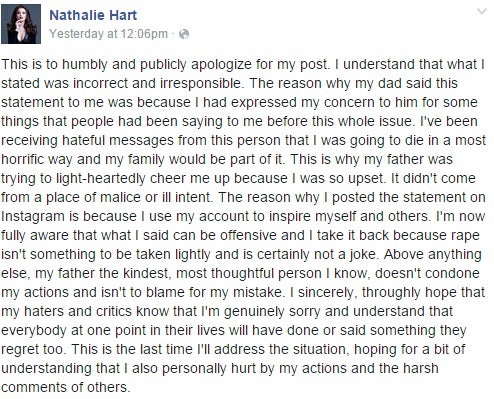 The photo she had posted, which irked netizens, showed a woman sitting on top of a pile of luggage with the caption, “If rape is inevitable, lay back and enjoy it.”

“This is to humbly and publicly apologize for my post. I understand that what I stated was incorrect and irresponsible,” Hart said.

“The reason why my dad said this statement to me was because I had expressed my concern to him for some things that people had been saying to me before this whole issue,” she said.

Explaining the incident, she said, “I’ve been receiving hateful messages from this person that I was going to die in a most horrific way and my family would be part of it. This is why my father was trying to light-heartedly cheer me up because I was so upset. It didn’t come from a place of malice or ill intent.”

The actress defended her father from critics, saying her father is the kindest, most thoughtful person she knows.

Her father, she said, “doesn’t condone (her) actions and isn’t to blame for (her) mistake.”

She said she posted the statement on Instagram because she wanted “to inspire myself and others.”

“I’m now fully aware that what I said can be offensive and I take it back because rape isn’t something to be taken lightly and is certainly not a joke,” she said.

“I sincerely, thoroughly hope that my haters and critics know that I’m genuinely sorry and understand that everybody at one point in their lives will have done or said something they regret too. This is the last time I’ll address the situation, hoping for a bit of understanding that I also personally hurt by my actions and the harsh comments of others,” she said.