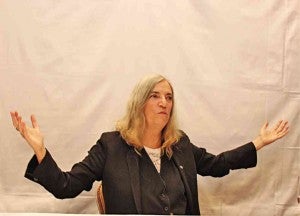 THE ESTEEMED singer says she now understands her mom, being a mother herself. photo by Ruben V. Nepales

LOS ANGELES—Filmmaker Darren Aronofsky himself showed up to introduce Patti Smith, the iconic godmother of punk, poet and visual artist, before we interviewed her recently at the Ritz-Carlton Central Park in New York. The two had collaborated on his film “Noah” where she sang and composed the theme song, “Mercy Is.”

In his intro, Darren said in part, “The Commander of the Order of Arts and Letters by the French Ministry of Culture, inducted into the Rock and Roll Hall of Fame, winner of the National Book Award (for her memoir ‘Just Kids’), as well as a recipient of the Polar Music Prize, the great, legendary, iconic Patti Smith.”

Darren recalled how he and Patti got to work together. “It was one of those late nights in Venice,” began the director, referring to the year (2011) he headed the Venice Film Festival jury. “We were walking around and getting lost. I was struggling because I was working on ‘Noah,’ thinking and dreaming about it. But there was one part of ‘Noah’ that was really difficult, which was this lullaby that was this huge emotional part of the film, where Noah (Russell Crowe) had to sing to his adopted daughter, a baby then (played later in the film by Emma Watson). He had to sing to calm her down since she was wounded and had lost her father.

“Not only that—at the end of the film, Emma, as a grown daughter, had to sing it back to Noah to break his heart and be merciful… So I was telling Patti about this problem and how I needed this lullaby. She was like, ‘Me, me. I love lullabies. They have been a major part of things I have done and songs I have written. May I please write the song for the film?’ I was like, ‘Yeah.’ I tried to act cool. Then I was like, ‘But then you are going to have to sing it at the end as well.’

“So the song is performed three times in the film—by Russell, Emma and at the end (by Patti).”

Patti, tall, silver-haired, smiled graciously and stood by as Darren paid tribute to her. (After the interview, Darren, who enjoys a long working relationship with Fil-Am cinematographer Matthew Libatique, told us he liked the documentary of another Fil-Am, “Documented,” by Jose Antonio Vargas and admired the Pulitzer Prize-winning journalist and immigrant rights activist’s views.)

In an interesting twist in her career, the singer-songwriter who led New York’s punk rock scene with her 1975 debut album, “Horses,” is singing in a Christmas concert at the Vatican. It turns out that this will be her second time.

“Unbeknownst to many, I performed in the same concert last year,” clarified Patti, who turns 68 on Dec. 30. “I was asked to perform. I was surprised but very pleased. I sang ‘O Holy Night’ with the Vatican Orchestra. Then they asked me to sing ‘Because the Night’ (her hit single which she wrote with Bruce Springsteen) which is very popular in Italy.

“I know the Pope didn’t attend the concert. Sometimes he does and sometimes he doesn’t. But he was well aware of it and many Cardinals were there. I know they were pleased and they asked me to come back again. So I am going back this year.”

She added, “I did meet the Pope twice. He’s the true people’s Pope. He dresses more humbly than any other Pope. He doesn’t sit in a big, costly throne. He has a simple white chair. He loves to escape all of the protocol, run down the steps and talk to the people in the audience, which always upsets the security.”

Patti, who was raised as a Jehovah’s

Witness, also said of the Pontiff who’s coming to the Philippines in January, “He’s trying to make certain sweeping reforms. This is very difficult and complicated, just as it is for a president in a government. He’s trying to reform the Church by example. I like him. I am not Catholic but that doesn’t matter. I am not a Tibetan Buddhist but I like the Dalai Lama, too. I always pay attention to our world and spiritual leaders and see what kind of impact they are making on our world.”

Speaking in gentle, soothing tones, Patti shared her thoughts on love and faith, relationships with controversial and celebrated photographer Robert Mapplethorpe and rock guitarist Fred Smith, both of whom have died (she also had a relationship with actor, playwright and director Sam Shepard).

“If we are lucky to live a long life, many things evolve—our ideas of prayer, God, love and family,” she said. “When I was a child or a young person, I couldn’t wait to be free of my parents. Now that my parents (Grant and Beverly) are gone, I love them more than ever. My love magnifies and all of the things that they taught me or tried to teach me also magnify.

“I find that as I get older, I understand more… my mother’s love that seemed so invasive or controlling or whatever I was trying to rebel against. Now, being a mother myself, I comprehend the nature of her love.

“I have been lucky to have love in my life, whether it was youthful love with Robert or my late husband (Fred) who was the love of my life. He was a complicated man sometimes. Life wasn’t always easy but I truly loved him. Like with my parents, I find that my love hasn’t diminished or receded but magnified.

“Love of God or understanding the teachings of Christ—all these things in my life are constant questions that keep evolving. One thing I like about getting older is that your spectrum and capacity for compassion widen. So I would say at this stage in my life, not having a boyfriend, that my love extends to my children, work and humanity in general.

“I find that love at this time in my life is not tinged with cynicism, regret or suspicion. It’s just simple. I think that’s just the basic Christian lesson that sometimes takes us years to understand. As (the character) Garance said in ‘Children of Paradise,’ ‘Love is so simple.’”

Patti, who listens more often to opera these days, expressed wonder that young people flock to her concerts. “The new generations come to our concerts,” she pointed out with her benign smile. “I look at the audience and there’s a plethora of 20-year-olds. It breaks my heart that they would even come to see us play or listen to what we have to say.”

Of “Just Kids” which won the National Book Award for Nonfiction in 2010, Patti said, “I wrote the book because Robert Mapplethorpe asked me if I would write our story the day before he died on March 9, 1989 from complications from AIDS. He was my great friend, collaborator and my love when we were young. We did have such a wonderful story that he often asked me to recount to him when we were low or didn’t have enough money to go out. I would tell him our story. So I knew what he meant when he said, ‘You will tell our story.’

“I was honor-bound to do it but I had never written a book of nonfiction. So it took me rather a long time…Because Robert wasn’t much of a reader, I tried to write the book as a little movie. I wrote it simply and cinematically to give to the people Robert as a human being, not merely dying of AIDS which is certainly enough of a story but he was a boy, he was young, funny, kind, tortured. I wanted people to get to know him.”

“There’s a lot of talk about it,” remarked Patti about adapting “Just Kids” into a film or other media. “Many people are interested in it in different formats. I really needed time away from it. It was a painful book to write. If I do something, no matter what format I use, I want it to be with the same attention that I put into the book. For me, the book is a movie already.

As for regrets in her life, Patti shared, “I would have spent more time with my mother. I was not a bad daughter. I took care of my parents. I did things that they were proud of, but I just wish that I got on a bus, went to South Jersey and spent a week listening to her stories for the hundredth time, trying to avoid her cigarette smoke, drinking another cup of coffee with her.

“I miss everyone. I miss the people that I love. Regrets are useless but that (spending time with loved ones) is one thing I wish I would have done more—just being more of her (mother) friend and spent more time with her. I don’t want you to get the idea that I was a bad daughter. My mother would never say that. But I just wish I could have spent just another week, another hour with her.”

At the end of the interview, Patti stood up and sang “Mercy Is” a cappella in her deep voice. It’s a beautiful, haunting lullaby that reverberates in my mind to this day.

Read Next
Bianca Gonzalez, JC Intal get hitched in Palawan
EDITORS' PICK
Notice of 2020 regular meeting of stockholders June 18, 2020
SM prepares for ‘safe malling’
Leveling up your ‘lutong bahay’ with the kitchen companion you never knew you needed
NBI, Immigration to join hunt for ‘underground’ medical clinics
2 Chinese nationals arrested in raid on another unlicensed COVID-19 hospital in Pampanga
P2.2 trillion in losses: Cost of COVID-19 impact on PH economy
MOST READ
Revillame tells Roque: ABS-CBN is in my heart despite being in rival network
NCR is ready for GCQ — Palace
LOOK: Robredo, Vico Sotto, check Community Mart ops in Pasig
Año: Quarantine passes not needed in GCQ, movement restricted to essential travel
Don't miss out on the latest news and information.