No staff-wielding peacenik, this military Moses 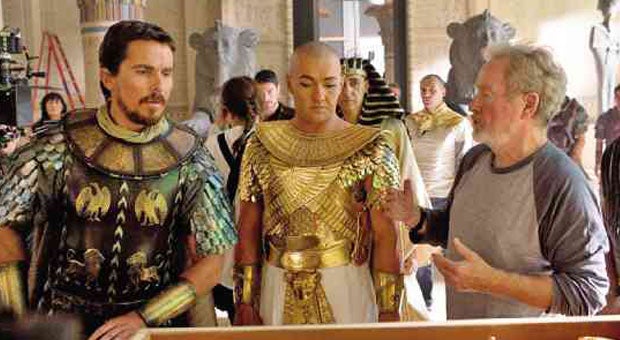 RidleyScott (right) focuses “Exodus” on the push-and-pull of the brotherhood between Moses and Ramses, played by Christian Bale (left) and Joel Edgerton.

This is not the Moses film you were expecting—which is not necessarily a bad thing. Films built around Bible stories boast a built-in viewership but also sometimes alienate others outside their faith-based target audiences.

Cecile B. DeMille’s 1956 movie “The Ten Commandments” defined the biblical screen epic for many. It was set in the ancient past and boasted charismatic movie stars Charlton Heston and Yul Brynner. It was more than three hours long. The special effects made the plagues of Egypt frightening and the parting of the Red Sea truly spectacular—for its time.

That film was somewhat cheesy and classic at the same time. Adapting biblical stories can be challenging, but it’s also getting more common, as can be gleaned from the release of films as diverse as Mel Gibson’s “The Passion of the Christ” in 2004 and Darren Aronofsky’s “Noah” a decade later.

Now comes “Exodus: Gods and Kings,” a very modern retelling of the Ten Commandments story by visionary director Ridley Scott. Scott is probably the best director when it comes to portraying combat on screen, be it modern (“Black Hawk Down”) or ancient (“Kingdom of Heaven”). What he has done with “Exodus” is turn Moses’ story into a story about war.

The film begins with the Egyptian general Moses (Christian Bale) and the Pharaoh’s son Ramses (Joel Edgerton) leading the Egyptian army against the Hittites at the Battle of Kadesh. That battle establishes the martial beat that “Exodus” marches to. It may be two and a half hours long, but it briskly, determinedly moves from scene to scene with almost grim purpose.

Moses, of course, discovers his true Hebrew heritage and leads the Hebrews out of Egypt. Except that Bale’s Moses is no staff-wielding peacenik prophet. “Exodus” presents him as a military Moses, a man who never ceases to be the general. He trains the Hebrew volunteers in guerrilla warfare; he is almost too comfortable wielding a blade himself. The obstinate Ramses is not convinced, however, and then God sends forth the plagues. “Exodus” depicts the Hebrews’ battle for freedom from Egyptian domination as an actual battle.

Scott’s depiction of God is sure to prove controversial and provocative. It is central to the version of the Moses story that Scott is telling. It’s certainly not slavish to scripture but certainly does not ignore the Bible’s events, either. What Scott, openly an atheist, has put together is somewhat of an everyman’s take on the Book of Exodus’ most famous story.

On a narrative level, it means Scott freely switches events around and expands on the Old Testament tale. Not afraid to shake things up, he takes out or de-emphasizes parts he deems unnecessary. You may know what is supposed to happen, but Scott changes how it all happens. It is clearly a broad, big-budget attempt to tempt a diverse audience.

Yes, Scott turns the Book of Exodus into a real action movie, one whose violent and furious action scenes can be deemed audacious and shocking at the same time. DeMille never had the CGI wizardry that Scott has at his command, and so the plagues are tenfold in their horror here, the ancient city of Memphis much more imposing and, of course, the parting of the sea much bigger. It’s literally the Bible meets box office on all levels.

The primary actors are riveting onscreen. Bale’s Moses is a conflicted, angry man who wrestles with his honor and his pride—even with his God. Bale brings a fierce physicality to Moses that makes the Hebrew leader patently dangerous. Edgerton plays Ramses with nuance and menace, depicting a ruler more selfish than evil, but no less tragic in his flaws. The two leaders’ shared scenes are explosive. “I came here to tell you something is coming that is out of my control,” Moses warns Ramses. “Exodus” boasts fine support from a cast that includes Ben Kingsley, Sigourney Weaver, John Turturro and, in an offbeat casting choice, “Breaking Bad’s” Aaron Paul as Joshua.

With everything going on, Scott focuses “Exodus” on the push-and-pull of the brotherhood between Moses and Ramses, giving the film its most compelling human element. With this, the very ambitious “Exodus” hews much closer to director Ridley Scott’s sword-and-sandals masterpiece “Gladiator” than it does to “The Ten Commandments,” emerging as massive mainstream entertainment and not biblical inspiration, an intriguing movie really more about the war of kings than the work of God.