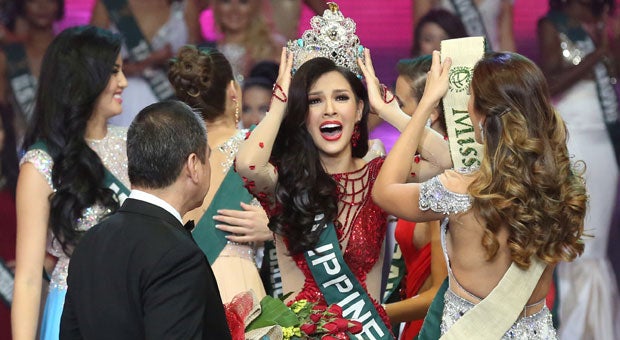 Ms. Philippines’ Jamie Herrell reacts after winning the Ms. Earth 2014 at the UP Theater in UP Diliman, Sunday. INQUIRER/ MARIANNE BERMUDEZ

MANILA, Philippines — The Philippines further established its status as a powerhouse in the international pageant scene with the coronation of Filipino representative Jamie Herrell as 2014 Miss Earth on Sunday night’s ceremonies at the University of the Philippines theater in Diliman, Quezon City.

The 19-year-old Herrell bested 83 other international delegates to become the second Filipino to wear the Miss Earth crown, after Karla Henry’s triumph in 2008. Both Henry and Herrell are from Cebu City.

With Herrell’s victory on Sunday, the Philippines matched Venezuela’s two-crown record in the Miss Earth pageant, sharing top spot as the countries with the most wins in the global tilt. Last year’s winner, Alyz Henrich, is Venezuelan.

Herrell, who took a break from her studies at the International Academy for Film and Television to prepare for the 2014 Miss Earth pageant, sustained the country’s dominance in the global pageant arena, which surged in 2013.

After her coronation, which punctuated a two-hour program, Herrell told the Philippine Daily Inquirer that she was offering her victory to God, who she said was the reason behind her victory.

Herrell’s religiosity was evident during a separate national costume competition, where she appeared in a Sinulog Festival-inspired outfit, holding an image of the Santo Niño.

The California-born, Masbate-raised Cebuana beauty will now become the face of the pageant’s campaign in raising environmental awareness.

When asked during the final round what step she would take to address global warming, Herrell said “I will use my title to inspire others, help our environment. And we should start with the kids because they are the people of tomorrow. They will help the communities.”