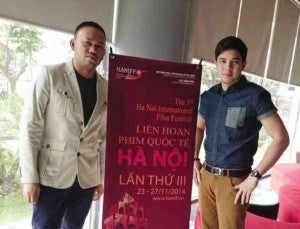 Heartthrob Alden Richards’ heart throbbed uncontrollably as he walked down the red carpet during the opening of the 3rd Hanoi International Film Festival on Sunday.

With filmmaker Adolfo Alix Jr., the GMA 7 star is representing the short film “Kinabukasan (The Day After),” which is competing in the shorts section of the fest that concludes today.

“I was nervous,” he recalled his heady, glittery red-carpet moment. “Then I saw Filipinos in the gallery cheering for me.”

This is his first time in an international film event. “A lot of young actors dream of this,” he told the Inquirer via e-mail. “It makes me proud to be Filipino.”

During the screenings on Nov. 23 and 24, he didn’t know what to expect. “But audience feedback has been encouraging,” he reported. 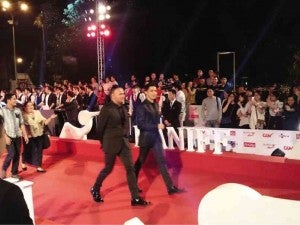 ALIX and Richards on the red carpet.

In the short film, he plays a young man who confronts a woman, played by Nora Aunor, who happens to be the lover of his recently deceased mother, portrayed by Rosanna Roces.

“Working with Ate Guy (Aunor’s nickname) was an opportunity of a lifetime. Being invited to Vietnam was a wonderful bonus,” he said.

Next stop for “Kinabukasan” is the Imagine Shorts program of the Singapore International Film Festival (Dec. 4 to 14). Bayani San Diego Jr.