‘Chicago’ as tribute to a beloved mentor 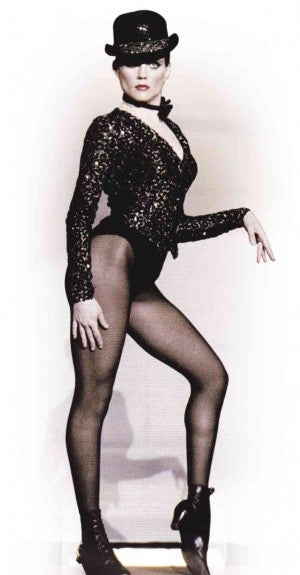 NO, THESE long, strong legs were never insured,
but Ann Reinking thanks the Inquirer for asking.
still from the “all that jazz” movie

Repeatedly, musical theater enthusiasts are reminded that the 16-year-old version of “Chicago the Musical” that is Manila-bound next week was choreographed by Ann Reinking “in the style of Bob Fosse,” one of its three original creators.

The statement is a case of, as one of the songs in the LSS-guaranteed soundtrack suggests, and we shamelessly draw parallels here, “the whole [being] a whole lot better than the sum of its parts.” It has its own elaborate back story.

Based on a 1926 play, “Chicago” was first staged in 1975 and received less-than-enthusiastically. The soft verdict was, it was ahead of its time; the harsher one took it to task for being “overly dark and cynical.” Plus, it probably “touched too raw a nerve” in the wake of the Watergate scandal.

Says director Walter Bobbie in the program notes: “The plot was shocking in 1926, cynical and satirical in 1975, and today feels like a documentary.”

At the center of that plot is Roxie Hart. In Bobbie’s words: “A nightclub dancer who dreams of [stardom] in vaudeville, kills her lover, then convinces her husband to…hire Chicago’s shrewdest lawyer, who turns her crime into celebrity headlines and gets his client acquitted.”

Curiously, the very same repellent in the past might explain its current continuing success. Today (Sunday in New York), “Chicago” officially becomes the longest-running American musical on Broadway, with its 7,486th performance at the Ambassador Theater, its home since 2003.

(The Tony-winning revival replaces “Cats” in second place overall, next only to “The Phantom of the Opera,” which is British in origin.)

On this very date in 2006, “Chicago” marked its 10th anniversary on Broadway. Most photographs of the stage proceedings post-performance show Reinking in tears. This was, as another song off the soundtrack, in another context, goes, “perfectly understandable.”

Ten years earlier, she had choreographed the musical’s revival and headlined the cast as Roxie. Of her work, New York critic Greg Evans wrote in the trade magazine Variety: “The spirit of Fosse’s genius never leaves the stage.”

It’s no secret how much Reinking valued, and values still, Fosse as a dancer and mentor. She said in a 1996 interview: “He influenced a generation. All you have to do is turn on MTV and it’s so obvious where it all came from.”

Evans described the revival as a “heartfelt homage” to Fosse: “[It] provides a thrilling reminder to those who’ve seen it before just how smart, sexy and exciting this brand of choreography was, or rather, is—the swiveling wrists, slinky shoulder rolls, slow-motion tableaux and angular poses…a homage that in lesser hands could be a cliché-riddled museum piece.”

This endearing connection may have sprung, in good part, from Reinking’s six years with Fosse as partner, on-stage and off. They remained friends and collaborators after they broke up. (She starred in his 1979 autobiographical movie “All That Jazz,” which was loosely based on their relationship.)

When the choreography for the “Chicago” revival (for the acclaimed “Encore” series at City Center) was offered to her by then artistic director Walter Bobbie, her immediate reaction was, she told the Inquirer, “A huge yes!”

Bobbie would go on to direct the show on Broadway. That the dance style should be an updated version of Fosse’s style was Reinking’s idea.

And when she finished the job, she felt it was yet another feather of distinction in her professional cap, “but more a gift, as well as a tribute to a beloved friend and colleague—Bob 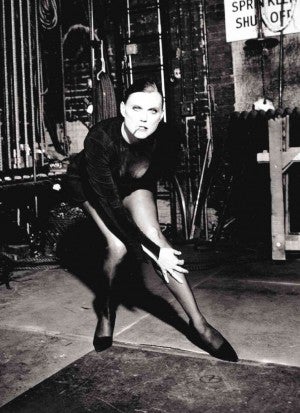 SHE DESCIBRED her choreographic style as “more balletic, quirky” than her mentor’s.

She earlier said of Fosse, who died of a heart attack in 1987, “He lived to wake people up, to make them really live.”

The 1996 report related that Reinking needed only a day to think over Bobbie’s next offer—for her to reprise the role of Roxie Hart, since the producers had failed to find a suitable new star.

Said the report: “As his collaboration with Ms Reinking progressed, Mr. Bobbie…

became intrigued with the idea of casting her as Roxie. The audience might be as riveted as he by the historic subtext: Fosse’s ultimate dancer reinterpreting her mentor’s steps.”

Reinking was 46. Needless to say, she had qualms, not the least of which was that she might hurt herself, physically.

But even the most famous Roxie up till that moment, Fosse’s former wife [of 16 years, the late] Gwen Verdon, was quoted to have said, “It’s perfect…she’s been through the mill and that’s what that character is about.”

When she first took on Roxie Hart in 1977, Reinking was 26, possibly too young for the part.

It was something of an event in other ways, to boot: Verdon was 51 at the time. It was something like reality TV, the after-premiere hearsay being, the true-life romantic subplot had brought the audience to its feet.

“At (age) 46,” Reinking said, “everything seemed to fit. It was a privilege to work again in the style of Bob Fosse and also a thrill to play Roxie again.”

Once she put on the cast member’s hat, she relinquished the choreographer’s reins and concentrated on her performance. “I would not correct dancers if I was performing,” she explained, “because I don’t believe in performers correcting other performers. I have always just tried to honor the work as correctly and as well as I can.”

Reinking’s “Chicago” choreography went on to win the Tony, Drama Desk and Outer Circle Critics awards in 1997, which makes it technically her best-recognized work.

She does not put more weight on this than on her other works, however. She told the Inquirer, “I put all my energy and thoughtful commitment to everything that I do. There is no other way!”

Reinking once described her choreographic style as “more balletic, more quirky” than Fosse’s. Close watchers did point to “significant” differences between the original “Chicago’” and her variation.

One of four ex-husbands, the media investment banker Herbert Allen, found hers “a good deal softer…funnier and less sleazy.” He said in another magazine interview, “The show is more lyrical now. There was a darkness to his vision; there is a lightness to hers.”

In “everything I do,” Reinking includes, naturally, dancing. YouTube has numerous videos of those famous long, strong legs in action, mostly “in the style of Fosse,” yes.

She has seen quite a lot of those videos. “I enjoy YouTube like everyone else,” she told the Inquirer. “It allows us to learn or get a glimpse at something [in the past]. Live theater is great and, hopefully, YouTube will inspire people to go to the theater.”

For the curious: She never had those legs insured. But she thanked the Inquirer for asking.

“Like a track-and-field meet” is how Reinking described her dual career in theater and in the movies: “For theater I am like a long-distance runner. For movies I am a sprinter! Same playing field, different approach.”

Her stage acting/singing has been critically praised:

Said Variety’s Evans in 1996: “Reinking, acting in a broad style that seems right out of a vaudeville sketch, overcomes any doubts about the approach as she hits just the right balance between cold-hearted dame and scared gal-done-wrong.

“Singing in lower registers, Reinking might not have Neuwirth’s powerhouse chops, but her warm phrasing and way with a lyric more than compensate.” 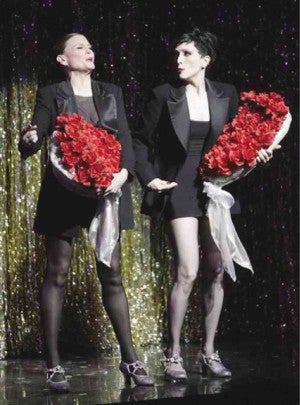 ROSES for Ann Reinking as Roxie (left) and Bebe Neuwirth as Velma after the dress rehearsal for the 10th anniversary show in 2006. AP

There’s no other role in “Chicago,” her “absolute favorite musical,” that she ever thought of playing, she said. “I’m happy with Roxie.”

And of the many—many—memorable lines she got to deliver as Roxie (including, “None of us got enough love in our childhoods; that’s show biz”), her favorite has always been, “I’m older than I ever intended to be!”

She explained, “It’s so funny and true for everyone!” Another favorite is, “When I see myself in Amos’ face, I’m always a kid.” That, she said, is love.

No, a dancer-choreographer like herself never retires, she said, “Not really. I just completed two story ballets with Melissa Thodos and her company Thodos Dance Chicago, on top of other ventures.” Reinking roars at 64.

Roxie may have sung these lines about her: “If life is a school, I’ll pass every test. If life is a game, I’ll play it the best.”