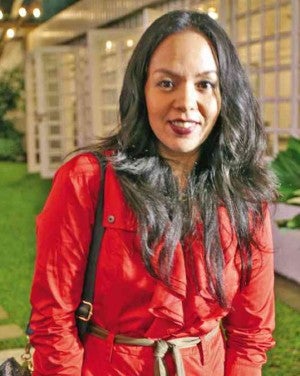 ON THE FLIP side of things, Maegan’s band will represent the country in the 2015 Memphis blues competition. photo by Kimberly dela Cruz

My heart goes out to my “soul sister,” Maegan Aguilar. Long before news broke about her problems with live-in partner Ali Sanchez, Maegan had confided in me about his mean streak.

Now, their domestic front has turned into a battlefront.

Last month, she called me because she needed to vent. But she asked that I keep everything hush-hush.

On Sunday, I sent her a text message to ask if I could divulge what we talked about in October. She gave me the go-signal so here it is …

Maegan’s gig at the Edsa Shangri-La lobby meant a great deal to her. Unfortunately, her regular gigs at the hotel were canceled because Ali caused a commotion there.

It’s a big loss of income for Maegan, who has two daughters to support. According to her, alcohol brings out the worst in Ali. She chose to bear the unbearable because she was blindly in love with him.

After every fight, she would take him back. Their “break up-to-make up” drama went on and on.

For the longest time, Maegan didn’t have the heart to leave Ali because she felt responsible for him. Finally, she reached her limit and decided to end their relationship. But Ali got upset and he turned her into a punching bag again.

More than the physical pain, Maegan is emotionally battered as well.

Out of her love for Ali, she kept silent about his abusive nature. But a woman can take only so much.

Meanwhile, although she has made peace with her dad, Freddie Aguilar, she is still waiting for his reply to her apology letter.

Her Aunt Marlene helped her pick up the pieces after she was thrown out of her dad’s place. When Marlene heard that she reconciled with Ali after the Edsa Shangri-La ruckus, she left Maegan to fend for herself.

Before Maegan and her band, Glass Cherry Breakers, competed in the Philippine Blues Competition, she sent me an invite on Facebook: “Sis, I have fever and fatigue. I’m having anxiety attacks because of the competition. Hope you can watch because you are my only family now.”

Too bad I wasn’t able to go because I was covering then a GMA 7 event in Bacolod City. Still, I had no doubt in my mind that Maegan and her band would top the contest.

Their victory is her well-deserved reward for all the heartaches she has endured.

She is super excited to fly to Memphis with her band to represent the Philippines in the blues competition in January 2015.

The Memphis trip serves as a much-needed boost, now that she’s going through a major crisis.

Knowing Maegan, she will bounce back in no time at all. My sister is made of sterner stuff.

Just like in the blues competition, she will emerge triumphant against all odds.

Cheer up, my dear sis! Let’s meet up and live it up soon. I am right behind you every heartbeat and heartache along the way.