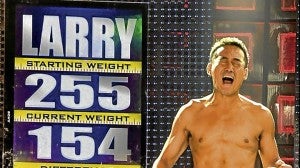 NAGA CITY, Philippines–“Biggest Loser Pinoy Edition” winner Larry Martin was arrested Tuesday afternoon in his house in Milaor, Camarines Sur, on warrant for his conviction as accessory in a homicide case two years ago.

The warrant of arrest was issued by Judge Leo Intia of Regional Trial Court branch 27.

Court records showed Martin was convicted for driving the getaway car his cousin, Faustino Galvan, used to escape after punching to death court sheriff Rommel Licmoan in a brawl in a restaurant bar in Naga City in September 2012.

Galvan was immediately arrested after the fatal attack as the primary suspect and was later convicted of homicide. He has been serving his sentence at the Naga City District Jail.

Martin was detained at the Naga City District Jail. He will serve three months to three years in jail.