It could have been just one of the thousands of harrowing “Yolanda” stories told with every anniversary of the calamity (Nov. 8) and forgotten the rest of the year. However, two young filmmakers from Leyte were determined to not let the tale be forgottten, of Nick Quieta and his wife Chai, who lost 17 relatives, including their four children, in the supertyphoon last year. 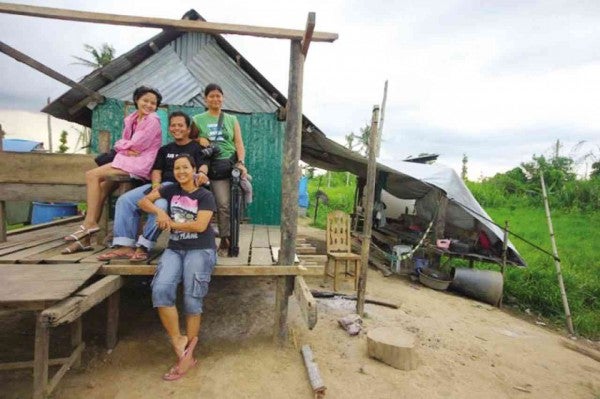 FILMMAKERS Wena Sanchez (left) and Cha Escala visit survivors Nick and Chai Quieta (center), in Tanauan, Leyte. The supertyphoon killed all of the couple’s four children, plus about a dozen relatives.

University of the Philippines Film Institute alumnae Cha Escala and Wena Sanchez thus made “Nick and Chai,” a documentary that chronicles the Quietas’ story of heartbreak and hope. “We recorded their day-to-day struggle from March to September,” the filmmakers said. The Quietas are agriculturists from Tanauan, Leyte.

A few weeks after “Yolanda,” Sanchez went home to check on her own family in Leyte. “My sister-in-law, a close friend [of the couple’s] told me about them.”

Her initial meeting with the Quietas was life-altering, Sanchez said. “They were cheerfully preparing dinner—Kuya Nick was chopping vegetables; Ate Chai, cleaning the fish.”

It might have been a normal evening in any Filipino household—except that four children, aged 1 to 11, used to live there.

Sanchez related that the couple talked and smiled a lot while they all had supper. “They seemed to overflow with love. I thought maybe they had [redirected] their affection for the kids to their neighbors, pets and each other.”

Escala added, “I learned a lot just being with them. Kuya Nick said, ‘We congratulate, instead of condole with, one another because we are still here trying to survive.’ That hit me hard because I tend to be pessimistic.”

The Quietas unwittingly taught the first-time documentarians gratitude and perseverance, virtues they would need throughout the challenging six-month shoot.

“Technical problems got in the way of the storytelling, which was the priority,” Escala said. For instance, Sanchez recalled, “The Quietas live near a highway, resulting in bad audio.” They thought of asking the couple to wear lapel mics, but decided that it would be invasive and insensitive. It was a delicate balancing act. “We were constantly putting ourselves in their shoes, asking, for instance, ‘Do I want to be filmed while crying?’” 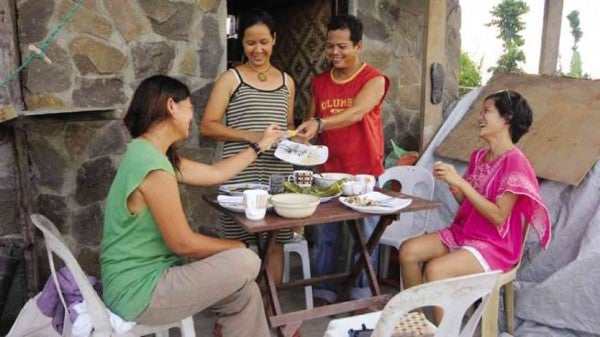 CHAI and Nick Quieta (center) share a meal with filmmakers Cha Escala (left) and Wena Sanchez. The docu will be screened tomorrow at the QC International Film Festival in TriNoma.

At one point, the filmmakers found themselves weeping, too. “We stopped asking questions and just hugged them,” Sanchez said.

“Nick and Chai” premiered at the Busan International Film Festival last month. “The screenings we attended were both full houses,” Escala said. “We heard sobbing [but] some viewers thanked us later.” And many asked about the Quietas’ present situation.

The docu had its Philippine premiere at the Quezon City International Film Festival Saturday. Another screening is set 2:30 p.m. tomorrow (Monday) at TriNoma. (Busan and the Quezon City fest helped fund the film, along with the filmmakers’ friend, Leizyl Badion.)

A European premiere is set at the International Documentary Film Festival Amsterdam, Nov. 19 to 30. They have been invited to several other foreign fests, but Sanchez and Escala hope to hold more local screenings.

To answer a Busan viewer’s question: “We are saving up for a trip within Southeast Asia with them. [Meanwhile, they] still teach farming techniques to farmers in their small town and visit their children’s graves daily.”