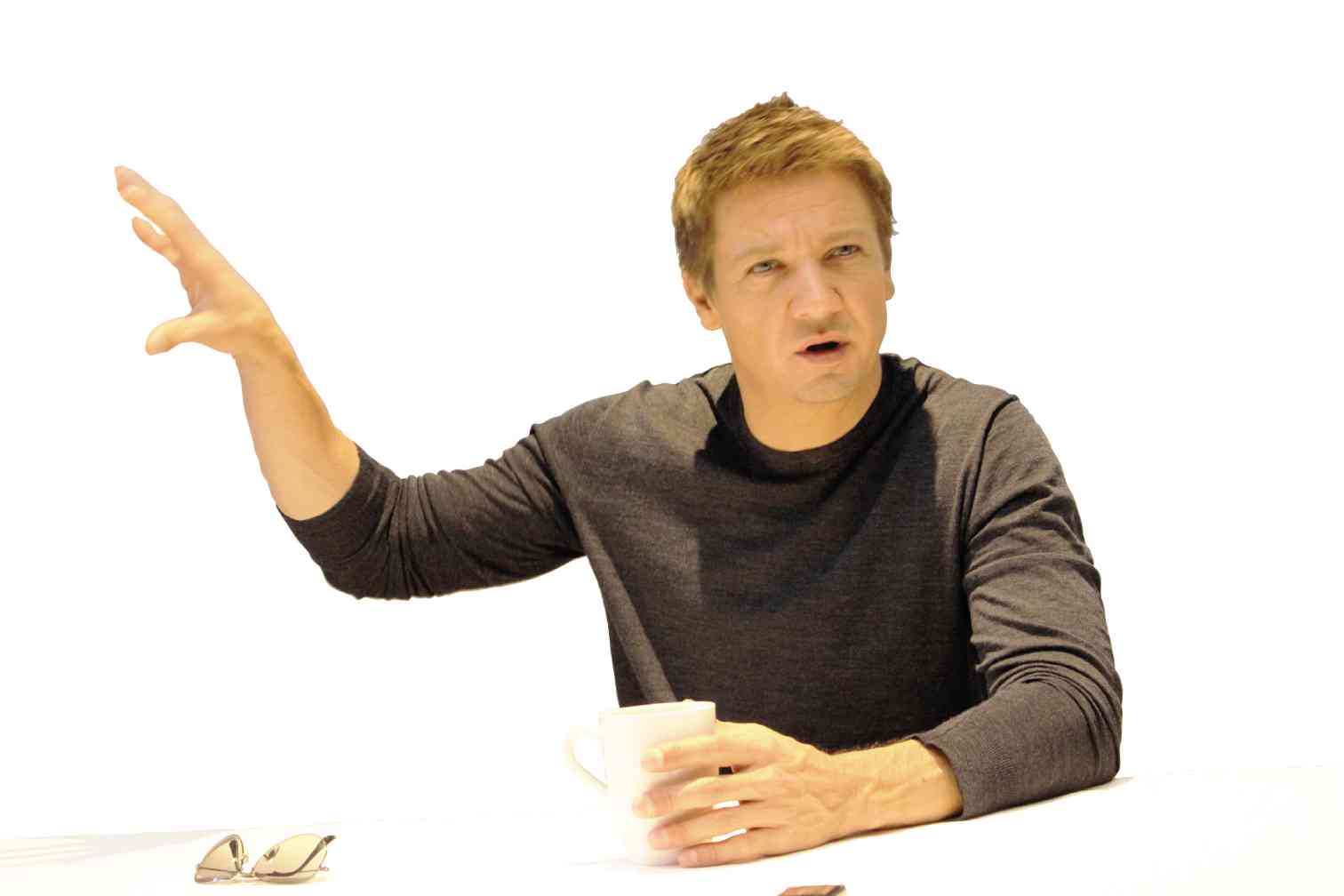 LOS ANGELES—Talk about a new “Bourne” movie for Jeremy Renner led to his funny and quite moving reminiscence of shooting “The Bourne Legacy” in the Philippines. But first, he clarified that, yes, there are two “Bourne” movies moving forward. Jeremy reprises his Aaron Cross role in “The Bourne Betrayal,” reportedly to be directed by Justin Lin, who is also one of the producers along with Paul Greengrass and Frank Marshall.

Matt Damon will be back as Jason Bourne in an untitled project that will reportedly reunite him with Paul in the director’s chair.

“I am sure both of those balls are still juggling—of an Aaron Cross movie and a Jason Bourne movie,” Jeremy said. He joked, referring to a 2003 slasher horror film, “Ultimately, it will be a ‘Freddy vs. Jason’ kind of thing.” 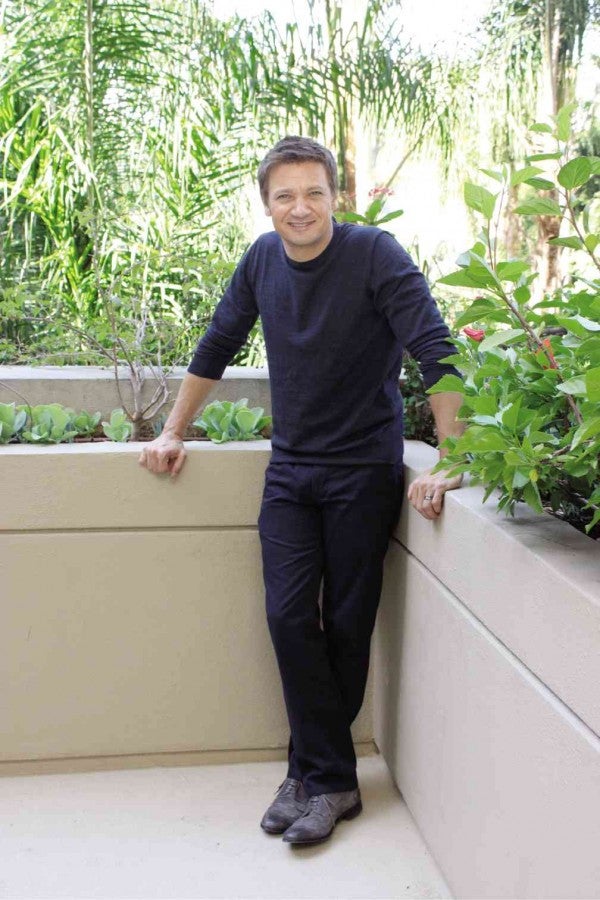 RENNER, left, was in a light mood throughout this interview.

Dressed in a wool shirt and slacks, Jeremy was in a light mood. He talked about Ava Berlin who, he said, is 19 months old, his daughter with wife Sonni Pacheco, a Canadian model.

In his new film, Michael Cuesta’s “Kill the Messenger,” Jeremy plays Pulitzer Prize-winning journalist Gary Webb, who became the target of a smear campaign when he tied the CIA to a scheme to arm Nicaragua’s Contra rebels and import cocaine into California. The crime-drama was written by Peter Landesman based on Gary’s “Dark Alliance” books and Nick Schou’s “Kill the Messenger.”

In December 2004, Gary, who worked for the San Jose Mercury News, was found dead from two gunshot wounds to the head. Authorities declared it a suicide.

It has been two years since you filmed “The Bourne Legacy” in Manila. What memories stand out about that experience?

We got to shoot around some of the 7,000 [plus] islands. We went to four or five of them. Those are probably some of the most beautiful, exotic places I have ever been on the planet. My takeaway from Manila was the extreme poverty versus how well-off it is. But no matter where someone is at—and there’s extreme poverty there, which breaks my heart—everyone is smiling.

It did break my heart seeing some very poor kids playing in very poor conditions with these 2 yards of watering hose. They just sat there for 45 minutes making different things with it. It was amazing to watch. So, again, my takeaway was about the people, not so much the place, which was a really lovely experience.

Can you talk a bit about “The Avengers: Age of Ultron”?

I am shooting a bow and arrow and I am chasing bad guys (laughs). You know I can’t tell you much about that. But what I can tell you about the next “Avengers” is that it has everything I liked about the first one, which is, it does not take itself too seriously.

And then there’s serious action when it’s needed. There’s a lot more of us together as a group, which is a lot of fun. There are some good guys on the team and also some baddies who hate us. It’s going to be great, man. It’s going to be big.

Any update on “Mission: Impossible 5”?

Yeah, we are doing it right now. We are in the middle of production. We have shot in Africa, Morocco and Vienna. And now in London for the rest of the year. So I go back next week to do more stuff.

In this film, “Kill the Messengers,” you play a loving husband and father. How are you as a family man in real life?

I am a father, yes, but I couldn’t draw upon that in playing a man with a 16-year-old son. I am the oldest of seven kids—that’s what I drew on. I do have brothers and sisters around that age. I drew upon my experience with having a lot of younger siblings in playing Gary Webb as a father.
What kind of a father are you?

I am an amazing father (laughs).

He’s tremendous. He is my mentor, friend and confidant. He’s much more than my father—he’s a wonderful human. I am very lucky. 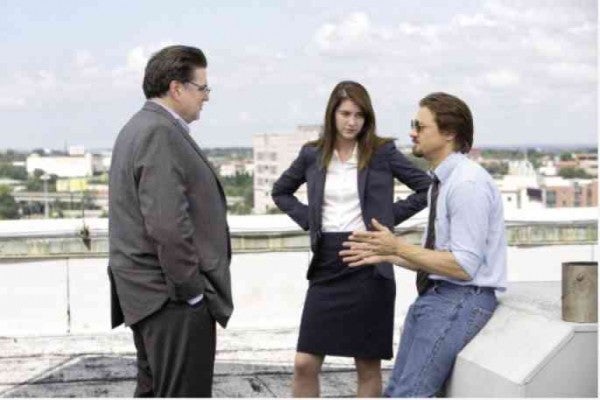 At right, with Oliver Platt and Mary Elizabeth Winstead in a scene from “Kill the Messenger.”

How has having a daughter changed you?

I can speak about it as being the most important thing in my life. She really taught me what true, unconditional love is. She sort of saved me from myself, from my own selfishness as a tortured artist and actor, and all of these certain things.

This little girl is going to be her own thing. I am going to support her, allow her to fail and to succeed. Every day, I am going to challenge her. It’s the greatest gift. This morning, I had breakfast with her. No matter how busy I am, I make sure I get morning and evening times with her. I can’t spend all day with her all the time.

I would love to stop making movies and just spend all day, every day, with her but she would probably hate me or get sick of me. But I really enjoy the lessons that she teaches me. I am excited about challenging her and exposing her to lots of new things.

How is the Steve McQueen biopic project that you are developing coming along?

There’s no date yet. We are still in development, trying to figure out some things, getting the script right because it’s tricky. It hasn’t been done and there’s a reason for that. Biopics are always a bit tricky. We want to do it and spend a bit more time to get it right.

James Gray turned in an amazing draft. That got us on the right road. We are going to move forward with it at some point. But I feel like, age-wise, I can wait for a couple of years more, and it will still be all right. But it’s something that I am really adamant about and I really want to do.

What’s the Steve McQueen film that you remember best?

“Bullitt.” It was the first movie I saw.

Was McQueen your icon when you were growing up?

That is actually why I want to tell the story—because my perception, initially, of an icon like, say Steve McQueen, and we have a handful of them in Hollywood—is that I want to understand who he is as a human. I look at these images and we can pick out 10 of them and go, “Oh yeah, Steve McQueen, king of cool.”

We all know about the jump but I want to get behind the scenes with a really interesting man. Steve is the biggest walking dichotomy and constantly an antithesis of himself. He was very generous and very stingy at the same time. I can go on and on with all those things. That’s what I want to explore—not the glossy images that we all see. I never met him. I have met some of his family. That’s the closest I have gotten to that. I really wanted to understand the human behind the icon.

Speaking of motorcycles, what was your first one?

My first one was a Honda Hurricane 600. I was like, 19. I started racing and I went off a cliff so I stopped riding motorcycles for a while. I got back maybe 10 years ago.

Were you injured in that cliff accident?

No, I wasn’t injured at all. I was fully leathered up and helmeted—the whole thing. I was riding through the mountains in Northern California and couldn’t make the turn. I hit a guard rail and I flipped off. I landed in a wasp’s nest, which actually kind of saved me. I climbed back up the hill, put my bike back together and I had to ride another 180 miles with pieces of my bike strapped to my back. 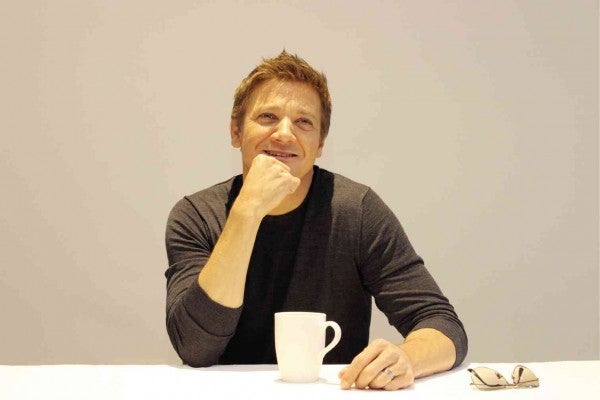 “I WOULD love to stop making movies and just spend all day, every day with my kid.”  RUBEN V. NEPALES

To research for “Kill the Messenger,” you watched home videos of Gary Webb and his family. What did that feel like?

I was a fly on the wall, essentially. I had wanted it that way because the family was very open in giving their time and effort with Nick’s book and with Peter Landesman’s script. I really didn’t want to kind of dive in. It’s a much more personal thing about playing a father or a husband. I didn’t want to dredge up any emotion [from the family] just so I can play a part.

They were sharing these really interesting videos. There was stuff online that I could look at, too—to capture his mannerisms, his essence, sense of humor. There’s a video of them at Christine’s (Webb’s daughter) birthday party, I think. She was 4 or 5 years old. They were just laying around, talking like families do, over cake, playing hockey, just normal. The stuff online was of him reporting and on news channels. There was a lot of stuff for me to grab on to.

Did you meet the family?

Yes but not till the end of the shooting. I didn’t want to bring up or unearth any feelings that I didn’t need to. They were already very open and giving with Peter and Nick as well. So I felt like I didn’t need to go in there and dig up any further, like maybe ask the kids what their father was like. Out of respect for them, I felt that, if I could get the information that I needed [in other ways], I would do it that way.

So I met the family on the last week of shooting, It was very surreal, queer, perverse, odd, amazing, lovely and vulnerable—there were a lot of things—just meeting them. We got to chat a bit over time now since the movie has come out. They feel like my family in a lot of ways—they are Northern Californian. They are from an area where I am from, good salt of the earth kind of people.

I am crazy about all of them. They are really amazing. They sent me a lovely e-mail because I haven’t talked to them for a while. They saw the movie and they were pretty emotionally affected by it, in a very good way. And that makes me very happy.

Have you seen “Birdman”? There’s a funny bit where your name is mentioned.