Mariah will always be their baby 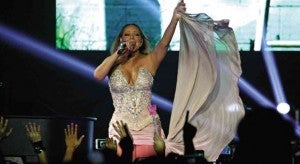 SHE WAS in control and fully confident, sassily strutting about and striking flirty poses, giving fans everything they trooped to the concert hall for.

Mariah Carey’s current Australasian tour, “The Elusive Chanteuse Show,” kicked off on a dour note, with pundits and concertgoers alike panning the pop-R&B star for flubbing lyrics, going off-key and bungling high notes during her Japan and Korea stops earlier this month.

While naysayers were itching to stick a fork in Carey’s music career, her faithful—whom she fondly calls “lambs”—were swift to defend her, saying that her recent separation from husband Nick Cannon probably put her under immense emotional and mental stress, rendering her unfit to go on the road.

It turns out, however, that the singer-songwriter’s struggles were nothing more than a case of rustiness. With each succeeding concert after that, Carey—who last toured extensively four years ago—steadily regained her footing.

By the time she took the SM Mall of Asia Arena on Tuesday, Carey had apparently recaptured the vocal control that is her signature as a world-class diva. 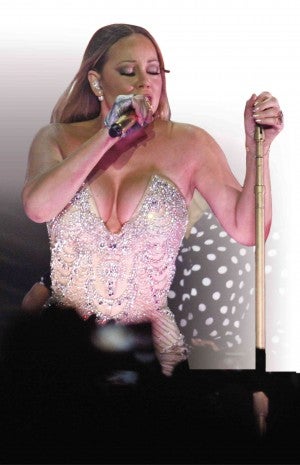 FANS stopped singing along when Mariah went for a high note.

The atmosphere was electric even before the lights were dimmed. Diehards huddled in clusters, chattering with unabated enthusiasm. Impersonators in colorful drag roamed the venue. Front and center, members of the local fan club wearing shirts that bore Carey’s image, giddily waved plastic sunflowers above their heads.

After the backup dancers’ opening routine to the tune of Bobby Womack’s “Across 110th Street,” the opening strains of the pop-dance bop “Fantasy” filled the air. At last, Carey—in a skimpy/sparkly dress that hugged her curves—materialized onstage, prompting the crowd, hysterical as it was, to crank up the decibels all the way to the ceiling.

Now on their feet, the “lambs” whipped out their cameras as the pop superstar gave perfunctory performances of “Touch My Body” and “Shake It Off.” Carey isn’t the most natural of dancing queens; she is a tad awkward, even clumsy at times.

But she looked confident that night, striking flirty poses and strutting sassily; her hands fluttered frantically like the wings of a hummingbird whenever she waved at the audience, paused to smile or fearlessly sustained a note.

The first real test followed soon enough: Her next number, the 1991 No. 1 hit, “Emotions,” is one of Carey’s most demanding songs, requiring her to hit notes at the very top of her vocal range. She belted it out in a lower key, but the vocals were solid. 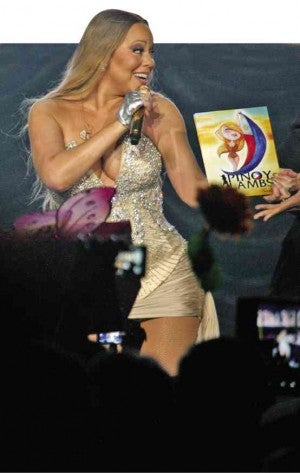 THE DIVA is warmly welcomed back by her Pinoy “lambs.”

“Intoxicated, flying high,” as the lyrics go, the packed crowd danced and sang along with Carey from the very first verse, stopping only at the exact moments she would unleash one airy whistle note—the better to hear it. “But I like the way I feel… insiiide!” Bedlam.

Carey did a decent job, too, tackling “My All.” A diminished chest voice prevented her from attacking the song as ferociously as it was intended to be, but she worked her way around her limitations by tweaking the phrasing and flourishing it with ad libs. And instead of going for a big climax, Carey syncopated and broke into a flurry of her trademark melismata.

In her vocal prime, back in the 1990s, Carey could do just about anything with her voice. Having an expansive range—reportedly five octaves—meant that she could dredge for smoky low notes and slay startlingly high ones. Her belting was effortless and ear-pleasingly resonant. Best of all, her vocal transitions were precise: She could hum, growl, whisper and back—easy-peasy.

While these aspects of Carey’s voice have understandably deteriorated with years of use, a quality that remains undiminished is its gorgeous tone, which she displayed in random and charming improvisations and in her reverent performance of “Fly Like a Bird.”

Her rendition of The Jackson 5’s “I’ll Be There,” was easily the night’s best—not only because it sounded great, but because her sense of fun and playfulness shone. The chemistry between Carey and longtime friend/backup singer Trey Lorenz was palpable, and they ended the duet with a delightful musical banter.

Though Carey, a five-time Grammy Award winner, sang live for the most part of the 18-song show, she did appear to be lipping over prerecorded vocals in her performances of “Cry,”

MARIAH magic at work: Can’t count her out just yet

“Supernatural,” “#Beautiful” and “Honey.” And just to nitpick, another lowlight of the concert were her lengthy, almost tedious, breaks for costume changes.

Nothing made a dent on anyone’s enjoyment, though. Carey sustained the momentum with “Meteorite,” from her moderately successful new album, “Me. I Am Mariah… The Elusive Chanteuse.” Juxtaposed to her next song, “Hero,” the disco groove of “Meteorite” was a stark contrast to the bombast of the slow-burning ballads that she used to do.

“Mahal kita, Manila! I hope I’m saying that right!” said Carey, who was last here in 2003. Midway through “Hero,” a fan gave her big a bouquet of flowers, which the songstress happily accepted. “I feel like a beauty queen!” she quipped, before proceeding with the song, which made devotees tear up. 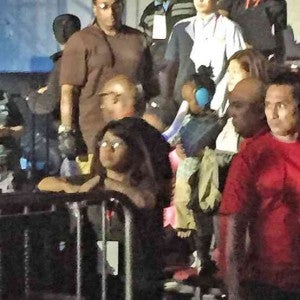 After dishing out one her biggest hits, “We Belong Together,” Carey sparked the evening’s loudest sing-along with her final number, “Always Be My Baby,” whose timelessness is a testament to the recording artist’s mettle as a songwriter and producer. Carey is tied with Elvis Presley with 18 No. 1 songs in the Billboard Hot 100 chart; only The Beatles have more, with 20.

Though her voice has become a fragile and fickle instrument, Carey proved in her Manila gig (mounted by Wilbros Live) that she can still deliver an enjoyable show of fine performances—not ’90s good, but still good enough to remind music fans that you can’t count her out just yet.