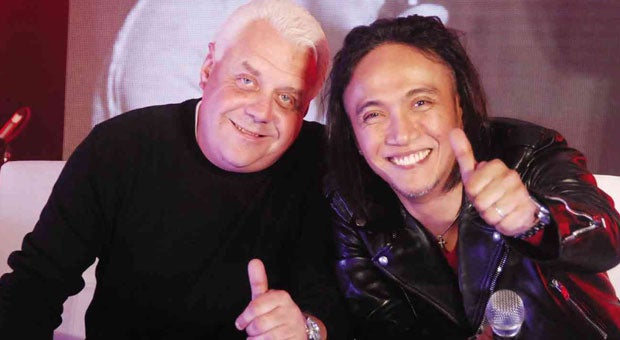 PINEDA (right) and Rene Walter are still “in negotiations” for the show’s TV airing.

Arnel Pineda knows how tough it is until now for aspiring local artists to get good breaks. The Pinoy rocker and Journey frontman is spearheading a reality talent search open to unsigned Asian bands, both professional and amateur.

“I started toying with the idea a couple of years ago. There are a lot of undiscovered world-class bands across Asia and we want to find them, help fulfill their dreams or at least give them initial exposure,” he told a group of reporters at a recent press conference.

“We’re still doing negotiations,” said the singer, whose earliest gigs included singing in a pizza parlor back in 1982.

Curiously enough, he himself was deathly scared of singing contests, Pineda revealed. He had to be coaxed by his father into competing. Extremely sensitive to criticism, he would never have, on his own, entered anything as big as “American Idol” or “The X Factor.”

“That takes serious guts,” said the 47-year-old rock star, who was discovered on YouTube by Journey lead guitarist Neal Schon. “I have tremendous respect for those who have that kind of courage. Imagine having so much confidence in your talent, only to be torn down by the likes of Simon Cowell.”

Rene Walter, Sanré chief executive officer, said the search will be open to all genres. Plus, the bands can use whatever instruments they want. “Age doesn’t matter either,” he added. “The public is not ignorant; they know what good music is.”

Online voting will determine the finalists. The Top 10 will be featured in a live face-off on television that will jump-start the program. (Pineda’s group is currently “in negotiations” with a TV station.)

Viewers will then vote for the Top 5 acts, which will be housed in a compound in the Philippines, a setup similar to that of “Pinoy Big Brother.” The bands will be shown practicing, playing and working on new material. They will also be given various “challenges” to accomplish.

The most exciting aspect of the competition, Walter pointed out, is that celebrity guest mentors and judges from around the world will be visiting from time to time.

“They will help the finalists become better songwriters, singers, instrumentalists and performers,” Walter said. “I can’t reveal who they are yet, but I’ll definitely reach out to the artists I represent or work with.”

Asked if he wasn’t concerned that the show’s reality TV component would overshadow music-making, Pineda told the Inquirer that more emphasis will be given to the creative process.

He elaborated: “Viewers will get to see how the band members collaborate, compromise and deal with each other’s egos.” His Journey band mates support the endeavor, he said.

The grand winner will get cash, a record contract and a management contract worth $1 million. “But no one’s going home empty-handed,” Walter said. “We will have the Top 10 bands record an album together and we plan to take the Top 5 on an Asian tour.”

While Pineda would be heavily involved in the show, touring with Journey would still be his top priority, he said, until the rock band’s planned hiatus after 2016. The Pinoy rocker is also working on a new solo album and a Christmas song collaboration with fellow Sanré talent, Serbian cellist Jelena Mihailovic.

Aside from these, a US film inspired by his life is on the drawing board, said Pineda, who revealed that he was earlier approached to be a judge on “The Voice Philippines.” His life on the road with Journey was featured in the 2012 documentary “Don’t Stop Believin’: Everyman’s Journey.”