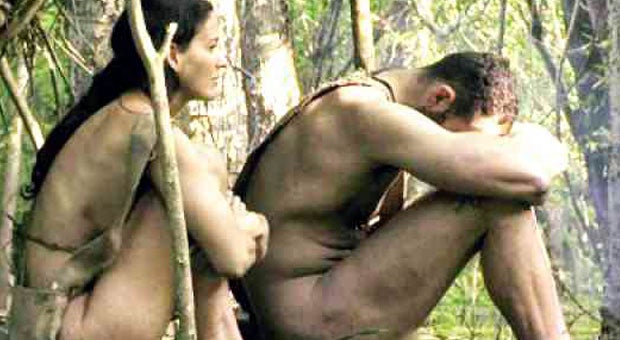 Viewers in countries with official censors or classification boards don’t get to watch completely nude TV shows, but that doesn’t mean they don’t exist.

Once, on a trip to the States, we visited a friend and found his family in the living room watching television and their TV set was tuned to one of the 500-plus channels that their TV service provided—and the channel they were on “just happened” to be a nude TV station!

That’s right, the “specialized” channel had a newscast, talk show and musical-variety program just like other TV outfits’ offerings—except that the performers and newscasters all didn’t have a stitch of clothing on!

We had watched with mouths agape as a news reporter, with the straightest of faces, talked about a news event in Washington as “professionally” as anybody’s business!

That was on a cable channel for limited viewing—but, don’t look now, even mainstream US TV is now “going naked” in a less exclusive and excluding way:

Currently generating a lot of buzz are docu survival challenges like “Naked and Afraid,” “Marooned” and “Naked Castaway.”

In those relatively more visually graphic shows, however, the participants’ privates are shaded, so no major harm to some viewers’ sensitive sensibilities is done. Besides, the survival shows aren’t just interested in nudity for nudity’s sake (although it’s presumed to be a conscious come-on), and offers insights into human nature and actions when castaways are forced to survive all by their lonesome, or at most in neo Adam-and-Eve pairs.

But, that’s just for starters: Now that “almost naked” TV reality shows have been accepted or at least tolerated by mainstream viewers, other producers are now pushing the envelope further by coming up with new shows like “The Naked Truth,” “Dating Naked” and such. One of them even featured a nude wedding in a recent telecast, with the entire wedding party and guests letting it all hang out!

The TV scene has become so furiously competitive that new shows need to be radically different to get a tumble from jaded viewers. Besides, volunteers a particularly bored observer of the TV scene, it all started many years ago, back to the first “Survivor” show, when the eventual winner, Richard Hatch, opted to do the entire series naked as a jaybird! So, why get shocked now?

Well, we may not be shocked as such, but we object to being so cheesily manipulated by TV people who cynically “play” us for all of the cheaply kneejerk animal instincts and impulses we have.

“Dating Naked”? You gotta be kidding. What significant additional knowledge can the nude daters get from letting it all hang out right from the get-go? Isn’t a little subtlety, nuance and mystery supposed to be part of the process of falling in love? In lust, even? There’s more to life than “honest” but actually cynically exploitative nudity!

Fact is, some participants in past naked shows on TV have belatedly expressed their remorse and regret for playing that cynical game, which did make them popular and/or notorious, but also trivialized their privacy and all-important sense of self-worth.