As we watched Denzel Washington’s exciting, “one-man-army” exploits in his latest starrer, “The Equalizer,” we found ourselves being swept along by the film’s pulsating tempo and extremely dangerous mission for its resident hero: To singlehandedly crush a powerful crime ring that controlled a veritable business empire of rackets all over the States.

It made billions of dollars annually and had even top cops in its employ, so cutting its hydra-heads off was—impossible! And yet, Washington’s character was able to do it all by his lonesome—and it’s only after the dust settles that we realize that we’ve just been taken on one heck of a fantasticating film ride! 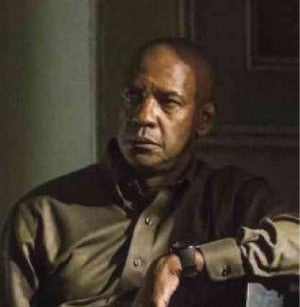 To make the cinematic “sleight of eye” even more textured, the villains are Russians who have wormed their way deeply into the underbelly of American crime.

In addition, Washington’s character is given an enigmatic back story that hints at great crime-busting expertise that he’s tried his best to completely forget.

However, he’s “forced” to deal with danger and death all over again, because a young victim of the Russian crime ring (Chloe Grace-Moretz) urgently needs his help.

In fact, our hero does much more than just avenge one of the ring’s victims—while he’s at it, he decides to strike at the heart of the entire crime syndicate itself, to give the American cops it had corrupted the liberating option of making up for their betrayal.

Can one man, no matter how brilliant and driven, do all that? Of course not. But, for 90 minutes of screen time, Washington and his starrer are able to achieve the wildly impossible. —No wonder there’s a move being initiated to tap him as the film world’s first black James Bond!

The Thai film, “Karma,” is about a lawyer who has “second sight,” or the ability to “witness” the otherwise usually unseen—which naturally gives him a big advantage in his profession and private life.

On the other hand, it can be a curse, because it involves him in some unsavory and even creepy experiences!

The lawyer’s latest case is a big car crash that involves a billionaire’s teenage daughter, a pair of newlyweds, and quite a number of other victims, including some mysterious individuals who end up missing from the scene of the multi-vehicle accident. Our hero is hired to defend the billionaire’s spoiled scion, who is being accused of wilfully initiating the tragic collision.

It turns out that the many people involved in the case, including the lawyer himself, weren’t linked to the crash just by chance: In fact, they were fated to converge at that critical moment, because the crash was meant to collect and pay huge karmic debts that involved all of them—in different combinations of relationships!

Like, for instance, it is belatedly revealed that the lawyer’s fiancée was a “living” ghost, and that the billionaire’s teenage daughter was actually adopted by him, and her birth father was in fact—the lawyer(?!).

The film was full of such psychic and paranormal twists and turns, but they were so awkward and speciously presented that what was supposed to be a weighty and provocative dramatic production ended up making viewers break out in giggles and titter!

As for the karmic theme, it was made inert and inutile by the storytelling’s gaffes, so the screening’s few viewers left the theater—in a blue funk!

Read Next
Meg Ryan’s insightful thoughts
EDITORS' PICK
Notice of 2020 regular meeting of stockholders June 18, 2020
SM prepares for ‘safe malling’
Leveling up your ‘lutong bahay’ with the kitchen companion you never knew you needed
NBI, Immigration to join hunt for ‘underground’ medical clinics
2 Chinese nationals arrested in raid on another unlicensed COVID-19 hospital in Pampanga
P2.2 trillion in losses: Cost of COVID-19 impact on PH economy
MOST READ
Revillame tells Roque: ABS-CBN is in my heart despite being in rival network
NCR is ready for GCQ — Palace
LOOK: Robredo, Vico Sotto, check Community Mart ops in Pasig
Año: Quarantine passes not needed in GCQ, movement restricted to essential travel
Don't miss out on the latest news and information.