Keanu and the art of motorcycle maintenance 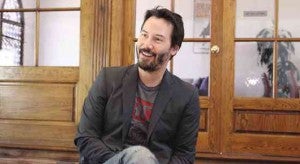 KEANU Reeves was in a great mood during this chat. photo by Ruben V. Nepales

LOS ANGELES—Keanu Reeves’ passion for motorcycles inspired him to start his own motorcycle company.

“I partnered with this motorcycle company called Arch Motorcycle,” announced the actor in a recent morning chat in West Hollywood.

Wearing a gray jacket and tee with ripped jeans, Keanu was in the best mood we’ve seen. He laughed heartily and even played air guitar at one point.

“We started selling motorcycles about six weeks ago. You can see what they look like on archmotorycle.com. They’re really fantastic,” he said.

“We make custom motorcycles,” said the actor, who’s usually quiet and reticent. In this chat, he was cheerful throughout. “It’s been two and a half years in development,” he said of the

Los Angeles-based Arch Motorcycle, which he cofounded with Gard Hollinger. “The motorcycles are ready to go out there into the world. It’s cool.”

“I’ve had the chance to ride so many bikes,” Keanu said. “I would say my favorites are the Norton Commando and the Arch motorcycle. We’ve designed a really cool bike.” He has one Norton race bike and three regular Nortons.

“I learned how to ride a motorcycle in Germany,” he recalled. “When I came back to Los Angeles, I got a bike and the first rides that I took were on Sunset Boulevard to PCH (Pacific Coast Highway) and then back. That was a circuit. It was Sunset, PCH, Mulholland and Laurel Canyon. That was a nice ride.”

Smiling, he rhapsodized, “Over the years, I remember a wonderful ride in France—Napoleon Road (Route Napoleon). I’ve had some nice rides in northern Australia, out in Cairns—extraordinary. And I did some rides on the East Coast of the United States that were cool through Massachusetts. Also the bottom of the coast of San Francisco.”

“The great trips in France and Australia were with friends,” he said. “On the Sunset/PCH, I was alone. With friends, we’d go up to the Angeles Crest Highway (California).”

Does he share a motorcycle ride with a girlfriend? “I don’t do that!” he exclaimed. “I’ve been working so I haven’t really had much time for amore. But it’s just been nice. When you’re away so much, it’s nice to come home and catch up with friends and family. Turning 50 and having that event and spending time with friends—it’s been nice.”

Complimented for looking young at 50 (he celebrated the milestone on Sept. 2), he replied, “When I’m working, I’m very disciplined. When I’m not working, I’m not so disciplined. I’ll just thank my ancestors.” Keanu’s Hawaiian-Chinese-European heritage contributes to his youthful good looks.

Keanu remarked that bikes and several other things were his few favorite material possessions. “I have a great affinity for the motorcycles I have and some of the things I’ve gotten over the years from different films—including scripts. I have a couple of typewriters that I like. I have a couple of suits that are my favorites. And photographs of friends and experiences. And the work—some of the films I’ve done in the past.”

Asked for an update on Dogstar, his alt-rock band, Keanu had some promising news: “The band is still broken up after all these years. We jammed a few weeks ago for the first time, which was weird but enjoyable. It’s almost like getting to know someone whom you’ve known. We played some old Dogstar songs and that was okay. We tried to write a little bit. We drank wine and more wine and played a little more. So it was nice but I don’t know what will happen.”

So maybe a reunion tour and recording are possibilities? “It’s like one of those things—maybe, maybe not,” he answered.

Maybe with more wine…? “That will be a decision made in the clear light of day,” he said with an enigmatic grin. 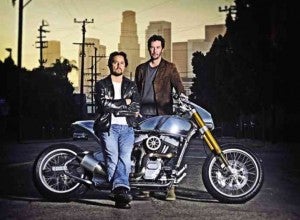 In his new film “John Wick,” directed by Chad Stahelski and David Leitch and produced by Eva Longoria, Keanu has the title role of a former hitman who comes out of retirement to hunt the gangsters who took everything from him.

That John Wick kills a lot of bad guys is an understatement. “The directors tell me it’s over 70,” Keanu volunteered. “They think John Wick is in the top six of solo kills in a film. We’re not like number one or two.” With a wry grin, he quipped, “John Wick is busy.”

“I don’t have much John Wick in me so maybe that’s why it’s nice to play the guy,” he said. “He’s got a certain power that I don’t.”

He claimed to be as romantic as John Wick. “If you ask my friends, they’d say that I’m playful. And romantic (laughs).”

When Keanu’s back is against the wall, like John Wick, who does he call? “That thought actually went through my head, too,” he replied. “Who do I call? It depends on the situation. Sometimes it’s your family … your friends … lawyer and sometimes, it’s the police.”

He said, “I don’t really know any hitmen and I don’t know any real thieves.” He added with a smile, “But I do know a couple of studio executives. They have a tough job. ”

Seen recently at the Los Angeles International Airport, where he stayed cool even as he was hounded by the paparazzi, Keanu was asked how he dealt with photographers who stalked him. He joked, “Kung fu.”

“It depends on how physically ready you are,” he said. “If you’re kind of in your own world and then all of a sudden someone pops into your frame … it’s startling sometimes.. It’s never fun. I just wish they’d get another job.

Keanu continued with a chuckle, “Maybe there’s that Zen part of it. You don’t want to be too disturbed by it but you also don’t want to accept it.”

On his recently completed films, he said, “The last film I did was with Courtney Hunt, who directed ‘Frozen River.’ It’s a courtroom drama called ‘The Whole Truth’ where no one was telling the truth. It was great. It had Renee Zellweger and Jim Belushi. Also with Gugu Mbatha-Raw, who is fantastic. It was a wonderful cast. I played a defense attorney who was defending a 16-year-old boy who killed his father and then it got very complicated.”

“Who is his dad?” he added. “And his mother? And then his wife? Who really killed the guy? It’s a whodunit. Courtney was fantastic. We shot that out in New Orleans. So that was cool… I mean hot.”

“And then I was in Santiago, Chile with Eli Roth shooting a home invasion movie called ‘Knock Knock,’ ” he said. “This architect—a family man—is alone on a weekend. His family has gone away to a beach house and he’s working late at night. It’s raining. Knock knock (knocks on the table). And these two young girls are at the door all dressed up for a party and go, ‘We’re lost, sir!’ They come into the house and seduce me. I say yes. I wake up in the morning and they haven’t left. It turns into this psychological and physical torture. And they exact revenge.”

In last year’s “Man of Tai Chi,” he tapped Indonesian actor, martial artist and fight choreographer Iko Uwais. “Yeah, he said yes to a sequence where we did Tai Chi which was very cool. He did great things.”

“If I didn’t do ‘The Matrix,’ I’m not working with Chad and David on ‘John Wick,’” he admitted. “That’s where I met Chad, who doubled as Neo, so we were forced into the fire with the Wachowskis. ”

“When I was a kid, I always enjoyed fake fights and playing war and when we’d do theater, it was always sword fights,” he added.

“In a weird way, it kind of means that the first film is a classic, which is cool,” Keanu said. “When you remake something, I guess in a way you’re kind of taking something that was a really enjoyable story and this particular time is when you make it your own, like we do with Shakespeare (laughs), classical music and films.”

To the cast and crew behind the “Point Break” update, he said, “I wish them all the best. I hope they make a good film and that they have a good time making it.”

“Bill & Ted’s Excellent Adventure,” where he played Ted “Theodore” Logan, is celebrating its 25th anniversary this year. A third installment is gaining momentum.

“Yeah,” Keanu confirmed. “The writers wrote a script and then they did a couple of other drafts. They’re trying to get the rights. The script is great. (Costar) Alex Winter wants to do it. I want to do it but the story has to be right. So they’re trying to put all the pieces together and it’s a great idea. So the guys… who would write the song with music that would save the world—it hasn’t happened.

“So the kids have grown up and they’re ignoring their wives and their families. They’re like, ‘Dude, we have to write this song.’ It’s kind of ruined their lives and so they go into their past 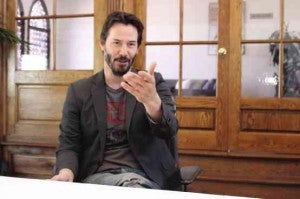 selves and their future selves to find out if they ever wrote the song. There are high jinks. It’s about mortality and family.”

He will also star in the drama “Daughter of God” and “Rain,” a TV action-thriller miniseries.

Keanu said he had no regrets. “Looking back, I feel really fortunate to have been able to work as an actor, to have that life and to participate in many films that I love and people enjoy.

“I left Toronto in 1985 to work in Hollywood and be an actor. It’s been really cool to have that opportunity. Now, it’s still about just trying to find good roles and movies. It has changed but the passion, reason and hope to tell all kinds of stories stay the same.”