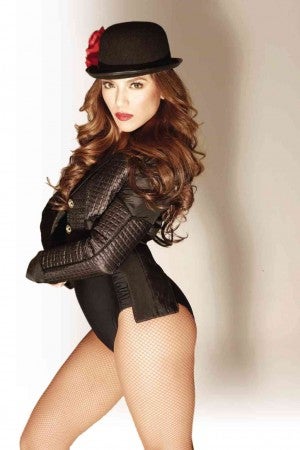 CIARA Sotto hopes to be half as good as her own mom.

Actress Ciara Sotto, who plays a battered girlfriend in the Carlos Siguion-Reyna movie “Hari ng Tondo,” said she was not aware that she was pregnant during the filming of the domestic abuse scenes with costar Gian Magdangal.

“A lot was required of me physically. Gian and I had to rehearse our scenes over 10 times. I got bruised badly,” said Sotto, who is now four months in the way. “Direk Carlitos is a perfectionist. Aside from the rehearsals, he made us do 10 takes for one scene.”

Had they known of her delicate condition, Sotto said she was sure Siguion-Reyna and the screenwriter (and his wife) Bibeth Orteza would not have offered her the role.

“Gian and I are happy with the finished product. It’s a good experience. As actors, we gave our all,” Sotto said. “I’m very proud of this film. In the beginning, I felt insecure because of all the retakes. I later found out that that was Direk Carlitos’ process.”

Sotto was also one of five finalists in TV5’s “Celebrity Dance Battle” that ended in June. “I had to do a lot of lifts and stunts with my partner. We also had to rehearse every day. It was a good thing that nothing bad happened to the baby.”

Sotto, who is a pole dancing teacher, said the most difficult part about being pregnant was not being able to do the sport anymore. “It’s a big deal to me. It’s what I used to do every day. My students kept sending me messages saying they missed me,” she said. “Also, I was used to going to bed at 3 a.m. Now, I make sure to have enough sleep. I don’t (stay awake) beyond midnight.”

She added that her doctor had instructed her to go on a diet, as her family had a history of gestational diabetes.

Sotto said she was nervous about being a first-time mom. “I may be a cool aunt, but I’m not sure I’ll be one as a mom. I’ll probably be panicky. My wish is to be half as good as my own mom (Helen Gamboa).”

Gamboa was ecstatic when Sotto broke the news of her pregnancy. “I’ve been married for four years, so the baby is much-awaited.”

Asked for the latest on her cousin, singer-actress Sharon Cuneta, who admitted recently that she suffered from depression, Sotto said: “Ate Sharon was able to rise above it quickly. It was a case of mid-life crisis.”

Sotto said she was aware of what Cuneta went through and made sure she was there for her cousin. “I knew how depressed she got,” she recalled. “Every day, I sent her text messages to ask how she was doing. The family was also constantly asked for updates on our Tita Elaine (Cuneta’s mom), who is still in the hospital.”

Sotto added, “I can assure you that Ate Sharon is now in a good state. I was with her recently and she looked really good.”

Asked what Cuneta’s advice was to her, she said, “That I should avoid getting stressed.”