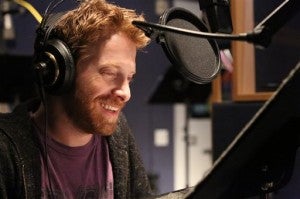 In this Sept. 2014 photo released by Nickelodeon, actor Seth Green appears in a recording studio in Burbank, Calif. Green voices the character Leonardo on Season 3 of “Teenage Mutant Ninja Turtles” on Fridays at 8 p.m. AP

This actor-writer-producer-director is unrivaled for popping up all over the place. So why not here? After all, he’s the 40-year-old show-biz ace who, as a youngster, played Woody Allen’s childhood doppelganger in the 1987 film “Radio Days” and went on to appear in the “Austin Powers” spoofs. He co-created the Adult Swim sketch comedy series “Robot Chicken.” He voices Chris Griffin, the deranged teen on Fox’s animated hit “Family Guy.” He starred in the NBC sitcom “Dads” last season. His latest film, “The Identical,” opened last month.

Now, with the start of Season 3 of “Ninja Turtles” (Friday, 8 p.m. EDT, Nickelodeon), Green has claimed the job of voicing Leonardo, leader of this quartet of “heroes in a half shell” who go by the names of Renaissance artists.

Green brings a lifetime of devotion to the task. He has followed the Ninja Turtles franchise since its comic-book birth three decades ago. Turtle Power, he says, represents everything a kid loves: “brotherhood and friendship and justice and ninjas!”

But just as he has matured through the years, so has his perspective on the Turtles (which would spawn an empire of TV series, video games, toys and other merchandise, and feature films, including, of course, this summer’s live-action blockbuster).

“Early on, I related to Raphael, the wild one, or to Mikey, because he’s the childish one,” says Green. “But Leo is a really complicated character, because he is tasked with being the paternal figure for these brothers. He has a different level of responsibility, and I like being able to bring that kind of gravity to it.”

If he came to this shell game already steeped in the Turtles ethos, there was yet another reason why this seemed like a marriage made in heaven: the woman Green is married to. He explains that Clare Grant, his wife of four years, has long nurtured a secret crush on Leonardo. It’s a secret she confided by chance to a “Ninja Turtles” executive producer a while back, which, according to Green, may have set in motion his enlistment to step in for Jason Biggs, the voice of Leonardo for this animated series’ first two seasons.

So, to sum up: Green now gets to fulfill a lifelong dream while also bringing to life his wife’s fantasy heartthrob.

“Thank goodness for her hilarious romantic proclivities,” he says with a laugh.

Of course, “Ninja Turtles” is far from the sole item on his to-do list. He continues with “Family Guy.” In December, he begins work on a new season of “Robot Chicken.” And he’s developing a film project that he hopes to direct, which led to his holing up in a Las Vegas hotel not long ago to pound out a script.

“I’m not interested in gambling,” he declares, “but Vegas is the only place in the continental United States where you can lock your door for days and nobody worries about you. It’s a really great place to get work done.”

Green, who is shortish with red hair and an impish smile, learned at a tender age to be a self-starter. Growing up in Philadelphia, he found his passions didn’t mesh with his peers’.

“No one in my school wanted to sing and dance and be on TV,” he recalls. “They all wanted to fix cars and play sports.” 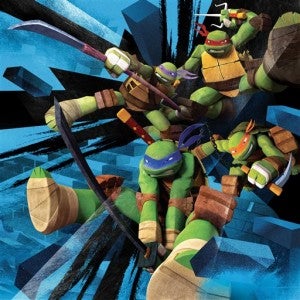 Even so, he landed his first role at 7. But all too soon he began to realize he didn’t look like the little kid from “Radio Days.”

“I had to redefine myself. And I knew I wasn’t going to be the prototypical handsome male lead. So I grew my hair out long and dressed a little more offbeat, and spent the next 10 years playing the best friend of the handsome guy. Or an affable stoner.”

Meanwhile, his zeal for pop culture drove self-generated projects like “Robot Chicken,” which since 2005 has lampooned the vagaries of pop culture with its kookie cast of stop-motion-animated action figures.

As Green’s roundabout career continued to flourish, he found a partner in pop-culture crime in his wife, Clare, an actress whose credits include not only on-screen roles but also voicing animation, including “Robot Chicken.”

Case in point: The August afternoon she phoned Green at his office and asked how soon he could get away.

“She had already bought tickets online for the matinee two hours later of ‘Teenage Mutant Ninja Turtles,’ the day it opened,” says Green, glowing from the memory. “THAT’S who I married!”