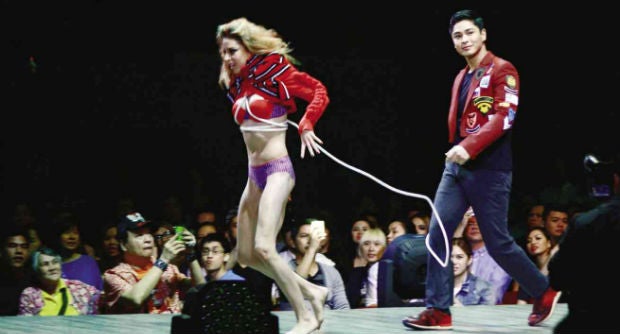 TAMED AND SHAMED Coco Martin and his “catty” companion’s controversial turn on the ramp that sent critics pawing at the celebrity and the fashion show’s organizers. INQUIRER FILE PHOTO

MANILA, Philippines–While actor Coco Martin has apologized for his controversial appearance at “The Naked Truth,” a recent fashion show that had him on the ramp with a scantily clad female acrobat on a leash, in a role that shattered his “boy-next-door” image and drew flak from women’s groups who found the image offensive, his talent manager disclosed that at least three companies endorsed by the celebrity had expressed reluctance to work with him again due to the fiasco.

In a press conference Tuesday, Martin’s talent manager Biboy Arboleda said he sought Kapunan’s help in explaining the actor’s side after learning that three companies had expressed their intention not to work with Martin anymore as a result of the incident. He declined to name the companies.

“We asked for Attorney Lorna (Kapunan’s) help because of the threat to Coco’s other sources of income,” Arboleda said. “Let’s not make this worse. We are determined to move forward.”

In the same press conference, Martin’s lawyer Lorna Kapunan conveyed her client’s apology but explained that he was not involved in conceptualizing the production and appeared only once for rehearsal a day prior to the Sept. 20 show.

Kapunan said Martin had wanted to “voice out his concern” during the rehearsals but failed to do so because of the “language barrier,” noting that most of the show’s production team members were foreigners.

Earlier this week, Ben Chan, owner of the clothing company Bench which held the show at Mall of Asia Arena, issued an apology saying it was never the firm’s intention to offend anyone through the fashion show, which mainly promoted Bench’s underwear line.

In a Sept. 28 post on Instagram, Chan also clarified that Martin was only asked to portray “a character in a circus scene”—a ring master who has tamed a big cat. “We apologize for offending the sensitivities of some persons. We assure you that we shall always endeavor to uphold the dignity of people.”

According to Kapunan, the actor “sincerely expresses his apology and requests the public for understanding. Martin equally feels bad about the incident and is saddened at the thought that he unwittingly offended the public…. (He) humbly asks for the public’s understanding and assures them that he will no longer participate in a similar insensitive portrayal.”

The lawyer pointed out that the female model, a member of a Canadian circus troupe, “chose to do the act. It is possible that under her contract with Bench, she’s required to do so.”

The lawyer noted that the controversial segment was “not consistent with Coco’s boy-next-door image. I talked with him over breakfast and understood why women see him as an icon… Coco did not have the slightest intention on his mind to insult women. He assures the public that he will no longer participate in a similar insensitive portrayal (of women).”

“This should be a reminder to Bench to take care of its artists in times of distress. The artists don’t have the means to defend themselves. Bench should help in talking to all of Coco’s sponsors because his contracts with them have morality clauses,” Kapunan said. “It will be a sad thing if a good person like Coco loses his endorsements because of the insensitivity of a company that did not come to his rescue.”