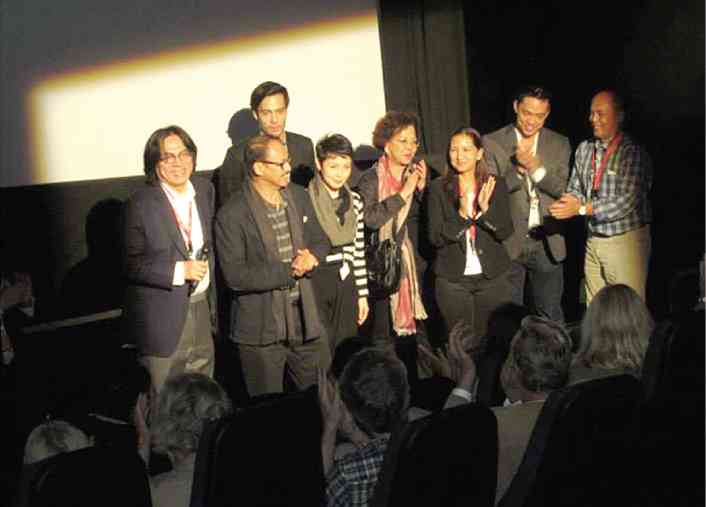 As Orteza later recalled, the apologetic text message had said: “I am not taking you for granted ha, Cris. You have a talent fee for this film.”

“Actually, when I accepted the project,” Cris admitted, “I didn’t know whether I was getting paid or not.”

She was more than happy to join the cast of “Hari ng Tondo,” her and her uncle’s big-screen comeback.

“Seeing the logo of Reyna Films (the family’s production company) on the big screen again after 14 years made me cry during the gala,” she recounted.

Reyna Films was established by her grandmother Armida Siguion-Reyna who, for three decades, endeavored to produce films that were “out of the box.” She said, “Reyna Films has always been known for producing films that go against the norm.”

Villonco’s only other movie before “Hari ng Tondo” was a Fernando Poe Jr. action flick, “Ang Dalubhasa,” in 2000.

Between acting with Da King and working in “Hari,” she finished school (Sarah Lawrence College in New York, liberal arts) and acted in several plays.

Villonco’s faith in “Hari” paid off big time. She not only won best supporting actress in the Directors’ Showcase section of Cinemalaya, the movie also took her all the way to the Toronto (Canada) International Film Festival last month. 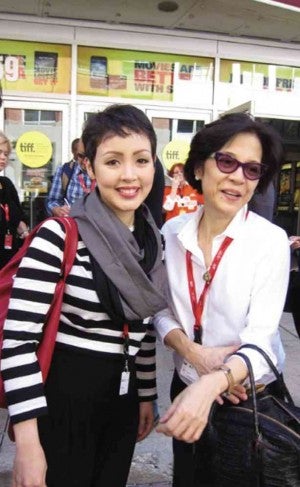 CRIS and mom Monique Villonco in Canada. She will give her trophy to mom.

She recalled: “It was interesting to observe people of different nationalities who watched the film there. We were nervous about some scenes that might be deemed politically incorrect, but audiences got the humor. They tried to be polite, but the Filipinos in the theater could not, and would not, stop laughing.”

Moreover, the audience members were quite inquisitive and wanted to know more about Tondo and the film, Villonco related. “They asked if we actually shot in Tondo. The other cast members got to spend more time there. I had only one scene in Tondo and I was in a car! When we said the film was finished in 12 days, the audience applauded.”

She noted, “Latin Americans took a special liking to our film … probably because of our shared values and traditions.”

She summed up her Toronto experience as “surreal.”

“We had a pictorial with Getty Images,” she gushed. At one point she found herself in the same room as Hollywood stars Jane Fonda, Jason Bateman, Connie Britton, Dax Shepard and Tina Fey.

While lining up for a screening, she heard a familiar voice nearby.

It was Sandra Oh.

“She sounded and looked just as intimidating as her character Cristina Yang on ‘Grey’s Anatomy,’” Villonco enthused.

In a forum she attended, the speaker was Oscar-winning actress Reese Witherspoon. “Such an intelligent woman! She had so much to share in that one-hour session. She is an inspiration to those who want to achieve more in their creative communities.”

Villonco is grateful for the experience: “I took away much more than I expected … there were over 300 films in that festival that were open to the press, industry people and the general public. We bumped into high-profile celebrities, indie artists, seasoned and noted filmmakers and foreign journalists and bloggers,” she said.

Once back home, she headed straight to work.

She plays a contravida in her first TV outing, the GMA 7 afternoon series “Ang Lihim ni Annasandra,” which debuts on Oct. 6.

She was nervous about facing the cameras again. “I didn’t know what to expect. I know what it’s like to be a has-been. It was as if I was given a new lease on life. That’s why I value these opportunities all the more.”

She is aware that, for television, she has to tone down her theater-honed acting skills. “Smaller gestures. More modulated voice. I am still getting used to seeing myself on the screen (big and small).” It’s all part of the never-ending learning process.

Where does she plan to display her Cinemalaya trophy (which is still being engraved)?

“I don’t usually keep my awards,” she replied. “My Gawad Buhay (best actress in a musical for “D’Wonder Twins of Boac”) went to my dad. Maybe the Cinemalaya trophy will go to my mom.”