‘Dementia’: Into the dark, racking realm of paranoia 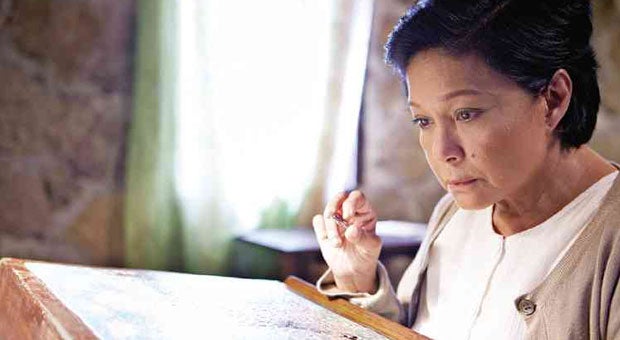 MANILA, Philippines—Filmed in ethereal color and yet imbued with a spine-chilling atmosphere, Percival Intalan’s “Dementia” successfully thrusts the viewers into the dark, racking realm of paranoia.

As Intalan’s directorial debut, it spares no one—the moment they step out the theater—from wondering about the malefic prospects if such cognitive impairment hits them over time.

The movie evidently swerves from old-hat, cut-and-dried storylines that many scary movies offer. It is apparent Intalan wants to evade this usual drawback by creating a grisly dramatic tableau painting the life of Mara Fabre (Nora Aunor), a semi-retired teacher that has been struggling with dementia.

The attempt to remedy her mental decay becomes the narrative dawn, the point that leads to the restitution of her weeping past.

And Batanes couldn’t be a better place of gloom.

The unadulterated and breath-taking landscape of the province welcomes Mara as she returns to her old house, with the help of her cousin, Elaine (Bing Loyzaga).

Elaine, together with her husband Rommel (Yul Servo) and daughter Rachel (Jasmine Curtis-Smith), takes the responsibility of attending to the needs of Mara, whose mind has become warped by a troubling infirmity.

“Dementia” is heart-wrenching poetry in picture. Its visual verses beguile the senses to absorb the character’s prosaic state, rhymed with its aural rhythms lulling the terror that looms ahead.

One might say that the film revolves much around Mara’s history, and that the other characters’ personal backgrounds are not explored. But it seems to be Intalan’s pure intention.

Mara’s homecoming triggers the unspooling of her dreadful memories. She starts to hallucinate, ecstatically following a miscreant little girl every time she sees the latter. At this point, she turns the delusion into reality; the apparition, unbeknownst to her, banefully portends an imminent danger.

Perhaps due to the time constraints, the focus on Mara is what the film only needs throughout its entire duration.

While “Dementia” gets short of narrative layers among its main characters, the revelation surrounding Mara’s past compensated for anything that lacks. The effectual brunt of her haunting memories is enough to rip the bones with crippling strength.

Servo’s confrontation with Aunor is short, and unnecessary. It surely tips off a bitter history between the two, but such isn’t completely explained. It just leaves the viewers in the doldrums, curious about a certain conflict that happened before.

The film could have developed more an additional speck of drama with that storyline. But still, Servo’s portrayal of an agitated, cranky father is quite convincing.

Loyzaga’s natural flair also adds up to the ominous thrill of the movie. Her calculated role spices up the heavy tension among the family, bolstering the main predicament up to the climax.

Despite her insipid lines and bored attitude on the early parts of the film, Jasmine Curtis-Smith as Rachel proves herself worthy as she becomes entangled in the maelstrom of events.

Curtis-Smith is able to make much of her nuanced act just in time when her character fully commits in the story.

Of course, the sterling performance of Nora Aunor never disappoints. Her personal tragedy serves as the leverage in which the diabolical mood of the film lies.

Even with only few dialogues, her deep visage projects the whole tapestry of her dim, fragile mind. At many instances, she effortlessly gesticulates Mara’s leanings and dispositions. Her abysmal eyes boldly shout her soul’s remorse, solitude, fear and throes altogether, especially on one particular scene at the cemetery.

Much can be said from Intalan’s exploit of Batanes’ sprawling terra firma, where steep boulders and cliffs provide a powerful dismal ambience for the film. Every earthy element was greatly captured—the swash of the billowing waves, the whoosh of the mournful wind, the hum of creatures hovering over the firmament.

With a baffling twist at the end, the film inadvertently posits itself as a subtle looking glass, where one can look through a person’s troubled brain.

“Dementia” may not be as solidly horrifying as it can be, but it does disturb the deep recesses of the psyche more than anything else.

An ‘A’ grade for ‘Dementia’