You may want to bring him bananas 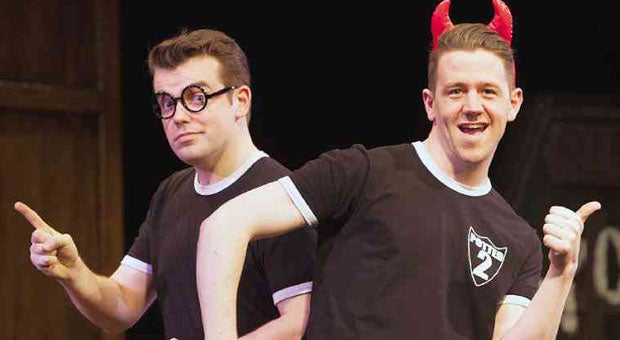 JAMES Percy, left, and Ben Stratton perform in Manila for the first time.

You’d probably want to bring him bananas, preferably local varieties that he never knew existed—saba, señorita, latundan. And make that before the show.

Bananas guarantee that Ben Stratton, one of only two actors in “Potted Potter,” whose much-anticipated third Manila cycle starts Tuesday, gets through all that manic running around written into his role(s).

“My job is to annoy James (Percy, coactor), that’s clear,” Ben told a handful of local journalists recently. “Whether I do it vocally or physically, it takes so much energy. That works for us—James playing it uptight and in control, and me just flying in all directions, literally. I sweat a lot, you’ve no idea; but so does James.”

Thus, the bananas. “I eat three before each show,” Ben said. “And sometimes we do three shows a day.”

For nine years, “Potted Potter” has taken on the challenge of condensing all seven Harry Potter books by J.K. Rowling (over 4,000 pages) into 70 minutes of hilarity.

Ben and James are both in Manila for the first time, fresh from September stints in Dubai, Singapore and Hong Kong.

When Ben sat down with the Philippine journalists, it was not with James, who was touring elsewhere at the time, but with one of two creators of “The Unauthorized Harry Experience,” Jefferson “Jeff” Turner (his cocreator is Daniel “Dan” Clarkson).

If this instant 55-minute press con was any indication, the stage goings-on will be uninhibited at its calmest. The banter never ended; it was a full-on show without sets.

The two actors onstage play multiple parts, from major to minor, including Albus and Wormtail. Asked which one was his favorite, Ben said, “Voldemort has got to be up there. It’s an homage to my favorite movie character as a kid, Merlin the Wizard in ‘The Sword and the Sorcerer.’”

Jeff seemed seriously stunned by that. “You ripped it off!” he shrieked. “I wondered where you were getting all that!”

Jeff and Dan used to be the actors in the play. Now they’re occupied with checking on touring teams. But Jeff made sure to find time to come here and see for himself why a third Manila

run in three years had spilled out of the “Potted” cauldron.

“Manila is the only place in Asia that we are playing more than twice,” he said. “We have individual Facebook fan pages for everywhere we perform. On the average, we get 600 ‘likes,’ maybe. Our Manila site has about 30,000! That’s more than we have on our ‘Potted Potter’ homepage.”

Ben gave his interviewers a mind-boggling sample of the mile-a-minute lines. After which, Jeff noted that the actors do adjust to suit various audiences’ profiles. The adjustments include one built-in aspect of the show: local references.

“During technical rehearsals, usually a day before opening,” Jeff said, “when the actors have time to be nosy, they usually talk to the local crew or staff, or anyone else they could get material from—the current headlines in sports, politics—that they can probably use.” (That would be today!)

Dan and Jeff created “Potted Potter” in 2005 as a PR gig for a London bookshop, a five-minute entertainment for fans awaiting the release of “Harry Potter and the Half-Blood Prince,” sixth in the series.

It has since grown into a full-length stage production, which has played 30 weeks off-Broadway and had five West End runs. This current world tour also includes Mexico, Ireland, Canada and Australia.

Presented in the Philippines by Potted Productions, Lunchbox Theatrical Productions and Concertus Manila, the play’s limited run (Sept. 30 to Oct. 5 at the Carlos P. Romulo Auditorium, RCBC Plaza, Makati) kicks off with a Harry Potter costume party (owls must be checked in at the entrance).

At the time of the interview, Jeff had not decided who he’d come as. (Maybe J.K. Rowling.) Ben could only think of the bananas. “I may never leave Manila,” he said.