MANILA, Philippines―Representatives from a women’s party-list plan to file a resolution in the House of Representatives to condemn the sale of a t-shirt allegedly promoting rape in a giant shopping mall chain and a scene in a fashion show where a male actor pulled a female model on a leash.

Representatives Luzviminda “Luz” Ilagan and Emerenciana “Emmi” De Jesus of the Gabriela Women’s Party-list said that they will file a House resolution urging the House Committee on Women and Gender Equality and the Committee on the Welfare of Children “to jointly investigate current government programs and agencies that monitor and enforce violations of laws that protect women and children committed by private parties such as shopping malls and event organizers.”

The Gabriela party-list representatives are referring to a t-shirt sold in the boy’s section of SM Department Store which states “It’s not rape. It’s a snuggle with a struggle” and a scene during the “The Naked Truth” fashion show of Bench clothing that showed actor Coco Martin pulling a female model on a leash.

The party-list representatives slammed SM for selling the t-shirt which trivializes rape and implies that “women are merely playing coy to men’s sexual advances”. 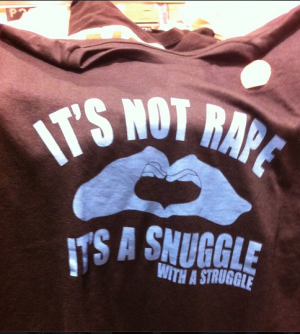 “The shopping mall had the gall to market that offending shirt in the boy’s section, and what message does this send to teen men about taking liberties with women? The managers of the mall should realize that exploiting this wrong message just to maximize profits can perpetuate anti-women attitudes and violent behavior,” De Jesus said in a statement.

Also, Gabriela said that the scene in the Bench fashion show was a “disturbing throwback to concepts of enslaving and subjugating women to male fantasies.”

On Tuesday, SM said that it had withdrawn stocks of the shirt from all its stores and launched an investigation on how it got into their inventory.

“We do not tolerate such action. SM does not support such irresponsible and malicious acts that mock important and sensitive social issues,” SM said in a statement.
Netizens expressed their outrage as a picture of the said offensive shirt made rounds in the social media.