Gary V. goes on a hot streak in US, New Zealand, Australia 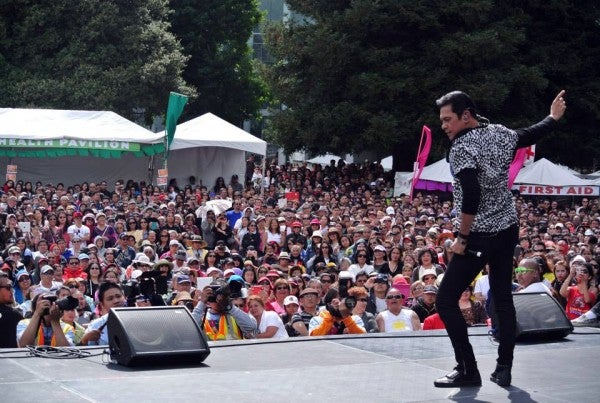 He has performed at the Mark J Ettes Hall, Trump Taj Mahal in Atlantic City, New Jersey on September 20. He then will go on stage at the Victory Convention Centre in Auckland, New Zealand on September 26 followed by a show at the Rosehill Gardens in Sydney, Australia on September 28.

Gary V has been touring the world since last year as the Ambassador of ABS-CBN’s The Filipino Channel (TFC) for its 20th anniversary celebrations.

After an explosive performance with son Gab in New York last year, Valenciano performed Toronto, San Francisco and London for TFC. He is set to visit Singapore, Saudi Arabia and Guam.

He received a standing ovation when he performed for over 25,000 people in London. He also staged a powerful five-city tour of Australia (Adelaide, Perth, Sydney, Melbourne, Brisbane) with son Paolo in July just before staging the successful repeat of his ARISE Gary V 3.0 concert franchise this year at SM MOA Arena. He filled up the Smart Araneta Coliseum for two nights in April before that.

Paolo and Gary received a trophy for co-directing the concert series, which won Best Concert of the Year at the recent 6th PMPC Star Awards at the Solaire Grand Ballroom.  Aside from receiving countless nominations that night, Gary also received three other awards for Best Male Recording Artist for his WITH YOU album as well as Best Male Star of the Night and Best Male Celebrity of the Night.

In the US, Valenciano sold out the Chumash Resort in Santa Barbara, California, and filled Harrah’s Rincon in San Diego, California last February.

For his concert “Gary V Live at the Taj Mahal,” Gary shared the stage with the same special guests headed by international super-selfie king Gab Valenciano, who recently graduated from Full Sail University with an associate’s degree in Recording Engineering. He also featured the best female quartet in the country, Top 10 of The X Factor Philippines and Top 3 for Showtime’s “Bida Kapamilya” for 2013, AKA JAM.  The group is composed of four talented ladies, Suklay Diva Katrina Velarde of the “Trenderas” soap opera, Monique Lualhati, Ashley Campbell and Jhelsea Flores. Acclaimed music producer/arranger Mon Faustino is the concert’s musical director.

Filipino fans around the world can look forward to seeing one of the country’s greatest artists perform his top hits live and in person.

In the course of over 30 years, Valenciano has produced and recorded countless hit songs that helped define the history of Pinoy pop culture. He has also inspired millions of people around the world as UNICEF’s Philippine National Ambassador for 15 years.

For more on Gary Valenciano, check www.manilagenesis.com  www.garyv.com and his Facebook site Gary Valenciano Official, as well as his Twitter site @GaryValenciano1 and @therealgaryv for Intragram.