‘The Maze Runner’ weaves way to top of box office 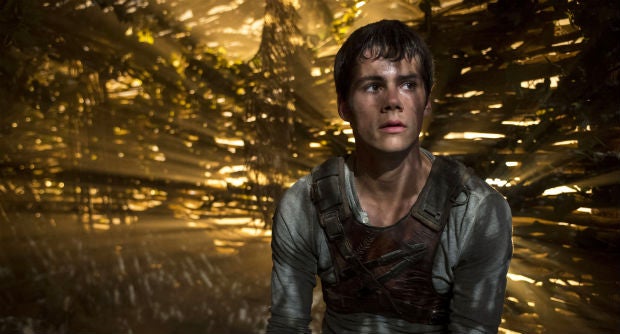 In this image released by 20th Century Fox, Dylan O’Brien appears in a scene from the film, “The Maze Runner.” AP

The Fox production, based on James Dashner’s best-selling 2007 young adult novel of the same name, is the latest studio offering depicting teenagers struggling for survival in a dystopian future society.

Like the blockbuster “Hunger Games” films, “The Maze Runner”, which stars Dylan O’Brien as a teenager trying to escape from a complex labyrinth, is part of a trilogy.

The Hollywood Reporter reported on Sunday that a 2015 date for a second film in the series had already been set following the movie’s successful opening weekend.

In second place was another new release, the Liam Neeson crime drama “A Walk Among the Tombstones,” which took in $13.1 million according to box office tracker Exhibitor Relations.

The movie, based on US crime writer Lawrence Block’s book of the same name, features “Taken” star Neeson as a former New York detective who is hired by a drug dealer to track down his wife’s murderer.

Another debut movie adapted from a book was in third, the comedy-drama “This Is Where I Leave You,” with $11.9 million.

The film, based on Jonathan Tropper’s 2009 book and starring an ensemble cast including Jason Bateman and Tina Fey, tells the story of four siblings who reunite at their childhood home after the death of their father.

In fourth place was “No Good Deed,” the thriller starring Idris Elba about a devoted wife and mother of two who innocently helps out a charming but dangerous escaped convict with devastating consequences.

The film, which has been hit with a slew of negative reviews, earned $10.2 million in its second week on release.

In sixth was the summer season’s most successful blockbuster, “Guardians of the Galaxy”, which added another $5.2 million to its eight-week haul, which now stands at $313.7 million in North America.

Screwball comedy “Let’s Be Cops” was seventh with $2.7 million, just ahead of “Teenage Mutant Ninja Turtles,” which added $2.65 million from Friday to Sunday to its total earnings, for $185 million.

In ninth place was “The Drop,” which tells the story of a bartender played by Tom Hardy who unwittingly finds himself at the center of a robbery gone wrong. The film, which also features late “Sopranos” star James Gandolfini in his final movie role, pulled in $2 million on its second weekend in theaters.