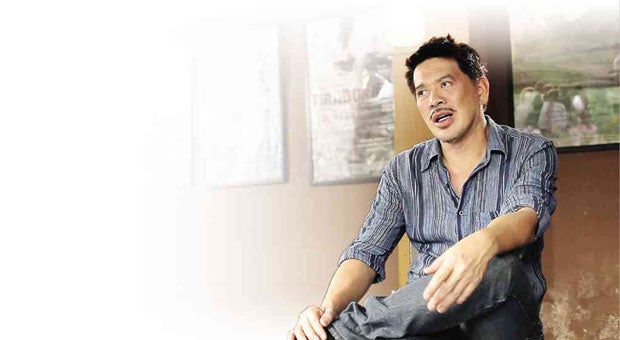 “Back in 2009, the Philippines’ Brillante Ma. Mendoza won Best Director for ‘Kinatay’ at the Cannes film fest. A year later, Thailand’s Apitchatpong Weerasethakul won the Palme D’Or for ‘Uncle Boonmee Who Can Recall His Past Lives’ at the Cannes as well,” Lombroso recounted in an e-mail interview with the Inquirer. “It piqued my interest. I wanted to know who these filmmakers were and what drove them to succeed.”

Three years ago, he started work on a docu on Southeast Asian cinema, by doing research on the four countries that he wanted to spotlight—the Philippines, Indonesia, Singapore and Thailand.

Lombroso’s first interviewee was Mendoza, who was in Rome for a film festival two years ago. The Italian documentarian likewise flew to Manila, to shoot additional scenes and interviews with Mendoza and other Filipinos that same year.

The shoot wrapped up in December last year, with an interview with Nugroho in his Yogyakarta home.

While finishing the docu, Singapore’s Anthony Chen won the Camera D’Or at Cannes for “Iloilo” last year, he recalled.

“This year, the Philippines’ Lav Diaz won the Golden Leopard at the Locarno fest,” he related. All these awards, he explained, support his findings that there is a cinematic “awakening” in the region.

Southeast Asian cinema, he acknowledged, “has a unique perception of reality—derived from its diverse cultures, traditions and religions.”

He pointed out that “humanity” is a common thread that binds the films in the region. Southeast Asians possess “strong spirituality in spite of difficult situations—

He described the region’s cinema as “primal…universal.”

Moreover, Southeast Asian cinema is distinguished for its “innovation,” he said,

“Southeast Asian filmmakers were among the first to take advantage of digital moviemaking,” he remarked. “They ran away with the technology which lowered the cost of production. Young aspiring directors made films, guerrilla style—usually with a small crew, minimum equipment and a short shooting schedule.”

These filmmakers “were not afraid to experiment,” he said, “resulting in greater artistic freedom.”

Slap on your face

He has also watched a number of films from the region. “I was lucky that ‘Kinatay’ was released on VOD (video-on-demand) in Italy,” he said. “I was astonished by its basic filmmaking style. Shot with a hand-held camera and low lighting, it’s almost like a home video, but with a lasting impact [on the viewer]…it’s like a slap on your face.”

He noted that Mendoza’s “film language is crafted organically…he tries not to interfere in the real situations that he is recreating onscreen. He reminds me of Italian screenwriter Cesare Zavattini who said ‘cinema should be the tail of reality.’”

After making the docu, he has “learned the power of ideas and the true spirit of ‘indie’ filmmaking…which is what cinema should be. Stripped of commercialism, cinema’s humanity thrives,” he said.

Coming full circle, his docu, titled “Southeast Asian Cinema: When the Rooster Crows,” will premiere at the Busan International Film Festival in South Korea next month.

His earlier docu “Through Korean Cinema,” the same film that led him to Southeast Asian movies, debuted at the Busan fest in 2010.

“It’s like a homecoming for me. I am very happy to be back in Busan,” he quipped. “I cannot find a better place to premiere…where else but in a festival that has launched and championed many Southeast Asian directors? This year, Busan will award grants to Brillante and Pen-Ek—and feature Indonesian, Cambodian, Vietnamese and Thai filmmakers.”

The “Rooster” in the title refers to the four Southeast Asian filmmakers that he featured in the docu. “A rooster crowing is a typical sound that you’ll hear in the morning everywhere in the region. The four filmmakers herald a new dawn…their endeavors and aspirations have inspired a younger generation of filmmakers to flourish in their respective countries.”