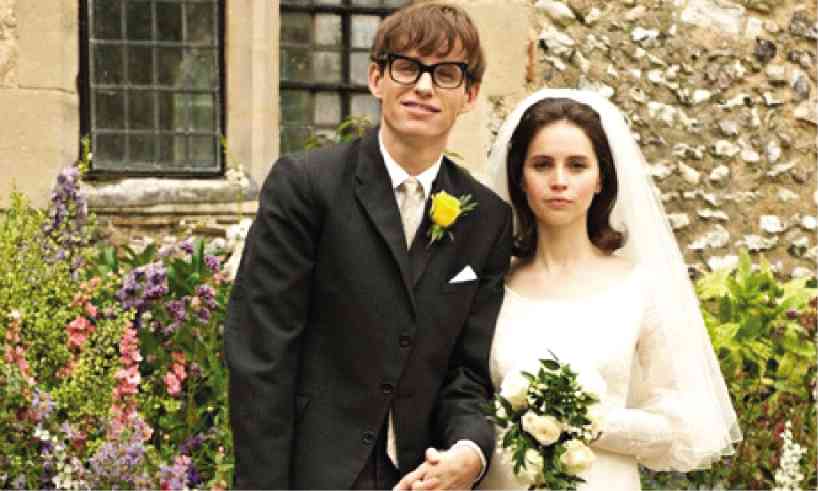 WHILE reading the script of “The Theory of Everything,” Redmayne, with Felicity Jones, discovered the extraordinary woman behind the icon. AP

LOS ANGELES—Stephen Hawking and Hannah Bagshawe are among the key people in Eddie Redmayne’s life and career these days. The actor plays the genius astrophysicist in “The Theory of Everything,” in an excellent performance that makes him one of the Best Actor race frontrunners. Hannah is the heartthrob’s fiancée, whom he reportedly plans to marry this winter.

The British actor talked about both during our interview at the Trump International Hotel and Tower in Toronto during the recent film festival there. Eddie, always a genial interviewee, was extra cheerful that morning, his freckled face beaming. He was probably buoyed by the kudos he was getting for his portrayal of Stephen in director James Marsh’s adaptation of Jane Hawking’s memoir, “Travelling to Infinity: My Life with Stephen.”

The film begins when Stephen and Jane (an equally impressive Felicity Jones) meet and fall in love as students at Cambridge. At 21, Stephen was diagnosed with a motor neuron disease that attacked his limbs, severely affecting his speech and movement. Eddie, often using just his eyes, eloquently expresses a wide range of emotions, from sadness, humiliation, hurt, rage to mirth—a lot of the latter as Stephen, despite his debilitating condition, never loses his sense of humor.

“I knew embarrassingly little about Stephen, particularly given that I actually went to Cambridge University,” admitted Eddie, casual in a layered look of leather jacket, denim shirt, tee, slim pants and sneakers. “I’d seen Stephen there and in the streets—an icon in the wheelchair. I even overheard his voice.”

Quipped the classically trained actor, a smile lighting up his face, “But I gave up science when I was 12 or 13. I studied History of Art, for which I apologized to Stephen when I met him the first time. When I read this script (by Anthony McCarten), it was an extraordinary revelation. I really had no idea that there was this incredibly uplifting, powerful—sometimes funny—story behind this icon, and that there was an extraordinary woman (Jane) behind him.”
Eddie (Marius in “Les Miserables”) relished his first meeting with one of the century’s greatest minds, at the latter’s Cambridge home. “That was five days before we started filming. I had spent five or six months reading and watching everything I could. He’d become quite an idol to me by then.” 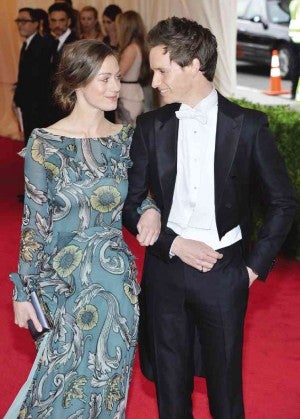 Again breaking into his boyish grin, Eddie continued, “As you know, I suffer from verbal diarrhea. I basically spent a good 35 minutes vomiting forth information about him to him, telling him about himself. He just sat there going, ‘Yeah, I know.’ But it was amazing, and he gave me so much on that first meeting. There was one slightly embarrassing moment when I was struggling to fill space because it takes him time to speak. I said, ‘You were born on the eighth of January, Galileo’s birthday.’ He made a big point that he was born 300 years after Galileo was born.”

Still smiling, Eddie carried on, “I said, ‘I was born on the sixth of January so we’re both Capricorns.’ Stephen looked at me and then spent a few minutes typing on his machine. In his iconic voice, he said, ‘I’m an astronomer, not as astrologer.’ I broke into this horrific sweat. Even now, I can still feel the sweat—the idea that Stephen [suspected] the guy playing him in the biopic thought he was a horoscope writer.”

The 32-year-old London native (full name: Edward John David Redmayne) talked about how he may have gotten the acting bug since, he stressed, “I don’t come from a theatrical family at all. But I’ve always had this weird thing about having been born on the night that my parents were going to see ‘Cats.’ My mom couldn’t go [because she was in labor], so my family always thought that my interest in theater came from that. Plus, my first-ever theater job was playing Viola in ‘Twelfth Night.’ It was the sixth of January; that was weird. And my first play after university was ‘The Goat’—Capricorn is the goat. I’ve always wondered whether there was a whole weird side to that.”

We asked if there was a singular point in his intense preparation to play Stephen when he finally thought he got it. “You never think you get it, particularly when you’re playing someone who is living, and you’ve met him, and you’ve watched every bit of footage,” said the young actor, who has already won an Olivier and a Tony.

“Because we couldn’t shoot chronologically, James allowed me to see the rushes each night, just to check if all the physical aspects were going OK. It was just endlessly disappointing because [I am] used to seeing the real thing.”

He added, “Every single time, I would see what’s not right, but I suppose what I gleaned from our meeting was this amazing optimism, energy, vibrancy and humor. I took that to the film. For all the things that were thrown his way, he still found humor. There were moments when I felt like I caught that.”

Indeed, his delineation of a man whose humor is as strong as his mind, invests his portrayal with humanity and appeal.

Eddie pointed out, “The other night when, I think, you saw the film (he meant us), was also the first time I’d seen it with an audience. Those moments of laughter made me so happy because meeting him was one of my funnier experiences.”

The actor, who will be seen next year in Andy and Lana Wachowski’s sci-fi adventure “Jupiter Ascending,” was just as engaged when he talked about Hannah, a financial publicist.

Congratulated on their engagement, Eddie said that, at 32, he was not exactly young. “I was getting a few gray hairs.”

“It’s love,” he joyfully proclaimed about what led to the engagement. “We first met when we were 15. It took another 15 years for us to sort it out. She’s an incredible woman, very special. So the fact that she said yes was a huge deal.”

Asked how they met, Eddie related with that impish grin, “I was in a boys’ school and she was in a girls’ school. They were doing a charity fashion show. They brought some guys over. I will never forget I was this pasty boy with freckles. I had to walk topless in the show for this school of girls. As I walked off the stage, the entire school erupted [in applause because] the best-looking guy in the school walked on. It was a very scarring moment.” 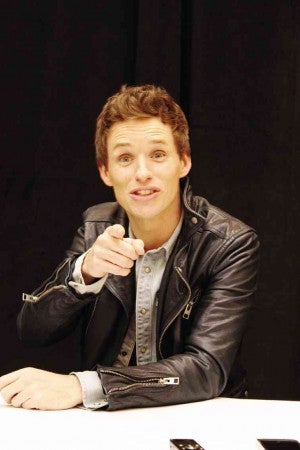 His recollection of the next scene was straight out of a romantic film: “But afterward at the party, I saw Hannah across the room. She was very beautiful, kind and very funny. [I learned that] we had similar interests, that she loved the arts, theater…all the things that were important to me.”

He shared with us the “craziest thing” he has ever done in the name of that four-letter word, love. “When Hannah and I finally got together years later, I had finished rehearsing ‘Les Miserables’ and was about to start shooting it. I had four days off, I was going to Florence by myself—slightly sad.

“Hannah and I went on a date just before I was to leave. We had known each other for a long time, but not closely. I was like. ‘We had a wonderful evening. You wouldn’t want to go to Florence next week, would you?’ She was like. ‘That’s absurd.’ I was like, ‘No, no, no.’ She said, ‘You don’t mean that.’ I was like, ‘I do.’

As to how Hannah deals with all the female attention being showered on him, Eddie explained, “She’s pretty amazing about it, actually. She loves her work. When she can take a holiday, she comes with me. Artistically, she’s very interested, too.”

He continued: “The great thing about acting is, you have very intense periods. But after this film, I was quite broken. I haven’t worked since so I took a long time to get back to my own body weight, my own self. It’s lovely to get her counsel; she’s incredibly grounding.”

Having recovered from the intensity of playing Stephen, Eddie will play Danish painter Einer Wegener opposite Alicia Vikander in Tom Hooper’s “The Danish Girl.”

Talking more specifically about rabid female fans, Eddie said, “I’m very lucky that a lot of my fans are incredibly generous people. Some of them sometimes will take photos with Hannah. I think she feels that they’re very generous to her. In any relationship, we’re constantly reassuring each other. But she’s very supportive in that sense.”