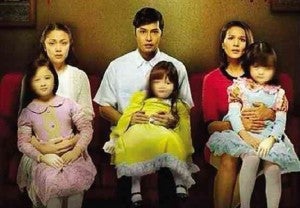 Wenn Deramas first foray into horror has all the elements of an effective screen chiller—a terrifying back story about a crime that has been conveniently swept under the rug, grieving parents (Jodi Sta. Maria, Iza Calzado, Zanjoe Marudo) who can’t get over their children’s untimely deaths, and creepy talking dolls that go bump in the night.

Contrary to the grade of B it inexplicably got from the Cinema Evaluation Board, the film is more of a hodgepodge of flimsy, half-baked stories than fully realized tales that ooze with danger and cautionary pertinence. In fact, the movie is more vexingly funny than scary.

But, the idea of an “ambulant” shrink who peddles his “merchandise” in coffin-like boxes should have instantly given away Dr. Apacible’s sinister intentions. Moreover, the atrocious dolls could turn disturbed patients into full-fledged basket cases, because they look more menacing than calming or reassuring—which is crucial in the management of “delicate” psychiatric cases, especially those manifesting major depression (like Jodi’s character, a textbook case)!

Indeed, there’s a fine line that separates gullibility and stupidity—though, if the trio’s minds were lucid, there wouldn’t be a story to tell in the first place—! Stella could have avoided the “supernatural” abuse if she had trusted her initial reaction to her doll: “Hindi ako ang baliw kundi ikaw,” she yells at the sneering, intrusive doctor. In the next scene, however, she picks up the doll and treats it like her own child. —Now that’s scary!

Julio and Faith also choose to ignore the red flags they see—especially the former, who keeps seeing sinister visions of a dead boy, even before the accident. As Deramas sees it, there’s good reason why his protagonists choose to look the other way—but, we’re not spilling any spoilers here.

“Maria Leonora Teresa” doesn’t have the sinister edge of “Chucky.” You will occasionally jump in your seat, not because of the production’s ability to build up an atmosphere of dread and foreboding, or its creeping sense of doom, but because of “scarifying” tricks that quickly overstay their welcome. You see most everything coming, so the element of surprise is compromised.

Suffice it to say that, however the development of the quickly paced but tonally feeble film’s intersecting stories is explained, it’s dodgily deficient and, yes, kitschily hilarious—which is OK if this were a comedy, because that’s right up Deramas’ alley.